Forty climate activists have closed down the rail line into the world's biggest coal port this morning, (Sunday December 20) protesting the failure of the UN climate talks in Copenhagen to produce a just, effective, and legally binding treaty.

Twenty five of the diverse group - aged from 19 to 86 years and including a Buddhist priest, and an elected local councillor - are occupying a rail bridge in Newcastle, Australia, and refusing to leave. They have hung large banners reading "Greed wrecked Copenhagen: Now it's up to us all", and "You could have done something great."

Three hours into the blockade, police have arrested ten people who were sitting on the rail bridge and refusing to move. Protesters expect the blockade to last for the remainder of the day and perhaps into the night, with a further 15 people still blocking the bridge in difficult to remove positions.

Update 3.00pm: According to Rising Tide police have removed the final protester blockading a coal rail bridge in Newcastle, Australia, more than six hours after protesters shut down the coal delivery line into the world's biggest coal port.

There were twenty three arrests in total at the protest, including an 86 year old man, a Buddhist priest , and an elected Newcastle city councillor. 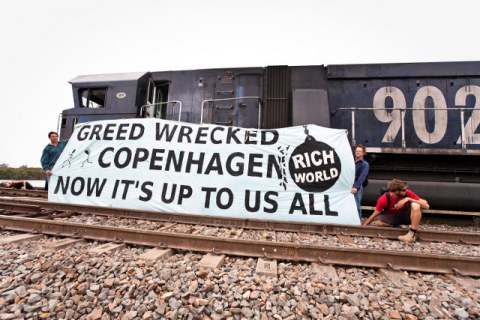 The world's leading climate scientists have been embarrassed by the publication of private emails that hide the decline of global temperatures. This is a message to the environmental movement.
http://www.youtube.com/watch?v=5Hftsk4gWqI

Fall Of The Republic documents how an offshore corporate cartel is bankrupting the US economy by design. Leaders are now declaring that world government has arrived and that the dollar will be replaced by a new global currency.

President Obama has brazenly violated Article 1 Section 9 of the US Constitution by seating himself at the head of United Nations' Security Council, thus becoming the first US president to chair the world body.

A scientific dictatorship is in its final stages of completion, and laws protecting basic human rights are being abolished worldwide; an iron curtain of high-tech tyranny is now descending over the planet.

A worldwide regime controlled by an unelected corporate elite is implementing a planetary carbon tax system that will dominate all human activity and establish a system of neo-feudal slavery.

The image makers have carefully packaged Obama as the world's savior; he is the Trojan Horse manufactured to pacify the people just long enough for the globalists to complete their master plan.

This film reveals the architecture of the New World Order and what the power elite have in store for humanity. More importantly it communicates how We The People can retake control of our government, turn the criminal tide and bring the tyrants to justice.

A film by Alex jones

I watched the whole protest as i fished with a friend. What a complete waste of resources. For 7.5 hrs they wasted the time of around 30 police on boats and land. I do not think this is the way to get a point across. The only message i got from the protest is that they. Enjoyed wasting the time of people who work for a living. I completely agree with what they are saying but feel this is not the way to do it.

I BET THEY ALL WENT HOME TO THEIR HOMES AND TURNED ON THE LIGHTS, THE OVEN,THE TV AND THOUGHT NOTHING OF IT. Hello they spent 6hrs driving up & down the river in a RUBBER DINGHY with a petol motor. Bit hypocritical don't you think. In two cars that burnt petrol.

HELP MAKE THIS VIDEO VIRAL!! SEND THIS IMPORTANT MESSAGE TO EVERYONE YOU KNOW.