Fifty protestors were arrested on Thursday 19th November in an act of civil disobedience on the steps of the Tasmanian Parliament in Hobart. The protestors were not only calling for the mill to be stopped but against the corrupt passing of the Tasmania Pulp Mill Assessment Act that fast tracked approval of the Mill.

The arrest received more media than usual because 83 year Peter Cundall, former host of gardening Australia was amongst those arrested. Upon being arrested Peter told the arresting officer: "I am also protesting about the conditions of the police force and their lousy wages"

While being lead away he told a reporter: "Because I am concerned I am doing this not because I want to but I feel I'm being forced to. I have the greatest respect for the rule of law but in this case I have no choice but to stand up for what I believe is Tasmania. This beautiful State is being destroyed environmentally and democratically. The whole of democracy is in jeopardy and I'm fighting against it" (Source: ABC News)

The quote below was obtained from the SMH site. http://news.smh.com.au/breaking-news-national/cundall-charged-after-pulp... Mr Cundall said the planned mill's construction was a source of economic, environmental "and above all democratic" damage."

"I'm here because I'm opposed to the corrupt mechanisms, and it was corrupt, that (Tasmania's) Pulp Mill Assessment Act went through in parliament," he told reporters. "It was a terrible thing that basically a proponent of the mill can actually make major donations to a party or both parties, and help to actually write the legislation, and it is then passed through parliament, with the members of parliament not allowed to oppose it or amend it.

The protest was organised by the group Pulp the Mill which promotes non-violent civl disobedience against the mill. http://www.pulpthemill.org/ 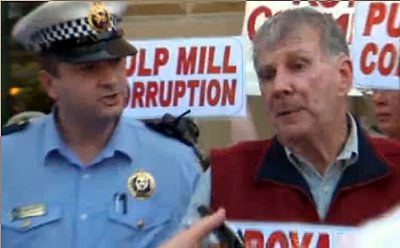 We are fighting for the right to be honestly represented.

We are all being diminished by the destruction of our natural enviornemnt. It is a fact that so called representative govenment is party to the systemic destruction of old crowth forest and habitat. The Government is being induced by corporations with money to spend on political influence, who are anything but good corporate citizens. Once again we witness the ever so polite rejection of the governments abuse of mandate. Flagged by Mr. Peter Gundall at 83 his voice was heard around the world. He fears what we all fear the growing abuse of power the same power we vested in trust with people whom we expected to do the bidding of the people. Party politics has become a tool of political abuse. Abuse of our due process. In twenty years so much of what we cherrish now will be gone. And along with that loss will go the right of everyone to honest democratic representation.
Edward James. Umina Central Business District

Re: Fifty arrested over pulp mill in Tasmania

What a sad day it is when no one else can be bothered posting a comment Are you all slaves to a particular political party or could it be you just dont give a frutfly? Edward James. Activist. Umina CBD. NSW

People are reading the article at least

Hi Edward - over 300 people have read the article at least, even if they haven't commented. I would also encourage people to comment on stories they feel passionate about though - even if it is only a sentence or two to say "right on" as it makes for a more interesting site for everyone.