The 25% cut in the Australian quota for Southern Bluefin Tuna has been described by the Wilderness Society as a step in the right direction, but the cut is too little too late with the fish species teetering close to the edge of extinction. The Quota reduction was made in an agreement at the Commission for the Conservation of Southern Bluefin Tuna meeting in South Korea in October 2009. The fish was listed in 1996 as Critically Endangered on the IUCN Red List of Threatened Species.

"Every indication is that the Bluefin Tuna population is crashing toward extinction," said Felicity Wade from The Wilderness Society. "While it is heartening to see governments finally acting on its plight, the 20% international cut is inadequate for the crisis the blue fin tuna is facing. Australia had the largest quota reduction.

"If we were serious about bringing this fish back from the brink," concluded Ms Wade, "the fishery would be completely closed while populations recovered."

TRAFFIC's Global Marine Programme Leader Glenn Sant said that the Southern Bluefin Tuna populations would not recover for many years, even under the best scenario. "The members agree it is a crisis with the breeding stock being somewhere between three and eight per cent of its original level," said Sant. "A 20 per cent cut is a step towards resolving the terribly low level of Southern Bluefin Tuna Stock, with the scientific assessment of the scenario saying there could be recovery, but only after many years."

Conservation organisations at the meeting which included WWF and TRAFFIC had asked for a temporary closure of the fishery, while Australia had requested a 50 per cent cut in catches. The Commission for the Conservation of Southern Bluefin Tuna is a voluntary fishery management group comprised of Australia, Japan, New Zealand, South Korea and the Philippines as a formal cooperating non-member. Much of the Southern Bluefin Tuna catch ends up in Japan where it is prized as sushi and sushimi.

Japanese, Korean, Indonesian and Taiwanese Bluefin tuna fleets use long line fishing which results in the incidental deaths of thousands of seabirds, particularly petrels and albatross. "The 20% reduction in SBT quota is insufficient to give the species a chance to recover and still means the likely death of 10,700 albatross each year", said Nicola Beynon, Humane Society International (HSI) Senior Program Manager. Most of the Australian catch is done through netting for aquaculture sea farming, minimising sea bird deaths.

According to HSI the Scientific Committee to the Commission has estimated the SBT population is at a mere 3-8% of its pre-exploitation biomass and only a zero quota would give the species a decent chance to recover. HSI and other conservation organisations have pushed for the Commission to suspend the global catch until fish numbers recover to sustain ecologically sustainable harvests.

The tuna fishing industry in Australia is centred on Port Lincoln in South Australia. Australia's average catch per year has been reduced by 30% from 5265 tonnes to 4015 tonnes over 2010 and 2011, and the global catch quota reduced by 20 per cent from 11,810 tonnes to 9449 tonnes along with 20 per cent reductions to other countries.

In 2005 Humane Society International fought a tough court case against the Australian Federal Environment Minister Ian Campbell to defend the endangered southern bluefin tuna from chronic overfishing. The society were appealing for protection of the fish as an endangered species, with the Southern Blufin Tuna meeting the criteria for listing as threatened as advised by the Threatened Species Scientific Committee. HSI lost the case.

For 20 years Japan plundered the Southern Bluefin Tuna Fishery. Japan's overfishing through an Experimental Fishing Program (EFP) was challenged by Australia and New Zealand in 1999 with provisional measures granted pending Arbitration in the International Tribunal for the Law of the Sea. The Tribunal's Order effectively applied the precautionary approach to fisheries management and highlighted the argument that unilateral experimental fishing cannot exceed a State's national allocation. (The Southern Bluefin Tuna Case: ITLOS Hears Its First Fishery Dispute)

A 2006 report by the Commission for the Conservation of Southern Bluefin found that Japan had illegally caught up to $6 billion worth of the fish over the past 20 years. The report said that if Japan had stuck to its catch quota, the stock of Southern Bluefin would be at least five times larger.

The northern bluefin tuna also faces overfishing with the Prince of Monaco applying for a CITES listing which would ban the trade in the species for commercial purposes, placing much more pressure on the southern bluefin tuna.

The scientists from the International Commission for the Conservation of Atlantic Tunas (ICCAT) met in Madrid, Spain (21-23 October) to assess current stock status of Atlantic bluefin tuna against the specific criteria necessary to list a species under Appendix I of the Convention on International Trade in Endangered Species (CITES). ICCAT's scientists estimate that the current spawning biomass is less than 15 per cent of what it once was before fishing began - meaning Atlantic bluefin tuna meets the criteria for a CITES Appendix I listing.

"What's needed to save the stocks is a suspension of fishing activity and a suspension of international commercial trade - this is the only possible package that can give this fish a chance to recover," said Dr Sergi Tudela, Head of Fisheries at WWF Mediterranean. "We must stop mercilessly exploiting this fragile natural resource until stocks show clear signs of rebound and until sustainable management and control measures are firmly put in place."

WWF and Greenpeace are urging ICCAT to impose a zero quota at the organization's next annual meeting on 6-16 November in Recife, Brazil. The application for CITES Appendix I listing will go before the 175 CITES member countries to decide at the next Conference of the Parties of CITES, in Doha, Qatar, in March 2010. 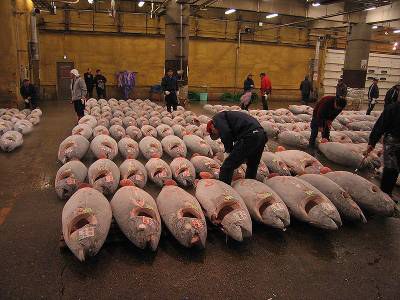 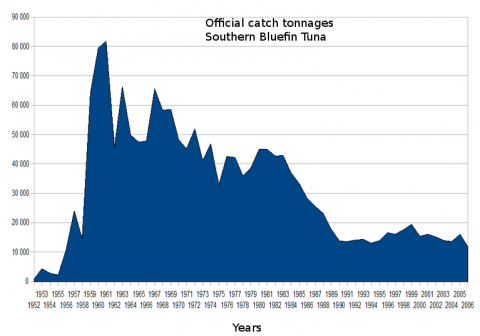 Another reason for environmentalists to stop eating animal products - and yes fish ARE animals.