The Sea Shepherd’s Vessel the “Steve Irwin” will be docking in Brisbane,Sydney, and Fremantle as part of its tour of Australian ports before heading off to the Antarctic for another Summer of tackling the Japanese whalers with direct action, in “Operation Waltzing Matilda” . The operation was named in recognise the support of the Australian people, which is in sharp contrast to the opposition of the Rudd Government who is currently blocking Paul Watson and his 1st Officer’s visa pending “character tests” and them providing their international police records.

This act of harassment is obviously an attempt to placate the Japanese Government who have been calling on Australia to crack down on the Sea Shepherd. It is an expensive delay for the Sea Shepherd and may take months to sort out, in which time the ship may have had to leave for the Antartic. It has led Paul Watson to be nostalgic about the Howard Government, who never hassled the Sea Shepherd in this way and took at stronger stance at the IWC.
http://www.seashepherd.org/news-and-media/news-091006-1.html

In other news the Sea Shepherd is fitting itself out with a water cannon for this years operation to counter the use of water cannon by the Japanese whalers last year
http://www.theaustralian.news.com.au/story/0,25197,26070750-30417,00.html

The places and times the Sea Shepherd Tour dates are:
Sydney – October 5-12 at Circular Quay
Hobart – October 16-22 at Macquarie Wharf
Fremantle – November 4 to December 7 at C Berth in Fremantle Port
All our welcome to visit the Sea Shepherd and take a tour to offer support and learn more about the issue.
http://www.seashepherd.org/australia/ 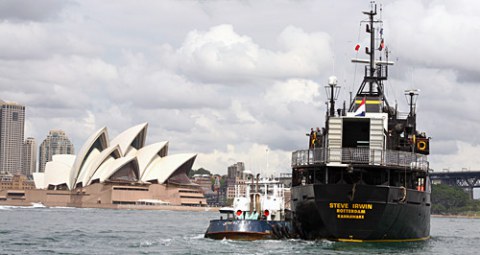