US out of Latin America - Protest at US Consulate, Melbourne, 11 September

While the US flag flew at half-mast in memory of the victims of 11 September 2001, representatives and supporters of the Latin-American communities in Melbourne held a small rally to remember the victims of the US-inspired coup in Chile on the same day in 1973, and to demand an end to US interference in the affairs of Latin America.

The numbers were small, possibly reflecting the fact that someone had apparently seen fit to spread disinformation to the effect that anyone attending the rally would be arrested, but as Lucho from LASNET, the organisers of the rally, put it, the important thing was to show that the past had not been forgotten, even here on the other side of the world, and that protests would continue regardless.

There was no formal agenda, but a succession of speakers recalled the history of US interventions in their southern neighbours, a region which one said the US regarded as its backyard, which it felt entitled to control. This was accompanied by a forecast that the current withdrawal from Iraq and eventual withdrawal from Afghanistan would leave the military complex looking for 'somewhere to go', hence the push for bases in Colombia, one of the main themes of the rally. There was a reminder of the part played by Australia in the Chile coup, through the communications facility at Pine Gap used by US forces at the time of the Pinochet coup, and commentary on the situation in Honduras. Much of the proceedings was in Spanish, as was only right, though doubtful how much would have penetrated to those inside.

There was a minute's silence for victims, in Chile and elsewhere, and proceedings were punctuated by chants of "Out, out, US out!", "Gringos go home!" ...

When protesters arrived they found four AFP cars lined up waiting. Perhaps they also had been fed some mis-information?

A film and discussion night originally scheduled for the evening at Trades Hall has been postponed to Thursday, 24 September, at 6:30 for 7:00pm.

From the LASNET media release:
>>>>>>>
We call to denounce the systematically violation of people’s and indigenous rights in Colombia from the Uribista government and the capitalist partners that accompanies it...

We call to intensify our solidarity and support to the political-social movements and indigenous organisations that fights for their rights... We ask ourselves, who are the real terrorist?

For our memory...our tribute to all those that fought against the Pinochet’s dictatorship imposed on September 11 in 1973 with U.S. backup and support, country that not stop its violence against our people.
>>>>>>> 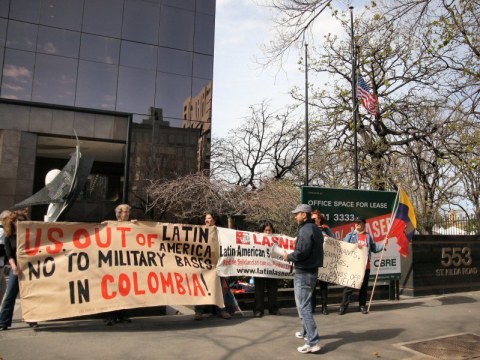 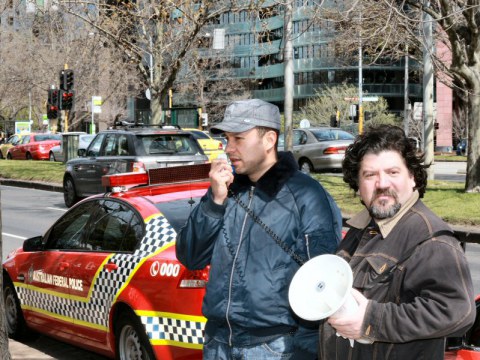 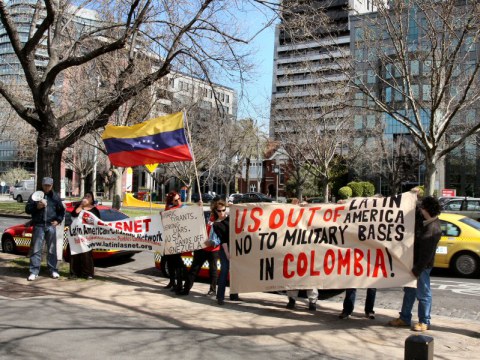