Support for people of Honduras - 15 August

While the repression following the coup d'etat continues in Honduras so too do the protests, both there and around the world: last Tuesday was a global day of action called by Via Campesina Honduras (http://www.viacampesina.org), and in Melbourne LASNET held a meeting that evening at Friends of the Earth in Collingwood, followed by a rally at Federation Square on Saturday August 15. Here leaflets were distributed with details of an overnight attack on the offices of Via Campesina (http://www.viacampesina.org/main_en/index.php?option=com_content&task=vi...)and there was footage on dvd showing the military attacking people in the streets, threatening reporters, and much more - the footage was taken from TelesurTV, which has a section devoted to coverage of the coup: http://www.telesurtv.net/noticias/afondo/especiales/Golpe_de_estado_hond... People were urged to spread the word of what is happening in Honduras, and also to call on the Australian government to take a stand. Friends of the Earth in Honduras is reported to have been targeted for allegedly spreading misinformation, ie the truth about the repression, and FoE Australia has issued a statement condemning the coup: http://www.foe.org.au/news/2009/foe-statement-on-honduras (see also http://www.movimientomadretierra.org/).
More rallies will be held and hopefully the numbers will grow; there are also plans for a protest at the US Consulate on 11 Sept, basically on the theme "US out of Latin America", with the focus originally on Colombia but now extended to Honduras and beyond (September 11 is of course the anniversary of the 1973 US-backed military coup in Chile ...)
See http://www.latinlasnet.org/node/298 for more on this event. 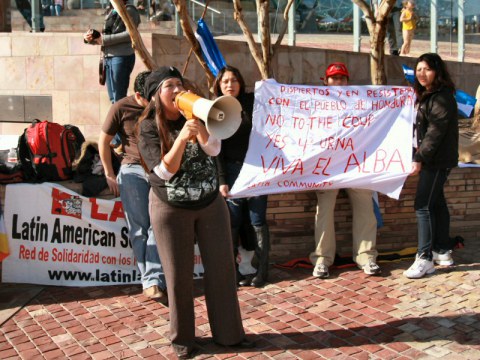