Fascists under the cover of cops attacked the oldest anarchist squat in Greece with molotov cocktails and beaten a youth. Our comrades successfully driven away the fascists. The squat, Villa Amalia, suffered no damage.

From Wikipedia: "Villa Amalia is one of the first anarchist squats in Athens, Greece. It was first occupied in 1990. It is located in the corner of Acharnon and Cheyden streets, near "Victoria" square. Many punk, rock, hardcore and generally underground events take place at Villa Amalia. The police have evicted the squatters three times, but Villa Amalia has always re-occupied later on."

Many comrades consider it the oldest anarchist squat in Greece and a symbol for the local anarchist movement. In Greek it is called Villa Amalias (Βίλλα Αμαλίας).

During the night of 9 July 2009 at 23:50, a gang of about 30 neonazi fascists supported by cops (both MAT, the Greek riot police, and Deltas) attacked the Villa Amalia squat in central Athens with molotov cocktails. The anarchists successfully defended their social centre against the fascists and driven them away, but not before they severely beat a youth nearby who needed an ambulance (still unclear whether he is a comrade).

The attack must have been pre-arranged by the cops and the fascists; after all their collaboration is well-known in Greece and is becoming more and more official (with dignitaries paying visits to the fascists). We cannot explain in any other way the fact that, according to still unconfirmed information, comrades who were on the nearby Liosion street at 21:00 spotted about 70 cops (of the Deltas team, not riot police). If true, then we must assume that they were the same cops who, together with riot police, were seen protecting the fascists during their attack against the anarchist squat.

The fascists, who must haven been members of the Golden Dawn neonazi association, approached the squat first, keeping themselves at a distance of about 50 metres, and shortly afterwards Delta cops appeared. MAT riot cops quickly came when more anarchists gathered in solidarity to defend their squat, Villa Amalia.

The fascists threw two molotov cocktails, the traditional people's street weapon, against the symbolic Villa Amalia squat, but they failed to damage it due to their lack of skill in molotov throwing. The anarchists successfully driven out the fascists towards the Acharnon street, but the fascists then took cover behind a group of Delta cops, who together with the MAT riot police protected the fascists.

The fascists then severely beat a youth outside the squat, but it is still unclear whether he is a comrade. He had to be taken away by an ambulance, due to the hatred released on his body by the neonazis.

By 24:10 all the fascists were driven away by anarchists, of both genders, who were determined to selflessly defend their freedom and the oldest anarchist squat of Greece with a history of two decades. By 24:20 the surrounding streets were still infected with cops (Deltas and 2 or 3 MAT riot police squadrons who were seen talking with the fascists). Lots of comrades were gathered outside the squat to protect it in case the cops decided to raid it, but the cops preferred to back down and leave, knowing how dangerous people fighting for their freedom can be.

At 24:30 about 30-40 Delta cops were spotted leaving the region towards the Patisia district.

The fascists with their molotov cocktails apparently not only wanted to damage the squat but also to injure comrades, but they failed miserably to do either. Their only 'success' was that they managed to hide behind the cops and leave. But in their panic, they left behind lots of traces. They had a rucksack full of molotov cocktails and smoke bombs, but they only managed to throw two molotovs and two smoke bombs, the latter two thrown at the pedestrian strip opposite the squat. As the anarchists moved to defend their squat, the fascists threw their rucksack on the street in their panic as they were running to hide behind the cops.

At 2:00 the a popular news network, as is usual with all capitalist spoonfed news outlets, said that an incident took place in central Athens and spread the propaganda that the cops are searching for the perpetrator of the molotov-throwing incident. But as every reader of Indymedia IMC knows, the cops' real job is to protect the fascists during their attacks.

It is interesting to note that while the left feels paralyzed in Greece, the anarchist movement wins the hearts of more and more dissatisfied people and seems to be the only social movement capable of revolutionary groundbreaking social change.

As a final note, we should say that the anarchist movement is very old, but now that the capitalist class implements its globalization project and social democracy and communism have failed, we should expect more popular support for anarchism worldwide. Perhaps the society envisaged by Kropotkin, Bakunin, and even more ancient thinkers will soon come true.

Inside the Villa Amalia squat there is a banner on a wall containing a verse written by an Ancient Greek philosopher:

translation in English: "I want neither to rule nor to be ruled" - Herodotus Histories 3:83

Article (in Greek) and photos from the squat: http://athens.indymedia.org/front.php3?lang=el&article_id=70592

We do need your help in spreading and translating this news! Please do spread around and translate in more languages. 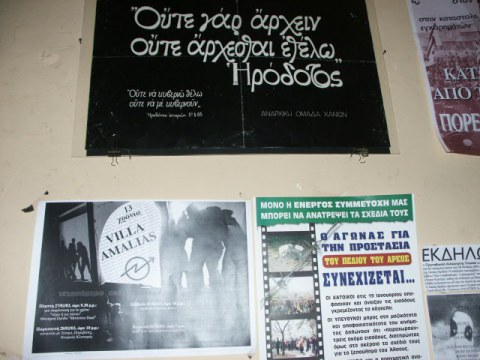 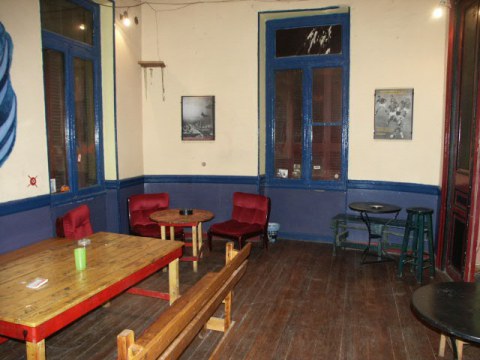 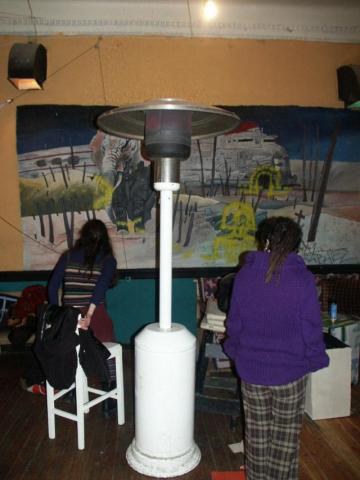 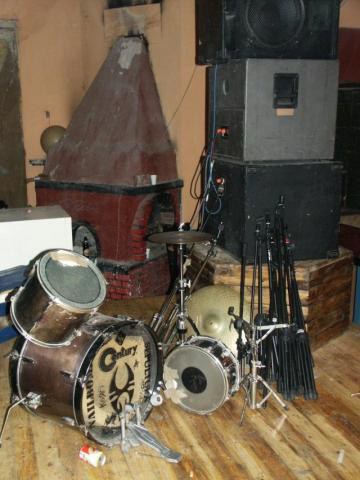