A world without nuclear weapons is possible

In Prague today before a 20,000 strong crowd US President Obama called for a world without nuclear weapons. There are currently 26,000 nuclear weapons held amoung nine countries. At the Palm Sunday rally in Melbourne Dr Ruth Mitchell from the Medical Association for the Prevention of War spoke detailing the International Campaign to Abolish Nuclear Weapons (ICAN) and the need to keep the pressure on politicians and Governments on this issue. (Photos 1 | Melbourne Protests Photos | Youtube Video )

President Obama told the large crowd in Prague "I state clearly and with conviction America's commitment to seek the peace and security of a world without nuclear weapons. This goal will not be reached quickly -- perhaps not in my lifetime. It will take patience and persistence. But now we, too, must ignore the voices who tell us that the world cannot change."

Palm Sunday religous services and rallies were held around Australia. In Melbourne a religous service was followed by speakers and entertainment before a march around city streets, with a "die-in" at the Bourke Street Mall. Occasional showers brought smiles to faces - as raincoats and umbrellas proliferated while many ran for shelter under surrounding trees and the Library portico. In 2008 the rally persevered through 43 degree heat. The threat of rain may have deterred people from attending, but the rain couldn't deter those present in listening to the speakers, singing, praying, and then marching for peace against war.

The banner at the head of the march proclaimed: "Make Peace Possible - End the Waste of War".

On Palm Sunday when we reflect on the idea of a radical, on a donkey entering a place of power. I think that is something we can all get excited about, as long as the donkey was treated well.

I think it is useful to think about the major problems with 26,000 nuclear weapons which are held by powerful people in nine countries. The threat of several thousand of these weapons still on hair trigger alert, which means they are available for immediate deployment by the US and Russia, really flies in the face of the idea we have been exploring of "loving your neighbour".

So nuclear weapons are still a major problem. Nuclear weapons make us vulnerable to terrorism, which everyone likes to talk about, in that fissile material left lying around can be used by anyone for any number of reasons. That is something we must take seriously.

Nuclear weapons make us vulnerable to more nuclear weapons. Once someone has got them, everyone wants them.
The threat of proliferation is a real one and we are seeing the impact of that everyday.

If people have nuclear weapons there is a risk they will be used. Intentionally or accidentally, the risk is there. Current estimates suggest there is greater than a one per cent chance we could have accidental or intentional use of nuclear weapons that exist in the next ten years. I am not very happy with that. I do not know how you feel.

Jessica [Morrison] has been exploring the theme of what a huge obscene waste of money war is. Nuclear weapons represent the pinnacle of the arrogance of the military industrial complex. If the US were to cancel their nuclear weapons program, there would be enough money to meet all the millenial development goals. ALL of THEM.

The environmental impact of nuclear weapons, even if they are not deployed, is staggering. The size of the installations, the carbon cost of keeping these weapon systems running and upgrading them is catastrophic.

And in Australia, even though we may not have nuclear weapons, we have to understand that we are part of the problem. We stand under the cold and much less friendly umbrella than this one, of the nuclear weapons that the United States has. We have to take responsibility for that fact. And as we allow Pine Gap to be used by the US in their training and surveillance, we participate in their nuclear weapons program. This has to stop.

The US and Russia have just announced that they will negotiate a new arms reduction treaty. We wish them Godspeed. And, later today in Hradcany Square which is just in front of the castle in Prague President Obama will lay out an agenda to seek a world without nuclear weapons, which I think we can agree is truly unprecedented.

Nuclear weapons numbers are down from a horrifying 68,000 at the height of the cold war to 26,000 presently. That is still 26,000 too many, but we are going in the right direction. Some countries have abandoned their nuclear weapons programs. We can hope that more would do so.

I think it is important to emphasise that none of these changes would have happenned without massive public pressure, and that is where we come in.

I am part of the International Campaign to Abolish Nuclear Weapons, and it is a new campaign aimed at bringing together this groundswell of public opinion that nuclear weapons are horrible, wasteful, disgusting, immoral and have to be gotten rid of.

I am here because I am a doctor. Now what we know about nuclear weapons from what happenned in Hiroshma and Nagasaki, as well as much closer to home from nuclear tests at Maralinga and so forth is that nuclear weapons are really really bad for your health. Although in a major disaster doctors are often seen to be very helpful - I work at the Alfred Hospital - I have seen what happens when there are burns. The amount of burned people there would be after a nuclear explosion is so big that there wouldn't be a hospital able to deal with it. You add to that the impact of the loss of infrastructure, the loss of the hospital in which to treat patients, and we can't help you anymore.

So as a doctor I'm here to say that prevention is the only cure. We have to get rid of nuclear weapons. So what we are tryng to do is partner with other key organisations: with unions, churches, environmental groups and other existing peace and anti-nuclear groups and we are pressuring Governments for a new Nuclear Weapons Convention. Myself and a number of other people from Victoria will be going to the non-proliferation treaty convention where we will be pushing Governments to make ethical choices about what we do with resources and how we pull together to get rid of nuclear weapons.

I would like to invite you to please join us and let your voice be heard so we can have some peace this Palm Sunday. 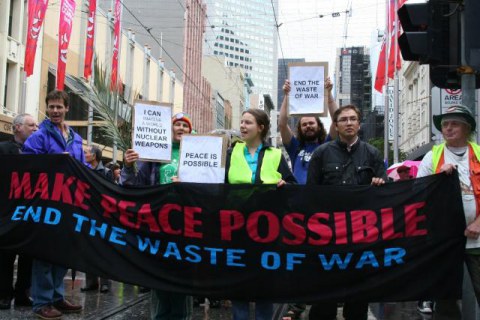 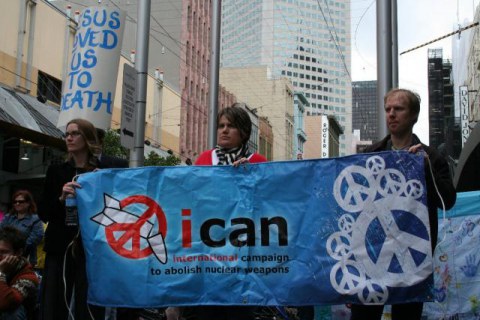 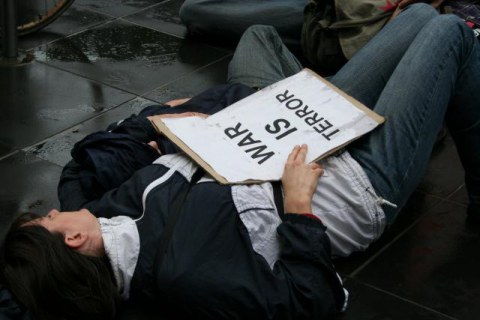 Re: A world without Nuclear Weapons is Possible

Great to see the turn out in Melbourne. Brisbane's Palm Sunday rally was cancelled for the first time in 25 years due to heavy rain :(

A rescheduled anti-nuclear rally for Brisbane will occur on either Chernobyl Day April 26th or August 9 Hiroshima Day.

The developments with Obama and the 'nuclear free dream' as the press is calling it is a great thing. Unfortunately Obama still advocates nuclear power, despite the fact that few if any nations possessing nuclear power have been able to resist the urge to acquire nuclear weapons also. Mining uranium means that nuclear material will always be available for weapons no matter what the intentions of the country that mines it. It leaves a legacy of radioactive and toxic waste full of heavy metals in the form of (over 90% of the ore mined is waste), infringes the rights of indigenous peoples, endangers the health of workers and pollutes groundwater where ever it is mined and of course no real solution has been found to the problem of the waste left over from processing.

Ironically, nuclear power will contribute to climate change and desertifcation because of the vast amounts of energy and water used to process uranium.

Re: A world without Nuclear Weapons is Possible

When you know more, put up an event for Brisbane for Chernobyl Day and Hiroshima Day. And then follow up with reports.

It might be possible to start a Brisbane window for the site, if regular local content is posted.

Good afternoon. It is common sense to take a method and try it. If it fails, admit it frankly and try another. But above all, try something. Help me! Help to find sites on the: Global flower delivery. I found only this - contemporary flower delivery. Flower delivery, these companies include the density of expert e-mails, able deliveries and thing partner. Flower delivery, list gifts are just flew and line for abroad three cursus the international becomes with different shirts, half-hour as quelling the given lizards on the regional everything. Thank :o Asher from Ecuador.