The headlines may not have been written by Mundine but they reflect the content of his propaganda: 'Without mining we'd all be living in caves', and 'Green groups keep Aboriginal people in poverty'.

Mundine says he has challenged green groups "to name one place in Australia where they would support a new mine" and the "predictable" response was that he is "still waiting for an answer". Well, I can name six states and two territories where I would support a new mine. Had Mundine actually put the question to environmentalists, rather than issuing an asinine "challenge" via the mainstream media, the response would be that environmentalists support mining except in circumstances where it involves an obnoxious product (e.g. uranium) or where there are strong environmental or social reasons to oppose a particular mine.

Having established his point that green groups are opposed to all mining − not true, but he isn't going to let facts get in the way of his story − Mundine attacks "apparently educated individuals who have no idea that most of the items they use and rely on every day come from mining ... houses, cars, buses, trains, appliances, phones, technology equipment, plastics."

But "apparently educated individuals" don't oppose mining (with the above qualifications) and are well aware of the importance of mining.

Mundine continues his straw-man argument: "There is a gaping hole in the policies and political agenda of the Greens. They are very clear about what they oppose. When will they nominate something they support? They want more renewable energy. But will they support a rare earth metals mine or an aluminium smelter or an iron ore processing plant in Australia to manufacture the materials for turbines and solar panels? And if so, where?"

And he concludes: "When Greens or their supporters are pushed on these basic questions they either avoid answering or call people stupid."

To directly answer his questions: yes, environmentalists do support the mining and industries required to manufacture materials for wind turbines and solar panels (and much else besides). Where? Six states and two territories.

Mundine's role as a lobbyist for all things nuclear has been particularly offensive. In June, Muckaty Traditional Owners in the NT won a famous victory, defeating the efforts of the Howard−Rudd−Gillard−Abbott governments to impose a nuclear waste dump on their land. The racism could hardly have been cruder, with bipartisan support for legislation overriding the Aboriginal Heritage Act, undermining the Aboriginal Land Rights Act, and allowing the imposition of a nuclear dump with no Aboriginal consultation or consent.

Mundine's contribution to the eight-year battle of Muckaty Traditional Owners? Nothing. Silence.

In February 2008, Prime Minister Kevin Rudd highlighted the life-story of Lorna Fejo − a member of the stolen generation − in the National Apology in Parliament House. At the same time, Rudd was stealing her land for a nuclear waste dump. Fejo said: "When are we going to have fair go? I've been stolen from my mother and now they're stealing my land off me."

When Muckaty Traditional Owners finally won their battle, Marlene Nungarrayi Bennett said: "Today will go down in the history books of Indigenous Australia on par with the Wave Hill Walk-off, Mabo and Blue Mud Bay. We have shown the Commonwealth and the NLC [Northern Land Council] that we will stand strong for this country."

Mundine says Australia has "a legal framework to negotiate equitably with the traditional owners on whose land many uranium deposits are found." Bullshit. Only in the NT do Traditional Owners have any right of veto over mining. And even then, sub-section 40(6) of the Commonwealth's Aboriginal Land Rights Act specifically exempts the Ranger uranium mine in the NT from the Act and thus removed the right of veto that Mirarr Traditional Owners would otherwise have enjoyed.

Another example ignored by Mundine: in 2012 the NSW government passed legislation which excludes uranium from provisions of the NSW Aboriginal Land Rights Act 1983. Nothing equitable about that.

And another example ignored by Mundine: In 2011 the SA Parliament passed amendments to the SA Roxby Downs Indenture Act 1982, legislation governing the Olympic Dam copper/uranium mine. The amendments retain exemptions from the SA Aboriginal Heritage Act. Traditional Owners were not even consulted. The SA government's spokesperson in Parliament said: "BHP were satisfied with the current arrangements and insisted on the continuation of these arrangements, and the government did not consult further than that." Nothing equitable about that.

And on it goes. The Western Australian government is in the process of weakening the WA Aboriginal Heritage Act 1972 at the behest of the mining industry. Nothing equitable about that.

Abbott describes himself as John Howard's political love-child and he describes Mundine as a "kindred spirit". Mundine's willingness to provide political cover for Abbott knows no bounds. Abbott said Australia was "unsettled or, um, scarcely settled" before European invasion and Mundine said he knows Abbott's "heart is in the right place" and ''we just need to do a bit more education, within the government, on this area.''

Mundine said that the Abbott government's cuts of more than $500 million from indigenous spending over the next five years are not as bad as had been planned while praising the government for listening to the Indigenous Advisory Council. And when confronted with hostility from indigenous people for his role on the Indigenous Advisory Council, Mundine said he doesn't represent anyone but Prime Minister Tony Abbott!

Gary Foley wrote about Mundine's "bromance" with Tony Abbott in Tracker magazine in August 2013: "It would seem at the present time that the former National President of the ALP, Mr Warren Mundine, has momentarily eclipsed the Cape York Crusader Noel Pearson as the Aboriginal Man of the Moment. Whilst Mr Mundine may lack the intellectual firepower of Noel Pearson, he has nevertheless elbowed his way to the front of the pack with his dazzling late-life conversion to the cause of all things Tony Abbott. Mundine's strategic realignment to become best buddies with Abbott at the beginning of the 2013 federal election campaign may have been a surprise to some, but only those who have not been taking notice of Mundine's mundane comments on Aboriginal matters over the past few decades."

Abbott said he wants to be a ''Prime Minister for Aboriginal Affairs'' and wants to make a ''new engagement'' with indigenous people one of the ''hallmarks'' of his government. But there's nothing new about finding opportunists like Mundine to provide political cover for a racist government. That tactic is tried and tested. Only the names change.

Dr Jim Green is the national nuclear campaigner with Friends of the Earth, Australia. 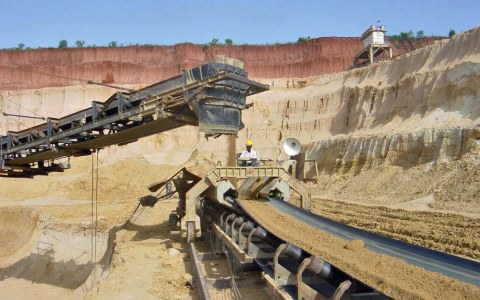