From this research it has been concluded that the year (666 x 3), 1998 was the end of the fifth Sun & the beginning of the sixth Sun, for this is when our Sun began to expand into a Red Giant.

Our star, the sun, was born in the heavens about 4.5 billion years ago. Our sun is about 1/3 of the way through its expected life. Scientists are now predicting the following events during the remaining life of our star. In the next 1.1 billion years, its brightness will increase by 10%. This will super-heat our planet as a result of a severe greenhouse effect. All of the oceans on earth will boil away and all life will be destroyed. In approx 8 billion years the expanding Sun will swallow & incinerate planet earth. Apparently planet Mars will not be incinerated by the expanding Sun, so it is possible that humanity can live on Mars for many billions of years where as all life on planet earth will be extinct in 1 billion years due to Solar radiation.

There are a number of ways to remedy the situation . . .

[1] The primary way to remedy the situation involves the global construction of renewable energy infrastructure using robotics, this is called RREIC, Robotic Renewable Energy Infrastructure Construction. Alot of work has been done all round the world developing prototype renewable energy technology & most of these prototypes have been tested & put into use, achieving good results in energy outputs. Now is the time to begin to implement RREIC, Robotic Renewable Energy Infrastructure Construction & it will take awhile for the basic systems to be outlined by collectives of renewable energy experts from all round the world. We have seen what can be achieved but actually implementing the technology will require robotic systems. The following basic outline of renewable energy technology has already put into use & note each of the following can be broken up into many forms of different technology.

Transport & machinery can then be powered by renewable energy & there will be a surplus of energy produced which can then be used for outerspace colonization.

[2] The secondary method to remedy the situation is to build spacecraft not cars, we want to live on mars, this will involve massive retooling & spacecraft will be constructed to transport very large numbers of people to the Moon, Mars & other places in our solar system & possibly foreign solar systems as well. 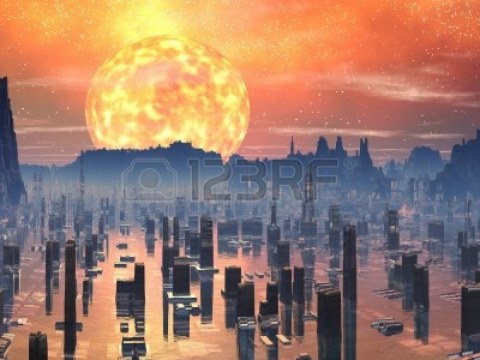 Seeing all of the oceans are going to boil away in a billion years, we may as well use the oceans to build hydrogen rockets. Non-rocket space launch also shows potential.

No rust in space

How to travel faster than the speed of light

If the planet is going to be destroyed & incinerated by the expaning sun in approx 8 billion years, then we may as well destroy the planet ourselves by using robots to transform the planet into fleets of spacecraft.