Flying Foxes are dropping to earth and dying in their thousands from heat exhaustion. The extreme heat in Queensland from the 29 December to 5 January has taken a massive toll of flying fox colonies, warns a wildlife conservation organisation. It is estimated that perhaps hundreds of thousands of native flying foxes have died as a direct result of the record setting high temperatures in the heatwave event across Queensland and north western NSW.

Last year Australia suffered it's hottest year on record, with scientists claiming that extensive fractional risk attribution modelling of 2013 temperatures that this was clearly caused by human greenhouse gas emissions and climate change.

A wildlife conservation organisation, the Bat Conservation and Rescue Queensland Ltd, said that "many colonies across South-East Queensland have been severely affected including those at Camira, Mt. Ommaney, Pan Pacific Gardens, Regents Park, Boonah, Bellmere, Pine Rivers and Palmwoods. Reports indicate all Western Suburbs colonies and inland, and colonies from Gympie down to Yamanto have been devastated."

We tend to think of our own comfort and safety in extreme weather events, but animals and plants can also suffer. Heat related stress is a major cause of increased human mortality during heatwaves. But these events also impact populations of many species such as flying foxes and birds. They can't seek shelter in air-conditioned lounge rooms or shopping centres (except maybe the odd few sparrows). Instead, they fall from their tree roosts suffering heat exhaustion and dehydration.

Flying foxes are nocturnal and act as long distance pollinators and agents for seed dispersal. One species, the Grey Headed Flying-fox, is listed under the EPBC Act and on the IUCN Redlist as vulnerable to extinction. This particular species is decreasing in numbers in Queensland with their range moving south.

"They're one of the best wildlife species around. Unlike possums and koalas, they've got a very strong social structure." Bat Conservation and Rescue president Louise Saunders told the Queensland Times.

Volunteers have been overwhelmed collecting the dead bodies and have brought in over 200 baby flying foxes for care.

“We have never seen this type of heat event devastation before and the massive amount of casualties as a result. From the initial call onwards, the camps fell like dominoes.” said Louise Saunders in a media statement.

Bureau of Meteorology issues special climate statement on the heatwave 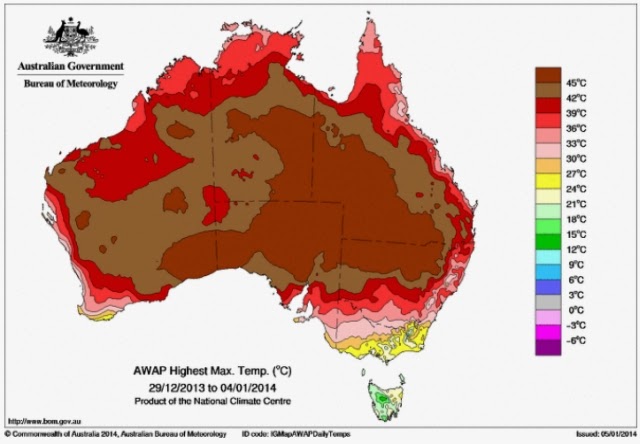 The Australian Bureau of Meteorology said in their summary of the heatwave (see BOM special climate statement 47 - intense heatwave in central and eastern Australia PDF):

The climate statement highlighted that a major feature was the very large margin by which some records were broken, particularly in northern New South Wales. For example, "Narrabri, the 47.8°C observed on 3 January surpassed the previous record by 3.6°C, the largest such margin at any Australian location with 40 or more years of data."

Several locations in southern inland Queensland set all-time records on 29 or 30 December which were then broken again in early January said the BOM statement. Urandangi in far western Queensland near the border with the Northern territory had 5 consecutive days of 45°C or above from 30 December to 3 January. The previous record was 3 days. New heatwave records were set at Barcaldine, Isisford and Hughenden for 10 consecutive days at 40°C or above.

The heat impact on bats is severe. "When the temperatures go over 43 degrees, that's when they are really impacted. It's just total heat exhaustion, so renal failure, the whole gamut. It's just a matter of shutting down," Ms Saunders told the Queensland Times. 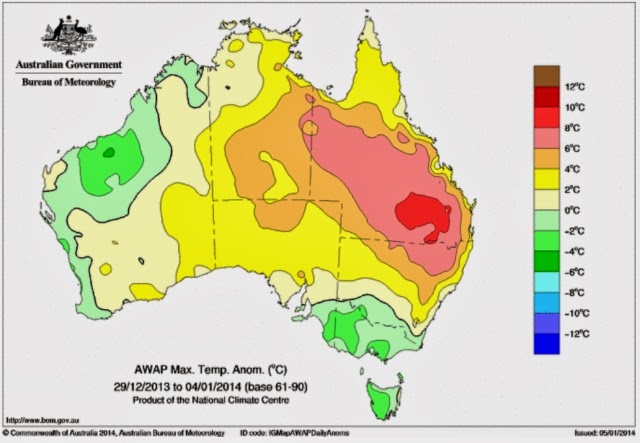 “A huge thank-you to all the dedicated volunteers who rallied to the call and worked so hard in the diabolical heat to save the bats that were still clinging to life”, said Louise Saunders.

Many local residents also assisted rescue volunteers, but BCRQ president Louise Saunders warned that care should be taken as injured creatures could still bite or scratch and may also carry Australian bat lyssovirus which is related to rabies. There have been several human deaths now associated with this virus.

“Never try to perform your own rescue. For your safety and for the sake of flying-foxes, always call a wildlife rescue service,” Ms Saunders said. “A frightened flying-fox is likely to bite or scratch, potentially exposing a well-meaning rescuer to Australian Bat Lyssavirus."

While less than 0.5% of bats may have the virus, anyone exposed to a scratch or bite should seek prompt medical attention said Ms Saunders. There is a vaccine which can be administered to anyone who may be exposed.

“That inevitably means vaccinations for anyone bitten or scratched, and death for the flying-fox because Queensland Health requires them to be euthanased for testing. " said Ms Saunders

Bat rescue carers have been stretched beyond their capacity with the sudden influx of baby flying foxes due to the heatwave. To help them with their work or make a donation visit Bats.org.au or call 0488 228 134 for information. 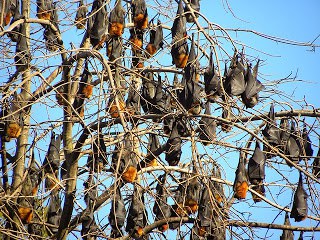