Australia's Bureau of Meteorology (BOM) confirmed on 3 January 2014 in the annual climate statement that 2013 was the hottest year on record for Australia. This was all the more concerning considering the neutral ENSO conditions. 2013 also ranks as the sixth-warmest year since global records commenced in 1880, according to the WMO. In the first week of 2014 Australia is again in the grip of heatwave conditions approaching 50C in some towns.

Related: Sea surface temperatures unusually warm around Australia in 2013 | Climate IMC: 2013 was Australia's hottest year, warm for much of the world say Bureau of Meteorology scientists | SMH: Climate change: It's hot - and not just in the kitchens of bickering MPs | Alex White (Guardian): Australia swelters under a sham climate change policy after hottest year on record

"Young adults under the age of 28 have experienced continuous above average annual global mean temperatures and many in different locations in the world have a lived experience of record heat. Such a state of affairs would be a real worry even if we did not know the cause of this global warming trend. However, we actually know why the global temperature is going up and what is needed to stabilise it and bring it back down again. That some deny the reality of this problem is an indication of their failure to adequately consider the ethics of our situation. Yet, an even greater ethical failure is now being displayed by those in industry, politics and the media who support expansion of our extraction and burning of fossil fuels.”

According to BOM the 2012-2013 Summer was the warmest on record nationally, spring was also the warmest on record and winter the third warmest. The annual national mean temperature was +1.20 °C above average. All States and the Northern Territory ranked in the four warmest years on record. While temperatures were higher, nationally-averaged rainfall was slightly below average for the year, with 428 mm (1961–1990 average 465 mm). Rainfall was mostly below average for the inland east and centre, and above average for the east coast, northern Tasmania and parts of Western Australia. 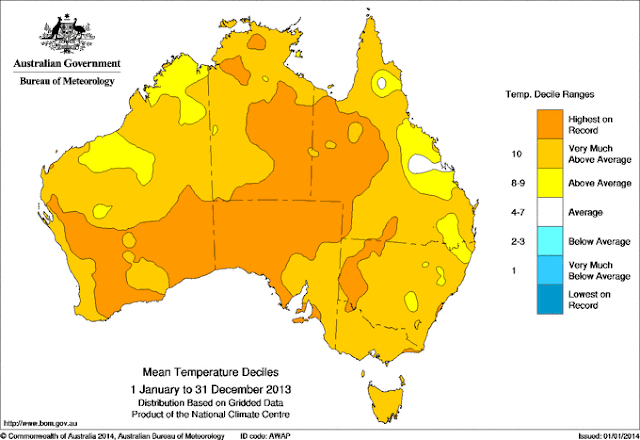 Modelling simulations show that these abnormal temperatures could not have occurred without the influence of anthropogenic greenhouse gases.

Professor David Karoly is a climate scientist from the School of Earth Sciences, University of Melbourne made the following statement through the Australian Science media Centre:

“The new record high calendar year temperature averaged across Australia is remarkable because it occurred NOT in an El Niño year, but a normal year. Analysis has been made of this temperature record using simulations with nine different climate models that represent well the natural variability of Australian average temperatures. These indicate that greenhouse climate change vastly increased the odds of setting a new temperature record. In the model experiments, it is NOT possible to reach such a temperature record due to natural climate variations alone. In simulations with no increases in greenhouse gases, NONE of the more than 13,000 model years analysed reach the record temperature observed in 2013. Conversely, in simulations for the period of 2006 to 2020 with natural variability and human influences, including increases in greenhouse gases, such records occur approximately once in every ten years. 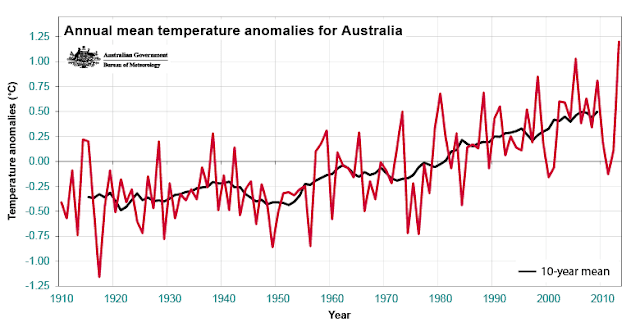 The year was marked by extreme heatwave activity with many temperature records broken throughout the year. We had a real scorcher in January which precipitated extreme bushfires in Tasmania. A multitude of temperature records tumbled as Prime Minister Julia Gillard linked the Tasmanian fires to climate change. The January heatwave was clearly part of a global warming trend said IPCC head Pachauri. You can read more on The human role in Australia's ‘angry’ hot summer by climate scientists Sophie Lewis and David Karoly. 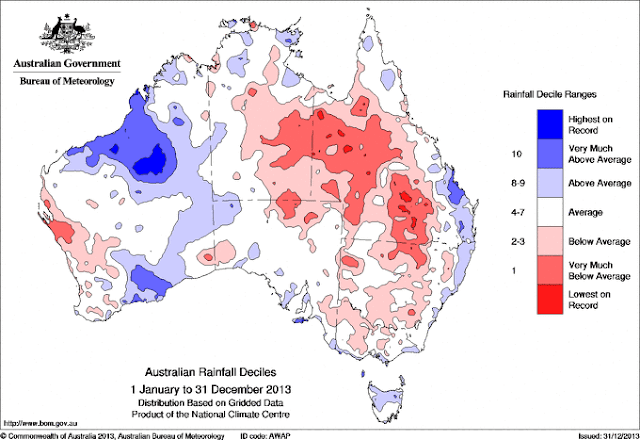 But it wasn't all heat, Queensland had torrential rain and tornados from ex-cyclone Oswald causing record flooding in some areas. But the media is still slow to connect the dots between the Queensland 2013 bigwet floods, tornados and climate change. Drought also made a return to Western Queensland, parts of the Northern Territory and North western NSW.

Heatwaves, when defined as exceptional prolonged heat relative to average temperatures, also can occurr during winter which can affect winter chill for orchard crops. Australia had it's third warmest winter on record.

Spring was also exceptionally warm with the Hottest September and hottest 12 months on record for Australia. Australia had an exceptionally early start to the Bushfire season with record temperatures in September, shortly after the election of a conservative Government lead by Prime Minister Tony Abbott whose first actions were to close the Climate Commission and trash carbon pricing infrastructure of the Gillard and Rudd Labor governments. 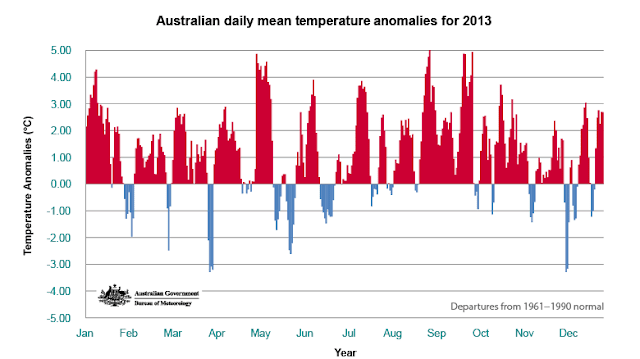 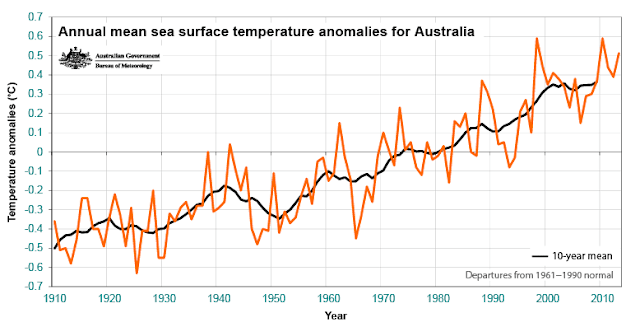 Professor Roger Jones, a Professorial Research Fellow at the Centre for Strategic Economic Studies at Victoria University and a Convening Lead Author (CLA) on the Intergovernmental Panel on Climate Change's Working Group II Fifth Assessment Report to be released later this year drew attention in particular to the incidenxce of heatwaves.

“The Bureau of Meteorology’s annual climate statement contains a number of observations that should be of concern to all Australians. While the increases in average temperatures may seem to be benign – heat waves are increasing faster than those averages. Why heat waves are longer and hotter than anticipated is not yet clear, but they are contributing to greater fire danger and heat stress than projected by climate impact studies, affecting animals, plants and humans.

Dr Sarah Perkins has extensively researched Australia's temperature record and heatwaves. She has developed the Scorcher website to identify the location of heatwaves from historical temperature data. She is a Research Associate in the ARC Centre of Excellence for Climate System Science at the University of New South Wales. Her statement to the Australian Science media Centre outlines just how extraordinary the past year has been for temperature and heatwaves across Australia: 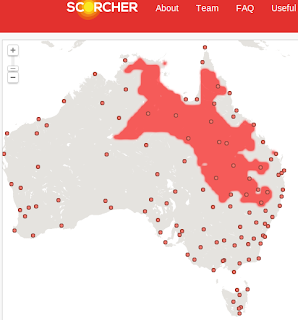 “Australia seeing its hottest year on record for 2013 comes as no great surprise, given all the records that have been broken throughout the year. The year started off with a record-breaking summer, which saw a massive heatwave take up the interior of the continent, the hottest month on record, and 7 days in a row where the national average exceeded 39 degrees Celsius. We saw an early end to winter, the hottest consecutive 12 months on record, the hottest spring on record, and the largest anomaly from the monthly mean temperature - September 2013 was 2.75 degrees celsius above the overall September mean, the highest anomaly for any month on record. All these records have been broken while we've been in "neutral" phases of the El Nino-Southern Oscillation phenomenon, when we expect average conditions. We usually expect to see hotter temperatures during an El Nino phase.

We have already seen the impacts of such record breaking events, such as the earliest start to the bushfire season. The Blue Mountains saw their worst fire conditions since 1968. The early end to winter and extreme spring temperatures contributed to increased risk of fire weather by drying out the fuel load. And at the moment, inland areas of Australia are experiencing scorching heatwave conditions, which have adverse impacts on human life.

While records are occasionally broken here and there, the amount of temperature records broken in the last year is extraordinary. Studies have already shown that the risk of summers like 2013 occurring have increased by up to five-fold, because of human induced climate change. This can be likened to the increased risk of cancer if one smokes - like medical science has proven that tobacco smoke greatly increases the risk of contracting cancer, climate science has proven that higher atmospheric greenhouse gas concentrations increases the risk of more extreme temperatures, more often.”

So all this extra heat, and it could be even hotter with the next El Nino. An El Nino year can add as much as 0.5 degrees to average temperatures during summer in Australia, and 0.2-0.3 degrees overall for global temperatures. Two recent reports highlight that climate change may be causing more extreme El Niño and La Nina events. A stronger El Niño is likely to bring more intense drying which may exacerbate drought and bushfire weather.

But as global warming continues and we pass climate departure, Karl Braganza, manager of climate monitoring at the Bureau of Meteorology warns how we see the temperature of 2013: "By about 2030, it becomes about an average year, by 2080, it's actually a cold year." 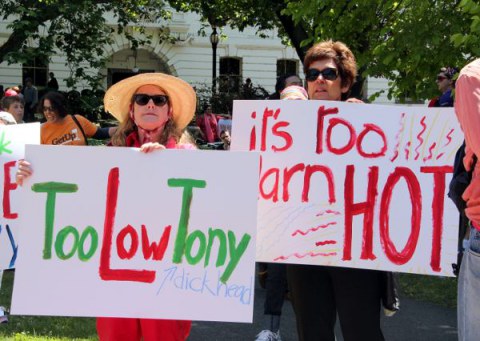