Australian Heatwave temperatures climb towards 50C at start of 2014

With substantial heat in the continental centre, the first days of 2014 saw temperatures climb towards 50C in western Queensland, western NSW, South Australia and parts of Western Australia and the Northern Territory.

See this video report from the Guardian (3 January 2013) of bushfires on North Stradbroke Island in south east Queensland, and temperatures hitting 54C at Oodnadatta in South Australia.

On Saturday temperatures in Brisbane peaked at 41 degrees Celsius. Bureau of Meteorology forecaster Pradeep Singh said that Cooler sea breezes worked against the hot westerlies blowing in the from the interior keeping temperatures down below the January record of 43.2C.

But according to some personal temperature gauges it was scorching:

It was 50.5 degrees yesterday in parts of Brisbane. (That's 122.9 degrees for my non-metric friends.) pic.twitter.com/G5ULoqnX2U #heatwave

On Saturday several western Queensland towns pushed well beyond the 40C mark. St George topped the temperature list with 47.2C, while Winton and Longreach also had scorchers at 46.4C and 46.3C respectively. Charleville followed on 46.1C, while Blackall, Roma and Thargomindah all recorded temperatures just above 45C. Maroochydore near the coast reached 41.3C - eclipsing the previous 38.7C record.

Bureau of Meteorology senior forecaster Bryan Rolstone said the heatwave was one of the longest Queenslanders have endured. "This may have been the longest one for a long time, over the interior anyway," he told the Courier Mail. He said that the heatwave was caused by a build up of hot air in the state's far north.

The temperature reached 49.3C at Moomba in the South Australia's far-north-east on Thursday. In New South Wales, Walgett recorded 49.1C on Friday, which is the highest temperature recorded in NSW since 1939, according to the Bureau of Meteorology, reported Weatherzone. 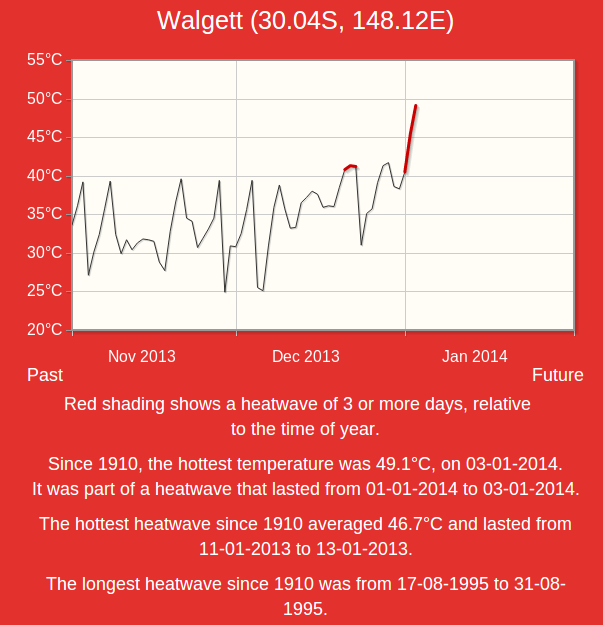 Ben McBurney reported on weatherzone that Records tumble in blistering heatwave. Here is an excerpt:

Tarcoola in South Australia was one of the first places to endure the intense heat, reaching 48.9 degrees on Wednesday, its hottest day on record. Coober Pedy hit a sizzling 47.4 degrees, its hottest January day on record, and for any month since December 1972.

By Thursday, the heat was turned up a notch as Moomba in the northeast of SA hit an unbearable 49.3 degrees, just 0.3 degrees short of its record. Alice Springs also fell just short of its all-time record climbing to 44.9 degrees, its fourth hottest on record.

Records did fall elsewhere though on Thursday. Camooweal in Queensland hit 46.0 degrees, its hottest January day on record, while Tibooburra in New South Wales saw its hottest day in more than 100 years of records reaching 48.4 degrees.

Friday was really the day for history books though, as records tumbled over NSW, QLD and the Northern Territory.

In NSW, Walgett saw its hottest temperature in at least 110 years as it hit a scorching 49.1 degrees, while Moree and Narrabri obliterated their previous all-time records by around three degrees, reaching 47.3 and 47.8 degrees respectively. Inverell hit 41.1 degrees, and Tamworth 45.1 degrees, also all-time records.

In QLD, St George and Roma both saw their hottest day on record reaching 47.2 degrees and 45.8 degrees respectively, while Tennant Creek in the NT also saw an all-time record hitting 45.6 degrees.

In the Northern Territory the hottest January day ever in Tennant Creek peaked at 45.4 degrees. It breaks the previous record set last year of 44.2 degrees. Alice Springs has recorded 13 consecutive days over 40 degrees celsius. 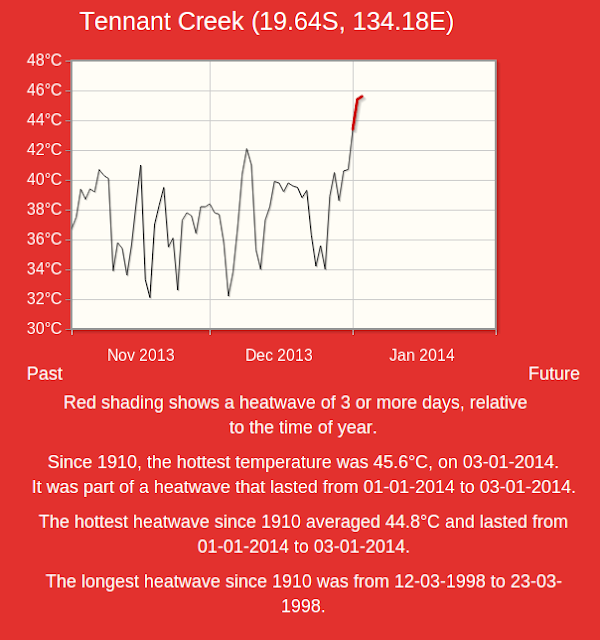 The heat is set to continue in Western Australia in the coming week.

Oh: while Aust smashes heat records, Canada has coldest days ever. Srsly, climate deniers, how the fuck do you do it? http://t.co/o5EtWKulU7 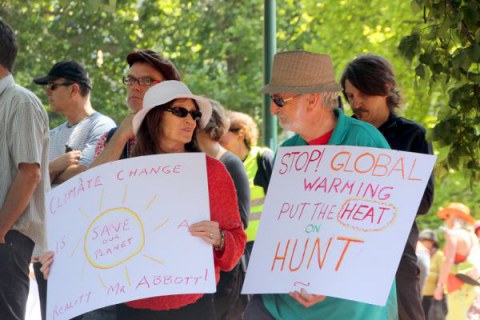 Australia can make very good use of renewable solar energy