Effigy Maker returns to Ballarat for the Eureka Rebellion Commemorations

Itinerant peace activist and effigy maker, Graeme Dunstan, has returned to the Ballarat district to prepare for the celebration of the 159th anniversary of the Eureka Rebellion.

Mr Dunstan, who travels the east coast of Australia organising and supporting protest events, has been supporting the Eureka anniversary commemorations in Ballarat with his distinctive flags and lanterns for the past 15 years.

"Eureka is a core story for understanding the history of social change in Australia from the bottom up," he says. "I am proud to be supporting the Reclaim the Radical Spirit of the Eureka Rebellion celebrations which are convened by Dr Joe Toscano of the Anarchist Media Institute. (Downloadable media release here.)

Mr Dunstan expects that about 150 will gather at 4 am Tuesday 3 December for the Eureka Dawn Service at the Eureka Stockade Memorial, cnr Stawell and Eureka Streets, Ballarat.

"In a time of widespread dissatisfaction with Parliamentary politics and a myriad community based protest groups which are out to save ground water from CSG miners, forests from coal pits, the Reef from coal ports, food from Monsanto GM crops, whistle blowers from Grand Juries, West Papuans from Indonesian oppression, Australians from more US wars and so on, the Eureka rebellion story takes on a special resonance and the Eureka Dawn Service, a special solemnity for activists," he said.

In recent years Mr Dunstan has made an artful addition to the Eureka Dawn service: the dawn burning of a cardboard effigy of what he describes as "this season's most prominent oppressor of rights and liberties."

Last year it was an effigy of Major General Michael Krause who Mr Dunstan describes as the door opener for the US Marines occupation of Darwin.

Although only a week out from the event, Mr Dunstan has yet to decide who his effigy will depict at next Eureka dawn.

"I am still taking nominations," he said. "So many to choose from." 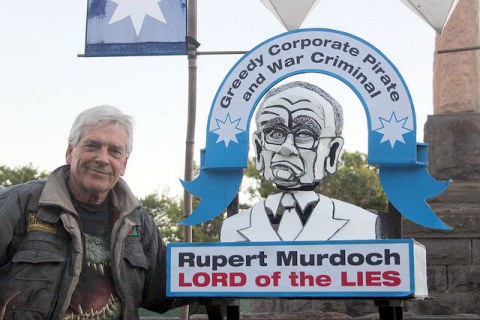