Related COP19 Stories: India: whatever happened to fair play? It's just not cricket | Yeb Saño, The Rise of a Celebrity Climate Negotiator from the Philippines | Time for a climate change. Dreams or Numbers for Gender Equity | Australia wins unprecedented fourth Fossil of the Day award for finance stance | Tens of Thousands Rally for Climate Action | Australia not budging on climate position at home or in Warsaw | Climate Action Moreland: ALP opposes climate tax repeal

It followed a collection of titles for Fossil of the Day during this year's climate talks in Poland. CAN described jokingly that this was Australia's "first major international award", citing the government's national legislation to repeal the carbon price as a deciding factor for judges. CAN also described their failure to heed advice from other parties to increase their emissions reduction target. Australia's participation in loss & damage negotiations was described as more hinderance than help, while their decision not to send a minister was met with international criticism.

Canada has been given a special Lifetime Unachievement Fossil Award for its destabilising role in the negotiations. "As long as Canada and the Harper Government puts their addiction to the tar sands first, Canada will continue to be a Fossil champion," CAN declared.

Singapore won Fossil of the Day for its opposition to key elements of a roadmap to 2015, while the US came in at second place for failing to agree on the relationship between COP and the Green Climate Fund.

In happier news, Ray of the Day went to Chile. AILAC was commended for its "gold standard in civil society engagement, moral integrity and simple logic by championing youth in the ADP and putting forward Intergenerational Equity" 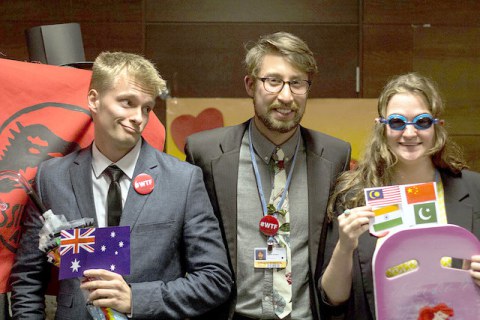