Time for a climate change: Dreams Or Numbers For Gender Equality?

By Cécile Schneider, photo by UNFCCC.

Tuesday’s UNFCCC ‘gender and climate change’ day was unconventional in many ways. In hosting the feature event, Christiana Figueres, executive secretary of the UNFCCC, did not ask panellists to talk about their countries’ achievements, their experiences of gender inequality or even their proposals.

Instead, Mary Robinson, former President of Ireland; Helen Clarke, former Prime Minister of New Zealand; and Lakshmi Puri, deputy executive director of UN Women, among others, were reminded to “keep their feet on the ground and their eyes to the stars”. All were asked to share their dream of the world they want for women in the future. A song about the “world of change” was also sung before and after the question session.

This change was refreshing after days of classic conference presentations, with power point presentations, proud politicians and strict script reading. But what does the originality of this event imply for gender as a topic at the climate negotiations?

The seriousness of the issue came across when panellists mentioned that women are going to suffer disproportionately to men. It became clear that in spite of the “Doha Miracle”, the path to gender equality remains tedious. Exchanging our dreams and listening to a song may not ease that feeling.

Do women not deserve a serious and realistic discussion about their inclusion in this decision-making process? The UNFCCC negotiations are not a musical, and we would never sing a song about climate finance or the post-2015 agreement. What’s different with gender?

Amongst 72 countries evaluated in this pilot project Iceland ranked first, and the Democratic Republic of Congo performed worst. Criterions included the number of female managers and senior officials, women with bank accounts, protection of property rights, gender-based rights and participation, and even women in COP delegations. This index is more likely to help countries improve their gender equality performance in certain defined areas, as opposed to knowing Mary Robinson’s dreams of transformational leadership or Helen Clarke’s dreams of women’s inclusion and participation.

In a side-event about climate smart finance in the same room, at the same time the following day, only men sat in the chairs.

By Cécile Schneider, photo by UNFCCC. 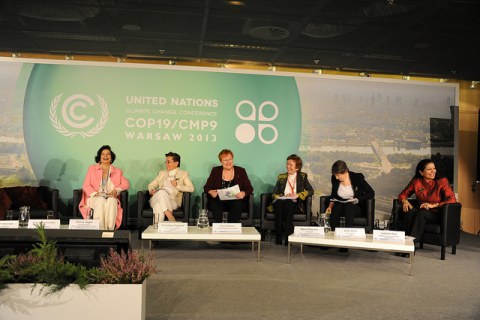