Just a few days after the Federal election NSW experienced a surprisingly early start to the bushfire season with fires on Sydney's outskirts giving us a taste of things to come. Queensland is also facing severe fire danger with the early onset of high temperatures.

The Australian Bureau of Meteorology also issued a special climate statement saying that the last 12 months is Australia’s hottest 12 month period on record, and it's second warmest winter on record for maximum temperatures.

The Bushfire CRC has already advised we are facing above normal potential for the 2013-2014 fire season in much of southern and western Australia:

"due to abundant grass growth across inland Australia, due to above average rainfall since May 2013. These conditions, coupled with above average temperatures across the country since January 2013, have resulted in a build up of fuel in grasslands. These higher temperatures have also seen forests begin to dry out."

Study: fire weather rose dramatically 16 of 38 sites from 1973 to 2010. Experts cite #climate change as cause of shift in #bushfire seasons.

The early start to the bushfire season was followed on September 13 by a Special Climate Statement (PDF) from the Australian Bureau of Meteorology (BOM).

"The last week of August 2013 and the first half of September have seen record high temperatures for this time of year, affecting large parts of Australia (Figure 1 and 2). On the last day of winter, Australia recorded an average maximum temperature of 29.92̊C. A new daily record was also set for winter exceeding the previous record high by 0.19 ̊C (29.73C set on 23 August 1995). This was followed by an early arrival of very warm conditions with 31.45 ºC recorded on 1 September for Australia - averaged maxim a, setting a new record for the earliest 31 ºC day by 15 days (previously 31.68 ºC recorded on 16 September 1981)." 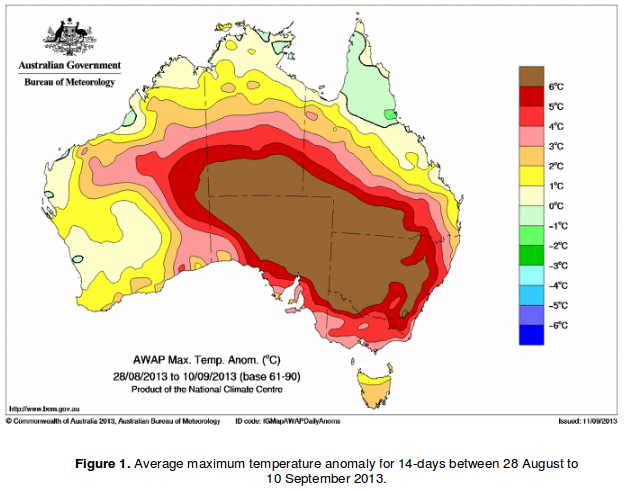 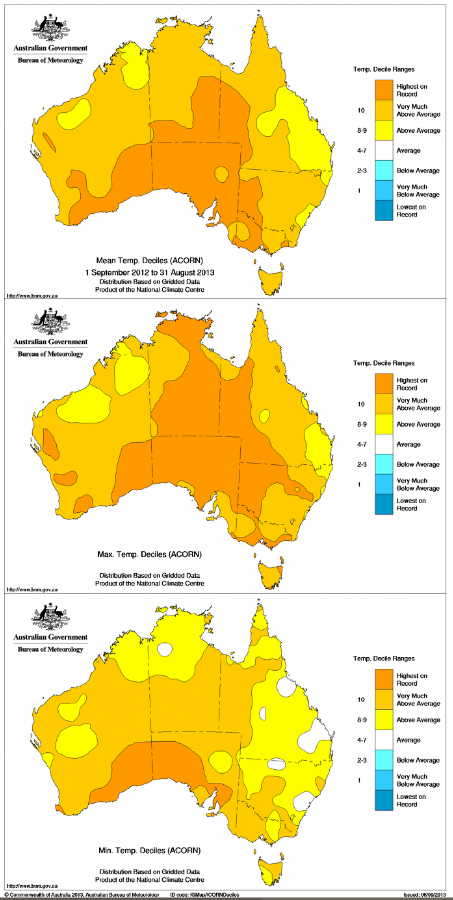 Last January we experienced an angry summer with intense heatwave conditions exacerbating bushfires and causing heat stress. Human caused Climate change is clearly implicated. We tend to think of cyclones, fires and floods for their destructive capacity and greatest threat to life, but the statistics show that Extreme heat and heat stress trumps all extreme weather events in Australia for it's mortality impact.

While Australia's new Federal Government are intent on dismantling carbon pricing and clean energy schemes instituted by the previous minority Labor Government, both the Global and Australian climate are already changing for the worse which will inflict greater social costs and damages.