On September 7 Australia elected the Liberal National parties - the Coalition - to Federal Government, with Tony Abbott as our new Prime Minister. It is a Government firmly in climate denial, intent on winding back carbon pricing; undermining renewables; and closing down the Climate Commission setup to communicate and engage the public on climate science and its impacts.

Going into the election campaign there was bipartisan commitment by both the Labor and Liberal Parties to meeting a minimum commitment of 5 per cent reduction in Australia's emissions by 2020. But the Liberal Party party strategy for meeting this commitment, the Climate Direct Action Plan, was widely criticised as being reliant on soil carbon methodologies largely unproven and unable to achieve its target within its $3.2 billion budget.

On the Monday after the election there was an early start to the bushfire season with large fires in Western Sydney and bushfire alerts for much of Queensland. The Bureau of Meteorology also issued a special climate statement saying the last 12 months has been the hottest 12 month period on record with the winter period being the 2nd warmest on record.

Five days before the election Tony Abbott stated that they wouldn't even commit to keeping this small target, just to the limit of the $3.2 billion they had budgeted in their climate policy. This is despite the Coalition repeatedly affirming it's commitment to emission reduction targets range of 5 to 25 per cent by 2020, according to the Climate Institute.

Climate scientists say developed countries like Australia need emissions reduction of 25% to 40% by 2020 as our equitable share for a reasonable chance to limit global warming to 2 degrees Celsius. Both major political parties have refused to lift the necessary ambition to reach targets in accord with what climate scientists say we need to do.

"The bottom line is we will spend as much as we have budgeted, no more and no less,” Mr Abbott said. "We will get as much environmental improvement, as much emissions reduction as we can for the spending that we've budgeted." he said on September 2, five days before the election, at the National Press Club, according to the Sydney Morning Herald report.

In his address Tony Abbott mentioned the 'Carbon tax' 37 times but did not mention the process of climate change or its impacts even once, which highlights his main priority.

National exit polling (Results PDF) done on behalf of the Climate Institute showed that voters primary concern was for the economy and jobs (31 per cent) with Climate Change (5 per cent) and carbon tax (3 per cent) significantly lower. Even among Coalition voters only 3 per cent listed the carbon tax as a top issue.

“After a campaign which saw a return to 2012’s focus on the costs of carbon pricing, surprisingly from the ALP as well, there was no majority support for repeal with voters split 47 per cent for repeal and 47 per cent for maintaining some form of carbon pricing when asked to choose between the two,” said John Connor from the Climate Institute. "A bigger challenge looms for the Coalition regarding the effectiveness of their climate policies.”

"Despite commentary to the contrary, the Coalition maintained support for its 2020 pollution reduction target range of 5 to 25 per cent and have supported this commitment being made to other nations." Connor said in a media statement.

It was stressed by John Connor that the Coalition needs to effectively show how their policies can achieve the agreed targets before attempting to repeal the current policies presently in place.

“Climate change is complex and the solutions aren’t easy but the Coalition rushes into repeal of the carbon laws at their peril because climate change and its impacts aren’t washed away by this election result,” concluded Connor.

"I accuse this newly elected Government of wilful blindness, a policy of wilful blindness. They not only don't want the public to be informed on climate change, they themselves are not properly informed and that is willful blindness. In my country you can be thrown in to jail for wilfull blindness. And this is criminal negligence, another chargeable offence. There should be a category of intergenerational crime. I think what is going on in the industrialised world is criminal, because we are leaving a worsening situation for future generations who have no say in what we are doing at all."

The new ministry was sworn in this week, some eleven days after the election. There were substantial changes with the abolition of the Department of Climate Change being notable but expected by many. There was strong criticism generally, and including within the Liberal Party, about the inclusion of only one woman in cabinet, making this Government a real boys club. The absence of Aged Care and Disability portfolios also surprised many. The abolition of the Science Ministry was a shock, including to Labor Senator Kim Carr:

Except 4 6wks in WWII last time there was no Ministry for Science or Research was 1929. & I thought we were heading back to the 50s! #auspol

One of the first policy actions of the newly sworn in Tony Abbott Government was the announced closure of the Climate Commission, which was setup in February 2011 to advise the public on climate science and climate change impacts.

It had a budget of $5.6 million over four years as an independent, politically neutral body with a focus on educating the public on climate change science, the impacts of climate change, and mitigation and adaptation strategies.

"We've stayed out of the politics and stuck to the facts. As a result we've developed a reputation as a reliable apolitical source of facts on all aspects of climate change. I believe that Australians have a right to know - a right to authoritative, independent and accurate information on climate change. We've just seen one of the earliest ever starts to the bushfire season in Sydney following the hottest twelve months on record." he said.

The Abbott Government have also commenced work to start dismantling the carbon pricing and clean energy infrastructure negotiated by the Independents, Greens and Labor in the last Parliament. The Climate Change Authority and Clean Energy Finance Corporation were both established by Acts of parliament. Unlike the Climate Commission they cannot be wound up through executive authority, they require repeal or amendment of their governing legislation.

The Institute of Chartered Accountants Australia in their paper - The first 100 days: priorities for a stronger economy (media release) - published on 12 September, recommended the new Government concentrate on economic issues. They argue strongly that reversing the carbon pricing mechanism is a backwards step:

"Australia will be taking a step backwards if the carbon price is repealed. Driving businesses to become more carbon efficient is critical for our future. Similarly, if the Clean Energy Finance Corporation (CEFC) is disbanded there will be a gap in our ability to encourage investment in clean energy technology."

"The government must also provide a clear and unambiguous commitment to reaching the 2020 emissions target to reduce carbon emissions by five per cent on 2000 levels – without a caveat on costs. Businesses need this certainty so they can invest in low carbon business practices in the knowledge that they are taking steps in the right direction."

The Clean Energy Finance Corporation was established with full administrative and financial independence, while including accountable and transparent processes for ministerial oversight and guidance of its actions, use of funds and investment policy. The CEFC is actually returning a profit for each tonne of carbon it's investments help to reduce.

Why scrap a program that is going to deliver a $2.40 profit for the government for every tonne of pollution it cuts? #CEFC #ideologygonemad

For example, the CEFC has issued very recently a $70 million loan to Pacific Hydro to complete the final stage of the Portland wind farm as part of a finance package along with commercial banks. This investment will generate about 400 jobs in construction in a regional area and help reduce emissions from Victoria's brown coal.

The Australian Conservation Foundation through the Environment Defenders Office (victoria) sought legal advice (PDF) from Senior Counsel Stephen Keim who identified that the Federal Government does not have the legal power to stop the activities of the Clean Energy Finance Corporation without repealing the CEFC Act.

“A direction to cease activities or cease investments, or to cease payments, would frustrate the legislative purpose of the CEFC Act, would be inconsistent with the CEFC Act and would not be authorised by s 64(1) of the CEFC Act." advised Stephen Keim SC.

Australian Conservation Foundation climate change program manager Tony Mohr said it was the clear responsibility of the Clean Energy Finance Corporation to continue investing in clean energy solutions as per its legal charter unless or until the Act of Parliament is amended.

“We call on the Federal Government to respect the law and not attempt to stop the CEFC from continuing its good work. The CEFC is helping emerging technologies such as solar thermal, geothermal and wave power graduate from universities and research centres into a clean, national electricity market,” Mr Mohr said in a media statement.

Christine Milne also released a statement critical against the Abbott Government early moves, "In one swoop, he has demonstrated his contempt for climate science and for the health and wellbeing of future generations. Prime Minister Abbott has distinguished himself as one of the only leaders of a western democracy to deny the severity of global warming and to actively undermine infrastructure which is bringing down emissions. Future generations will look back on this day and remember it as the day Tony Abbott condemned them and their peers to climate chaos."

She also highlighted that the 5% emission reduction target is woefully inadequate.

"Shutting down the Climate Change Authority, ahead of its first report on fair and science based emission reduction targets for Australia, is cowardly and an attack on current and future generations." said Senator Milne, "Tony Abbott is a climate criminal. Shooting the messenger does not alter the fact that Australia has to do a lot better than 5% in order to contribute fairly to the global challenge of constraining global warming to two degrees."

Greens Leader Christine Milne responded to one of my tweets:

@senatormilne @GreensBen and that point is crucial. We are still stuck on the efficacy of 5% reduction when we need to be aiming 25-40%

One Labor politician, Nick Champion from South Australia, has floated the idea that Labor should allow the Abbott Government's legislative changes to carbon pricing to pass to expose them as a fraud. But this has been firmly argued against in a blogpost by influential Labor backbencher Kelvin Thomson.

The onus of keeping carbon pricing as part of a strong strategy of climate mitigation will fall to Labor and Greens Senators to block any substantive changes up to June 2014.

With new crossbench Senators taking their seats from July 2014, they will need to fully assess closely whether Government climate action proposals can meet the targets required, and particularly targets Australia has already committed to internationally. The composition of the new Senate from July 2014 may make negotiation of legislative changes complex and difficult. 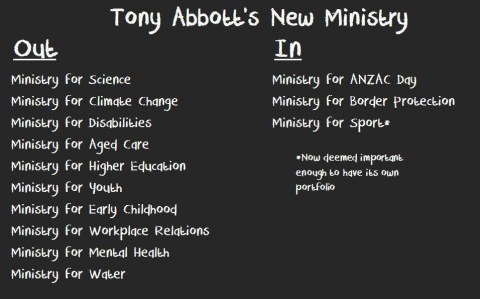