Opposition Leader Tony Abbott made a frosty mistake in visiting the Adelaide Ice Service factory today, arguing the business was a victim of the carbon tax. At the same time Climate Change Minister Greg Combet and local Labor MP Mark Butler announced a grant of nearly $90,000 to the company from the carbon price funded Clean Technology Food and Foundries Program to install a 87.5 kilowatt photovoltaic solar system at its ice manufacturing plant in Regency Park.

The visit continues Abbott's attempt to beat up the carbon price as a negative, but it shows just how shallow and loose with the truth his own campaign is, especially regarding climate change policy. The carbon price hasn't brought economic ruin. Indeed, there are strong arguments by Environment Victoria that the compensation package to carbon intense energy providers is overly generous. Victoria's brown coal generators are being subsidised to continue polluting to maintain healthy profits.

Tony Abbott spoke to reporters at the Adelaide Ice Service factory and posed for photos. He said (and I quote in full):

"Making ice is very simple, as everyone knows. What it requires is power and refrigeration and the cost of power is going up and up and up thanks to the carbon tax and the cost of refrigeration is going up and up and up, not just because the price of power is going up but because the cost of refrigerant gases has quadrupled under the carbon tax. So, this is one of so many thousands and thousands and thousands of Australian businesses which is being badly damaged by this toxic tax which the Prime Minister told us she would never introduce, and then she did. This was a Prime Minister who said one thing to win votes and did the opposite to hold office and that's why people just don't trust this government; why people just don't trust this Prime Minister."

Not a word about the impact of climate change and extreme weather, like the record-breaking Angry Summer heatwave, catastrophic bushfires or the recent Queensland floods and tornados, and the need to reduce carbon emissions.

At the same time as Tony Abbott was making his boo-boo of falsely accusing the company of suffering under the carbon tax, Greg Combet and Mark Butler announced the grant for installation of a major rooftop solar PV system which will reduce the companies energy costs by an estimated $20,000 per year, as well as saving substantial carbon emissions.

"Adelaide Ice Services provides an important service to many local businesses and through this simple project the company is helping the environment and reducing its own costs," said Mark Butler, the local Labor MP for Adelaide.

Support to businesses from the Clean Technology Investment Programs like Adelaide Ice Service complements the Government's $1 billion Plan for Australian Jobs in the manufacturing sector according to Minister Combet:

"Labor is the only party supporting manufacturing in Australia. We have worked hand-in-hand with the industry and workers to implement a package designed to address the substantial pressures the sector is under,"

"This support is under threat from Tony Abbott. He will tear down the $1 billion grant program that is helping manufacturers like Adelaide Ice Services, he will cut up to $2 billion of crucial support for the automotive sector and he is saying no to the $1 billion Aussie Jobs package."

"The only plan Mr Abbott has is fear. He continues to try and scare workers and their families while planning to cut industry support and offering nothing but empty promises. The greatest threat to manufacturing in Australia is an Abbott led Government."

All the grants in the Clean Technology Investment Programs are selected by an independent committee, with the Minister having no role in the selection process. The grant had been finalised at the start of April 2013, and approved early this week, according to a spokesperson from the Minister's office as reported by News Ltd.

Now Julia Gillard went to the 2010 election promising no carbon tax. But we elected a minority Government which entailed significant negotiation with the Independent members and Greens. All promises were on the table for negotiation.

A consultative forum on climate policy was established soon after the election in which all parties and independent members were invited to contribute. The Liberal National Parties chose not to be represented or contribute to this process. The fixed carbon price morphing into an ETS scheme, along with the Clean Energy Fund and other initiatives was the result of this process.

The legislation was skilfully negotiated through parliament by a minority Government, largely due to Julia Gillard and her Climate Minister, Greg Combet. Rather than accuse Julia Gillard of breaking a promise, we should respect her for being willing to back down on her own position and negotiate a difficult but important piece of policy legislation through a difficult parliament. This is not something Tony Abbott is ever likely to do. Just view his inability to acknowledge he is wrong in the Leigh Sales interview in August 2012 (see bottom of story).

Tony Abbott is also wrong on electricity prices going up due to the carbon price. Most of the price rises in electricity are due to power distribution companies investing in upgrading network transmission equipment for the electricity network.

But South Australia is a little different. The widespread installation of rooftop Solar PV systems has dampened demand through peak use times during the day.Even though solar only accounts for 2.4 per cent of overall demand, during the summer peak total demand was well down on what was expected given the "Angry Summer" extreme heatwave conditions experienced. In the last month or so Australia has passed the mark of over 1 million rooftop solar panel systems installed.

According to Greg Combet, when Labor came to power in 2007 solar was a niche industry. Only 7,472 small-scale solar systems had been supported by the Howard Government's Mandatory Renewable Energy Target and there were only 339 accredited installers across the country. Over 2,000 systems were being installed each week during 2013, compared to 45 a week in 2007. The number of accredited installers has grown to around 4,800 and employment in the solar industry has grown more than eight-fold.

So do you really believe Tony Abbott on carbon tax and climate change? In 2009 Tony Abbott denied climate change and put forward an argument for a 'simple carbon tax' in opposition to the Government's then CPRS scheme. Former Liberal Party leader Malcolm Turnbull declared in 2009 that Tony Abbott's direct action climate policy was bullshit.

Or perhaps you would like to watch Tony Abbott squirm under the questioning of 7.30 Report presenter Leigh Sales in August 2012 regarding Tony Abbott's failure to take notice of BHP statement on deferral of Roxby Downs development. Tony Abbott said it was the carbon tax and the mining tax, in conflict with BHP CEO Marius Kloppers statement, saying it was related to capital costs and the present investment environment. Abbott can't even acknowledge when he is wrong!

Julia Gillard announced the Federal election would be held on 14 September 2013. Do you really want this guy to be Prime Minister, with his lack of credible policy on climate change and in other areas, and his looseness with the truth? 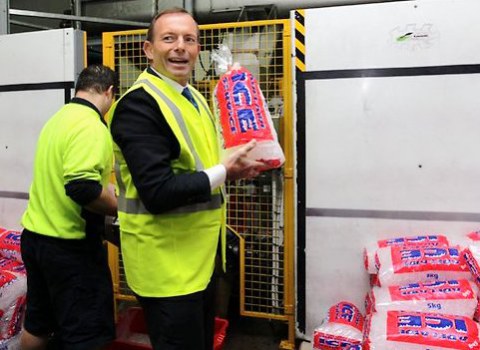