The IPCC chairperson is visiting Australia and commented that the Extreme heatwave and catastrophic bushfires that Australia is experiencing is an 'unmistakeable' part of a global trend of an increase in the frequency and intensity of heatwaves and other extreme weather events. Indeed, researchers from the Potsdam Institute for Climate Impact Research (PIK) have just released a new study - Global increase in record-breaking monthly-mean temperatures - which clearly shows the present Australian heatwave records being broken and the US recording it's hottest year in 2012, are both part of this global trend.

ABC reporter Fiona Blackwood interviewed IPCC chairman Rajendra Pachauri and asked , "In Australia we've had record temperatures, heatwaves, bushfires. Is this type of weather the sign of things to come?"

Pachauri replied: "I wouldn't say that any single set of incidents is connected with climate change, but if you look at the trend it is quite unmistakeable. We brought out in 2011 a special report on extreme events and disasters that clearly showed there is an increase in the frequency and intensity of heatwaves and extreme precipitation events. Of course with heatwaves you get droughts, other problems like forest fires. So, I think the trend is unmistakeable."

IPCC scientists are meeting in Hobart this week as part of the review process for the fifth major IPCC scientific report to be released later this year. This report is likely to indicate even more strongly that human emissions are causing climate change with an acceleration of impacts on the human and natural world, and that we need to peak emissions this decade then rapidly reduce them to maintain a safe climate. The window of opportunity to take effective action is closing fast according to Pachauri, based upon the many recent scientific and economic reports including from the Word Bank, IEA, and PriceWaterhouseCoopers.

Global surge in heat records a consequence of Global Warming

The latest study from the Postdam institute is a statistical analysis of global monthly average temperature records. It shows that on average, there are now five times as many record-breaking hot months worldwide than could be expected without long-term global warming.

"The last decade brought unprecedented heat waves; for instance in the US in 2012, in Russia in 2010, in Australia in 2009, and in Europe in 2003," lead-author Dim Coumou says. "Heat extremes are causing many deaths, major forest fires, and harvest losses - societies and ecosystems are not adapted to ever new record-breaking temperatures."

The statistical analysis of 131 years of monthly temperature data for over 12,000 grid points around the world reveals a surge in the number of records broken to be a consequence of the long-term global warming trend. The surge has been particularly strong over the last 40 years due to a stronger global warming trend over this period. Natural weather variability can also be seen in the trend. Heat records are particularly evident associated with El Niño events.

The trend into the future if global warming continues becomes more dire. Projections show that new monthly records will be 12 times as high in 30 years as it would be without climate change. "Now this doesn't mean there will be 12 times more hot summers in Europe than today - it actually is worse," study author Coumou points out

Study author Stefan Rahmstorf warns that "Statistics alone cannot tell us what the cause of any single heat wave is, but they show a large and systematic increase in the number of heat records due to global warming. Today, this increase is already so large that by far most monthly heat records are due to climate change. The science is clear that only a small fraction would have occurred naturally." 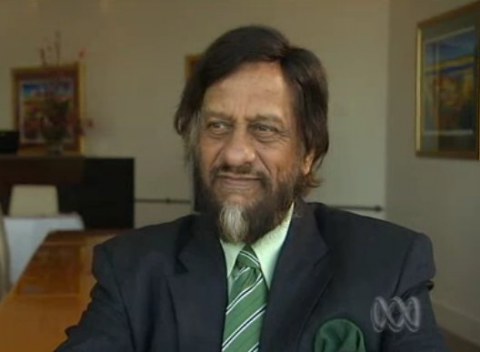 Prepare for coming disasters with a sustainable veggie garden

Mr. Pachauri has rightly concluded that extreme weather events are a phenomenon that are here to stay. Instead of declaring war against it, one should learn how to deal with it. A range of ecological disasters are on it's way, but as long as you prepare yourself you are fine. One of the best ways is sustainable gardening in an environment that can tolare the heat waves. I believe that going back to natural ways is the answer to confronting nature itself.