The Nyoongar Tent embassy was established in February 2012 in commemoration of the 40th anniversary of the Canberra Aboriginal Tent Embassy. We are an independent part of the national and international movement for the recognition of Tribal Sovereignty in Australia.

We are seeking your endorsement and support for an event we are planning on 25th January 2013 at Mata Garup (Heirrisson Island) in Perth. Our event will include children’s activities, a concert of local WA Indigenous talent, a preliminary launch of our commissioned report of media coverage of the Nyoongar Tent Embassy from February – March 2012 by the School of Education, Media and Cultural Arts at Curtin University and a Nyoongar Marmum Circle to support the main event being a ceremony to honour our Noongar Yorga Boodja.

For your considerations, we have attached our Vision Statement, a flyer and a draft program for the event. Under construction is our newsletter on our past, current and future work. It will be completed prior to the above event and all endorsements and support will be acknowledged if requested by your agency.

We would ask that your positive response to our request be provided to us no later than 14th January 2013.

TIME ACTIVITY FACILITATOR
7.00am ‐9.30am Set Up
NTE Volunteers

To unify all Tribal Sovereign people to pursue our inherent, universal and
indivisible right to self- determination for all present and future generations. 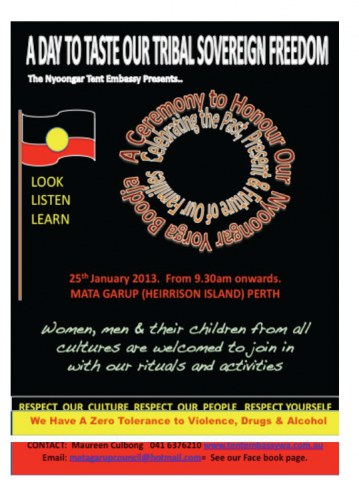 Help them out if you can

the texts above have been disseminated by marianne, our young warrior from perth, wa.

on friday 25 january they will be holding a cultural day in the remembrance and historical significance of the day before the british invasion in 1788, 225 years ago.

the organisers have properly and correctly recognised that the 25th was, indeed, the beginning of our last day of freedom as the traditional owners of the lands and the nations.

they are asking for your attendance where this is possible, along with endorsements and donations of cash or kind.

i am unable to attend but i will be there in the spirit of solidarity and brother/sister-hood and i offer my respects to the elders and activists involved on the day.

this association fully endorses this event and asks that those who can also endorse and support it in any way possible.

we live and work on the stolen lands of the gadigal people.

Thanx for your beautifully written email, and I agree with your views on the constitution, but being a WA yoorga I won’t say anything about the rest.

Happy new yr first of all to all you mob on the east coast and condolences too for the loss of great yoorga Aunty Izzy RIP...got signs to not go to the funeral and the next day after my plane flew out my son was sick for four days so I missed the funeral and all you guys.

Anyway Ray I have attached two documents to this email on behalf of our Matagarup Council for the Nyoongar Tent Embassy. We are organising a cultural day for our people at the nyoongar embassy on the 25th January called 'Our Last Day of Freedom' in reference to the day before invasion/survival day.

What I’m asking of you mob is if you can flick it to all your networks and any bodies you think of that may be able to support in some way, appreciate it brutha and catch yas at the national teleconference...