Dec 29, 2012: High sea surface temperatures (SST) of up to five degrees above normal are currently being experienced off the north-western Australian coast in a marine heatwave event. Like the extreme marine heatwave event in 2011 this will change marine ecosystems causing coral bleaching and fish mortality and impact on fisheries management and biodiversity.

A similar event occurred over several weeks during the 2010/2011 summer which impacted seafood stocks and marine ecosystems and was associated with an extremely strong La Niña event and a record strength Leeuwin Current down the Western Australian coast.

The marine heatwave has been linked to a higher prevalence of shark attacks on western Australian beaches.

On reports of the links between shark attacks and warmer waters Dr Rick Fletcher from the Fisheries Department of Western Australia said in an interview with the Australian Broadcasting Corporation:

"The changing water conditions can certainly impact upon the distribution of species like sharks. We know that sharks prefer cooler temperatures and that if there is cooler water they're more likely to be concentrated in a smaller area where the cooler water is located...."

Dr Rick Fletcher was interviewed by ABC Rural and described the impact of the previous marine heatwave:

"About two years ago we had an event where the Leeuwin current, which flows down the west coast of Western Australia, which brings hot water from the tropics, was flowing quite strongly. That was coinciding with some very hot air temperatures and very calm conditions, so that allowed the water temperature to increase substantially, At some spots it was over five degrees hotter than other areas at that time of year. That is the only time it has ever been recorded at that level." he said.

Read more or play the audio interview at ABC Rural: West Australian coastal waters in the grip of marine heatwave 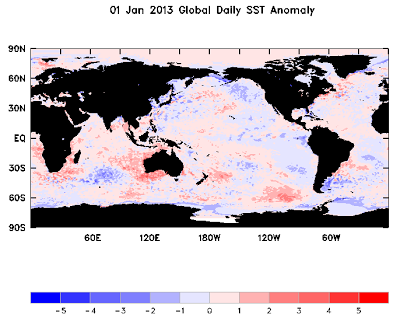 The last extreme marine heatwave event in 2011 caused a dramatic shift in fish and benthic communities, high rates of coral bleaching, fish, invertebrate and macroalgae mortalities, and algal blooms. For more than 10 weeks sea temperatures soared to unprecedented levels with warming anomalies of 2-4 °C along more than 2,000 km of coastline. 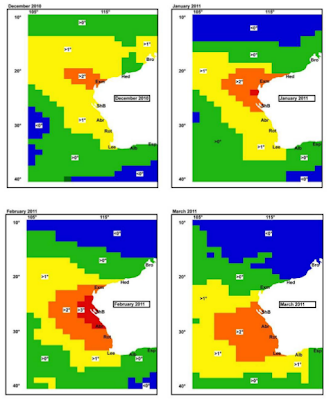 A number of scientific studies have been published on this earlier event. Thomas Wernberg et al - An extreme climatic event alters marine ecosystem structure in a global biodiversity hotspot (abstract was published Nature Climate Change and looked at the impact in Jurien Bay in particular. The study authors conclude in the abstract:

We show that biodiversity patterns of temperate seaweeds, sessile invertebrates and demersal fish were significantly different after the warming event, which led to a reduction in the abundance of habitat-forming seaweeds and a subsequent shift in community structure towards a depauperate state and a tropicalization of fish communities. We conclude that extreme climatic events are key drivers of biodiversity patterns and that the frequency and intensity of such episodes have major implications for predictive models of species distribution and ecosystem structure, which are largely based on gradual warming trends.

Another study by T. H. Rose et al and published in the Ocean Science journal - The 2011 marine heat wave off southwest Australia (abstract) - focused on the impact at Cockburn Sound. From the abstract:

We compared temperature and dissolved oxygen levels in 2011 with data from routine monitoring conducted from 2002-2010. A significant warming event, 2-4 °C in magnitude, persisted for >8 weeks, and seawater temperatures at 10 to 20 m depth were significantly higher than those recorded in the previous 9 yr. Dissolved oxygen levels were depressed at most monitoring sites, being ~2 mg l-1 lower than usual in early March 2011. Ecological responses to short-term extreme events are poorly understood, but evidence from elsewhere along the Western Australian coastline suggests that the heat wave was associated with high rates of coral bleaching, fish, invertebrate and macroalgae mortalities, and algal blooms. However, more ecological information from Cockburn Sound and other multiple-use embayments is urgently needed. The 2011 heat wave provided insights into conditions that may become more prevalent in Cockburn Sound, and elsewhere, if the intensity and frequency of short-term extreme events increases as predicted.

The Australian Marine Report card 2012 issued for the Leeuwin current, released in June, also details the damages and impacts of the 2011 Marine heatwave on fisheries and biodiversity. Coral bleaching was widespread from the Monte Bello Islands in the north to Rottnest Island with up to 80% of corals bleached at some sites according to several scientific studies.

The near-record strength of the Leeuwin Current in the austral summer of 2010/11 during one of the strongest La Niña events, was partly responsible for the unprecedented marine heat wave event off the WA coast (centred on the Gascoyne and mid-west regions) in February-March 2011.

The peak of the heat wave occurred during a two-week period in late February and early March 2011, with water temperature anomalies reaching 5°C along the central west coast, Abrolhos Islands and Shark Bay. This event caused massive fish and invertebrate kills (particularly Roei abalone in the Kalbarri region) as well as far-reaching (albeit temporary) range extensions of many tropical species down the west coast and eastwards towards the Great Australian Bight. The abalone fishery in this region has been shut and a research trial on the translocation of abalone from nearby unaffected areas into the depleted areas has been successful. This will be followed up by further translocations to assess the effects on the recovery of the stocks.

This event may also have longer-term implications for some marine stocks as the effects of the warm temperatures during their spawning and larval phases will be seen in the next couple of years. The recruitment of juvenile scallops and crabs in Shark Bay has been at record low levels towards the end of 2011 and this may have also been influenced by the warming event earlier in the year. There will be ongoing monitoring of the Shark Bay scallop and crab stocks and the management focus is on the recovery of their spawning stocks.

Similar extreme events may occur more often in the future with the rising trend of ocean temperature.

Such extreme marine heatwave events currently occurring on the Western Australian coast exacerbate the velocity of climate change for many marine species. While we feel the impact on the fisheries we manage, marine ecosystems have trouble coping with such rapid and extreme change. The result is a reduction in the marine diversity, although some tropical species are able to take advantage of the increased range.

Marine scientists have been warning for some years that our Oceans at high risk of unprecedented Marine extinction.

Takver is a citizen journalist from Melbourne Australia who has been writing on climate change, science and climate protests since 2004. This article was originally published at San Fransisco Bay Area Indymedia and on his blog. 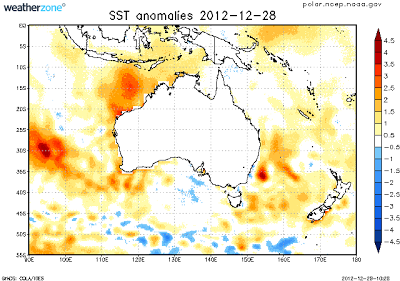