"The Australian people made heroes of none, and raised no idols, except perhaps Ned Kelly, an outlaw.. "
Brian Fitzpatrick

On December 6 police were called to a property in Oakville Sydney over a neighbourhood dispute about a bird aviary.
The police and media claim that 19 year old Mitch and 45 year old Fiona Barbiari barricaded themselves inside their home when officers arrived and that Mitch kept police at bay with a volley of arrows throughout a two hour siege. Shortly after the detective inspector Bryson Anderson breached the Barbieri’s back patio he was stabbed and would latter die of his wounds. Mitch and Fiona have both been charged with his murder.

What followed was a week of corporate media hagiographies, painting Bryson as a fallen hero and the NSW Police as brave protectors of the ‘community’ while savagely vilifying the accused. No cop is innocent of the brutality ingrained in routine police work, nor of the dehumanising torture of incarceration. As a high ranking officer with 26 years in the force Bryson has plenty of blood on his hands.

In the early morning of the 12th of December, we dropped three banners from the Hathem st bridge over Parramatta rd in Petersham. We chose this day to time with Bryson’s open funeral, which the police and media had encouraged the general public to attend. This small action was made to counter the corporate media whitewashing of police violence and murders, with claims that ‘the whole state is in mourning’. We wished to make clear our rejection of police protection and our solidarity with the accused.
The banners read:

FROM JOSEPH LUKER TO BRYSON ANDERSON NO TEARS FOR DEAD COPS!

Joseph Luker, a member of the Sydney foot police was the very first cop to be killed on this territory in 1803. From the very first police units established by the British invasion force, to the militarised NSW police force, cops have played a central role in the displacement and imprisonment of the aboriginal population, the regulation and control of convicts, the poor and immigrants for the benefit of ruling elites. The social peace that police uphold allows hunger while surplus food is discarded from supermarkets and homelessness while buildings sit empty for decades. This social peace is a lie, only maintained by a constant war against the marginalised and under privileged. The daily violence cops meet out to us using their batons, fists, boots, OC spray, tazers, handcuffs and glocks is no accident. They have chosen their side in this war, and so have we. We are against any peace under capitalism and encourage looting, squatting and confrontations with police to reclaim communal territory from capital.

UNTIL THERE ARE NO POLICE PATROLLING OUR STREETS, ARRESTING OUR LOVED ONES AND HASSLING US AT EVERY TURN, THE POLICE WILL BE ATTACKED

ALL OUR HEROES KILLED COPS 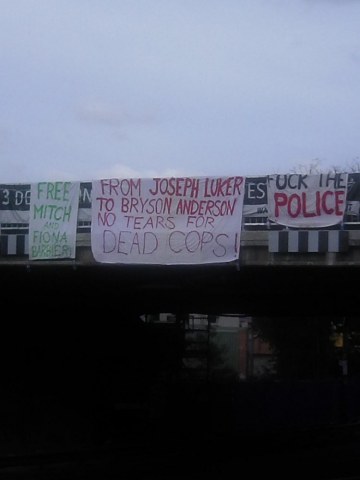 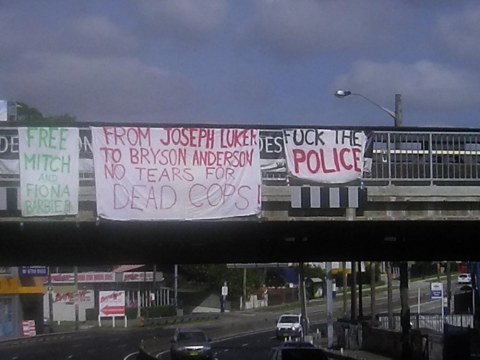