Did you hear that Tony Abbott got heckled at Melbourne University the other day during his red tape speech? Actually it was just two young coal businessmen keen to meet their hero! Yes, Victorian mining magnate Twiggy Palmcock, CEO of Excretum Mining and sidekick Michael Higgins Beaumont, founder of Australia's Young Coal Champions, who were both keen to meet their hero and leader of the Liberal Party .

They attended the Secure the Future Conference to thank Tony Abbott personally for his "unwavering support of the fossil fuel industry".

They explain in this video how they just wanted to say "Thank you Tony" and urge him to encourage exploitation of Victoria's low grade brown coal and continue the massive tax subidies for fossil fuel companies to keep them competitive with the upstart renewable technologies of solar and wind power.

"Because as we all know and as Tony has told us Climate change is a conspiracy theory invented by German zoo keepers to bring attention to their celebraty polar bears." said Twiggy.

The interuption came in Tony's speech at the Secure the Future Conference when Twiggy and Michael walked up on stage and stood next to Tony Abbott, introduced themselves and attempted to sing their lauditory song.

Tony was at the conference making his 'Red Tape speech' to primarily businessmen. He warned that if elected Prime Minister next year, that some of the coalition's promises and policies may not be delivered immediately and may need to be phased in and that he would promise to cut red tape, as well as the Carbon Tax and Minerals Resource Rental tax which are projected to raise some $40 billion.

After security guards dragged Twiggy Palmcock and Michael Higgins Beaumont off stage he told the audience of business people that not much had changed at university since his student days. "Isn't it fantastic to see that undergraduate humour does not change," he said.

Well, yes it does Tony. Punching the wall intimidating a woman when you loose the election to become SRC President is not very nice behaviour even back in the 1970s. Twiggy and Michael were just trying to cut some of the red tape in congratulating you directly on your continued support for the Greenhouse Mafia in Australia. What better place than when your presenting your 'Cut the Red Tape' speech?

I am sure Twiggy and Michael were very concerned when in an interview Tony Abbott argued for a simple carbon tax in 2009. But now Tony has renounced that brief controversial position and remains a climate denier at heart, despite the volumes of reports and scientific papers written on the subject by the liberal intellectual elite like this one from the Australian Academy of Science in 2010. Maybe it is time we had a 'flat earther' as Prime Minister who places his faith in mining companies and greed rather than in boring white coated climate scientists?

You can read more on Hecklers cut into Abbott's red tape speech at the ABC News. But thanks must go to those subversives at Quit Coal for bringing the full story to light. 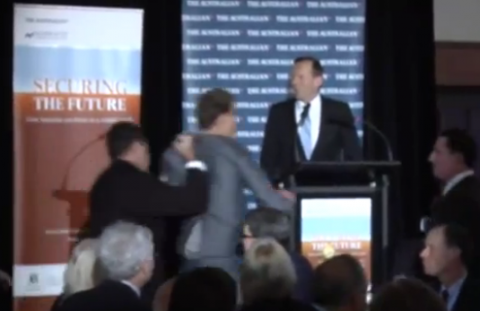