Gerry Georgatos - courtesy National Indigenous Times - nit.com.au
"They are going to kill our people, some will die quickly, some by a thousand cuts," said Wiluna Elder Glen Cooke.

"We don't want Maralinga all over again where our people will be hurt and die sick and young, and for decades the truth hidden."

"If they bring uranium out of the ground at Wiluna and radiation to our people many of our young children today will be tomorrow's Yami Lesters."

Toro Energy's Wiluna uranium project's final environmental approval looks near certain from the Environmental Protection Authority (EPA) and the uranium mine will become the front runner for more uranium mining throughout Western Australia and predominately on Aboriginal lands where communities continue to thrive - for now.

The many years-long ban on uranium mining in WA has been lifted.

Angst has ripped through Aboriginal communities State-wide and especially at Wiluna and Yeeliree.

"The Government has not said that they cannot guarantee against radiation poisoning of our people," said Mr Cooke.

Yeeliree Traditional Owners and chairperson of Western Australians Nuclear-Free Alliance (WANFA), Kado Muir said all the Elders from across WA who make up WANFA cannot believe the "high risk" claim by Dr Vogel of "very low" radiation exposure risks to communities nearby the proposed Wiluna mine. "There are no genuinely safe levels with radiation - radiation exposure at any level is bigger than exploding dynamite. Chernobyl and Fukishima didn't get it safe, so what makes us think Australia will? This is our peoples lives they are putting at real risk, not theirs."

"How many Western Australian communities have suffered lead and aluminium poisoning from leaks along freight routes and from refineries, and it was said risks would be contained but they weren't? They skyrocketed past base levels and with uranium a thousand times more dangerous, what are they saying? Are they mad? Uranium belongs in the ground, not above it."

"Don't our peoples, our communities, our Country matter to these Boards?"

The EPA claim to have tightened conditions around the uranium project after an independent appeals committee made 21 new recommendations after appeals were made by independent groups, the Conservation Council of WA and WANFA and its Elders to the EPA decision to approve Toro Energy's Wiluna uranium project.

WA environment minister Bill Marmion said nine appeals had been lodged against the EPA decision in May. The EPA has three uranium proposals before it. "I am satisfied the appeals committee has carefully considered all the matter raised in the appeals and have accepted their recommendations," Mr Marmion said in a statement. He said he would consult the Radiological Council and the Ministers for Indigenous Affairs and Health.

Mr Muir and Mr Cooke pointed out that the no extra recommendations were made for managing radiation.

Toro Energy's Board will make its final investment decision on whether to give the go ahead to mine uranium early next year.

Traditional Aboriginal Elders have never been more concerned about the sovereign risk to Country, and of its very health, with the loom of uranium mining. The Western Australian Nuclear Free Alliance (WANFA), made up of Aboriginal Traditional Land Owners from the Pilbara, the Kimberley, the Goldfields, the Great Victorian Desert, the Central Desert, the Gascoyne, Perth and the South West, and alongside their supporters, have declared "that it is a must do in preventing uranium mining on Country."

The WANFA met for its annual conference on September 16 at the registered sacred site of Kutunatu Ngurra camp just outside of Leonora, in the ochre heart of Western Australia.

WANFA chairperson Kado Muir said, "(The Elders and Traditional Land Owners) support Aboriginal sovereignty across all Aboriginal territories in WA. The State Government and its industries need to respect the basic human rights of Aboriginal peoples."

Mr Muir said that everyone is concerned in light of the "fast-tracking of the Toro Energy Wiluna uranium project assessment." Mr Muir had invited Environment Minister Bill Marmion to meet with WANFA representatives, Elders and land holders but he declined. "He shows an unwillingness to engage with our local Elders and community," said Mr Muir.

Despite one approval after another, and the dismissal of appeals, by the Government to the prospective uranium miners Mr Muir said that WANFA is determined "to stop the poison of uranium mining contaminating Aboriginal lands."

Mr Muir said that WANFA will "challenge the Australian Uranium Association's Indigenous Dialogue Group who are representing the industry rather than a true Aboriginal community view."

"We will also continue to expose anthropologists, archaeologists and pro-industry consultants who attempt to validate negligent practices of the mining industry."

Ultimately, WANFA is calling for an independent public inquiry or royal commission into uranium mining. "We need an inquiry and it will be called for, and when this happens then maybe Governments and the nuclear industry will be forced to stop minimising and trivialising the dangers of radiation," said Mr Muir. 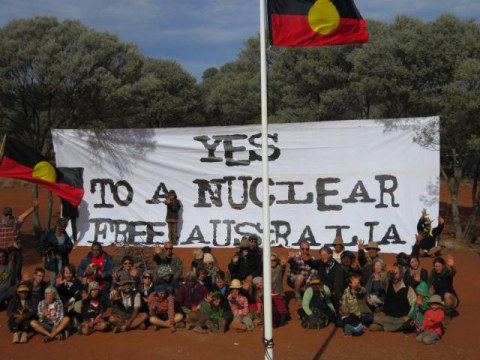 The Fukushima Daiichi nuclear disaster (福島第一原子力発電所事故 Fukushima Dai-ichi ( pronunciation) genshiryoku hatsudensho jiko?) is a series of equipment failures, nuclear meltdowns, and releases of radioactive materials at the Fukushima I Nuclear Power Plant, following the Tōhoku earthquake and tsunami on 11 March 2011.[5][6] It is the largest nuclear disaster since the Chernobyl disaster of 1986.[7]

Chernobyl: Consequences of the Catastrophe for People and the Environment was published by the New York Academy of Sciences.

It is authored by three noted scientists:

Dr. Alexey Nesterenko, a biologist and ecologist in Belarus; and

Dr.Vassili Nesterenko, a physicist and at the time of the accident director of the Institute of Nuclear Energy of the National Academy of Sciences of Belarus.

Its editor is Dr. Janette Sherman, a physician and toxicologist long involved in studying the health impacts of radioactivity

It concludes that based on records now available, some 985,000 people died, mainly of cancer, as a result of the Chernobyl accident. That is between when the accident occurred in 1986 and 2004. More deaths, it projects, will follow.

The book explodes the claim of the International Atomic Energy Agency– still on its website that the expected death toll from the Chernobyl accident will be 4,000. The IAEA, the new book shows, is under-estimating, to the extreme, the casualties of Chernobyl.

Decades later, stories emerged about what happened to the people living near the site. Aboriginal man Yami Lester recalls the day on which the explosions sent black clouds through his country.

The Public Health Association, the Council of Trade Unions, and the Arid Lands Environment Centre are calling on the Alice Springs town council to oppose the planned nuclear waste dump at Muckaty Station.

Muckaty Station, near Tennant Creek, has been put forward by the Federal Government as the best solution for the nation's nuclear waste.

The proposal has been strongly opposed by some traditional owners and environmentalists.

http://www.youtube.com/watch?v=xcuNpT84Ovo
once it is in the water systems it's all over

Death toll for Fukushima could eventuate into the millions

The death toll for Fukushima could eventuate into the millions.

Radioactive ores were first extracted at Radium Hill in 1906, and Mount Painter in South Australia in the 1930s, to recover radium for medical use. Several hundred kilograms of uranium were also produced.[1]

In terms of production, Canada is the largest supplier to export markets, followed by Kazakhstan and Australia.[2] Australia exported 50,235 tonnes of uranium oxide concentrate in the five years to 2008, worth A$2.9 billion.[1]

At present day values, proven Australian reserves are valued at more than $300 billion. According to the World Nuclear Association this will increase as uranium ore prices rise on increasing demand, with more countries turning to nuclear power generation as a means of dealing with global warming and declining stocks of fossil fuels, and as exploration discovers new reserves: 2009 ABARE forecasts predict a 38% increase in export volumes and an 86% increase in export revenues by 2014.[1] However, following the Fukushima meltdown in early 2011, many countries are planning to scale back their nuclear power production, with some setting deadlines for a complete shutdown of all nuclear power reactors. It is expected that this may impact on demand for Australian Uranium.

For several decades uranium mining has been a major part of the Australian political landscape, with opposition groups citing the wide ranging environmental impacts, indigenous land access and nuclear proliferation as reasons for ceasing or restricting the industry. The debate has resulted in limitations on mining and export activities, with Federal and State governments occasionally flip-flopping on public policy. In the meantime, mining companies have pursued exploration activities, and in some instances stockpiled mined ore, with an expectation that the eventual removal of restrictions and uncertainties will occur due to the scale of economic benefits on offer.

First uranium mine in WA a step closer

Look at this image and let me know if uranium is worth it?