After an early visit to the gates on July 12th, the Lizard's Revenge kicked off in earnest on July 14th. As promised the Lizards Revenge took its party to the "Gates of Hell" on July 14th. Hundreds marched to the gates of the mine including Arabunna elder Uncle Kevin Buzzacott. The numbers camping has swelled from a few hundred on the first day to approximately 400-500 campers by day two.

Excerpt from Day One Press Release

“We have full authority to be here from senior Kokatha custodians,” said Uncle Kevin Buzzacott.

“People worldwide are against the nuclear industry, especially since Fukushima. It’s in the public interest to close the mine. People need to look and learn how deadly this industry is. The sooner it stops the better. We are here to make a strong stand for country, and are fighting to save our sacred land. If people really knew what they were destroying they wouldn’t touch it,” he continued.

“Whilst the police have publicly stated that our right to protest will be upheld, policing approaches to date have set an unreasonable precedent for depriving people of their civil liberties and their right to engage in political demonstration and communication,” said Nectaria Calan.

“After key details relating to the protest have been publicly available for a number of months, those seeking to participate have arrived to discover road blocks preventing access to the site and a ‘protected area’ declaration, under the Protective Security Act, that suspends their freedom of movement, rights to privacy, and other civil liberties.”

“Protesters currently have to obtain permission to leave and enter the camp site. By barricading the main access road to the site, police are forcing attendees to be escorted through the protected area, allowing police to require people in vehicles to provide evidence of their identification.”

“This is an extraordinary infringement on civil liberties. Peaceful demonstration and political communication is not a criminal act. Such moves by the police contradict their public statements that they will respect our right to protest.”

“Despite over-policing and ongoing harassment of those travelling to the event, extending as far as road blocks in Port Augusta, numbers at camp continue to grow,” continued Ms Calan.

Uncle Kevin Buzzacott said, “If people want to learn how to love the land and make peace, they are welcome to come here and join us.”

Around 450 people tried to march to the "Gates of Hell" again on Day Two of the Lizards Revenge. People dressed as nuclear mutants to highlight the dangers of radiation.

The Lizards Revenge music and arts festival and protest camp will take place at the gates of the Olympic Dam mine (or close by) from the 14th-18th July 2012. The festival will include a variety of musicians, bands and artists from around the country, a solar powered sound system, wind powered cinema, mobile artworks and the message that there is strong community opposition to uranium mining and to South Australia hosting the largest uranium mine in the world. We anticipate a vibrant protest camp which combines educational workshops, entertainment and non-violent direct action. We will converge on the site of the current mine and approved expansion as the South Australian and Australian governments have failed to put the environment and people’s health before short term economic concerns. The impacts of this project will remain long after BHP Billiton packs up, repatriates its profits, and moves on to the next project.

BHP Billiton plans to supplement the existing underground copper and uranium mine near Roxby Downs with a massive open-cut mine. The open pit will be 4 kilometres long by 3.5 kilometres wide and 1 kilometre deep. This is around the size of Adelaide’s CBD.

The ore body is the world’s largest known uranium deposit

The mine will require nearly 250 million litres of water per day. 42 million litres will be extracted from the Great Artesian Basin, with the remainder to come from a desalination plant proposed for the Upper Spencer Gulf.

The tailings dams will cover 44 square km which BHP propose to cap with rock in order to isolate them from the environment for the billions of years they will remain radioactive.

The tailings dams are designed to leak into the underlying rock and aquifer. For the first decade of the mines life BHP estimate a maximum seepage rate of up to 8 million litres of tailings per day, levelling out at 3 million litres per day for the remainder of the mines life. BHP acknowledge in their Environmental Impact Statement that there will be elevated levels of uranium in the groundwater.

BHP predict that the impact of digging the largest hole in the world will have such a massive impact on the groundwater system that this groundwater will be diverted to the open pit void. If they are mistaken, the contaminated groundwater will eventually discharge into Lake Torrens.

The brine output from the proposed desalination plant will potentially threaten the marine environment and the breeding ground of the Giant Australian Cuttlefish.

Uranium mining is the beginning of the nuclear cycle – the world has recently witnessed the potential consequences of nuclear energy, the issue of nuclear weapons is ever present and connected to mining this material to begin with, and the problem of the long term storage of radioactive waste remains unresolved.

The Lizard’s Revenge is named from an Indigenous dreamtime story of a sleeping lizard, who is said to be in the ground at the site of the Olympic Dam uranium mine. This legendary lizard has yellow poison in its belly. It should not be woken. This story carries an ancient warning about the dangers of uranium. Stories from other Aboriginal nations from around the country carry similar warnings.

Aims of the event:

- Close down the mine
- Run the festival on renewable energy (solar and wind power) , showcasing alternatives to nuclear power
- Bring people out to the desert so as to contextualise the issues. For many the mine is “over there,” too distant to really be a concern.
- Create a space which combines education, community dialogue, music, arts and resistance

The political process does not provide adequate avenues for community input and consultation: 4000 submissions to the Environmental Impact Statement still saw no substantial changes to the guts of the proposal

Bipartisan support in SA for the project has effectively closed political avenues for change. As the press would be aware, Uncle Kevin is also challenging the approval of the project through legal channels. More information on this is available on request.

The Lizards Revenge was first announced on the 10th October 2011, coinciding with the State and Federal approvals of the Olympic Dam expansion. Since then, Rio + 20 in June this year has highlighted the failure of the concept of sustainable development and the failure of individual governments and the international community to genuinely address the ongoing environmental destruction that has become a feature of our age. Whilst governments and corporations pay lip service to sustainable development and environmental concerns, business as usual continues and economic growth is pursued as a goal in itself, with no reference either to people’s needs or environmental and social impacts. The main beneficiary of this growth model is big business.

In Papua New Guinea (PNG), BHP has left a legacy of environmental devastation at the Ok Tedi mine, which has received international attention due to its practice of dumping the mine tailings and other waste directly into the Ok Tedi river. The company has since cut and run, after securing their indemnity from future liabilities and legal claims, essentially absolving itself of any responsibility for the ongoing impacts on the local community and environment. In the mid-90’s, in response to a lawsuit by 30 000 indigenous locals, BHP helped the PNG government draft legislation that criminalised participation in the lawsuit, leading to international condemnation, an out of court settlement and further lawsuits alleging that the terms of the agreement were not met. In 2010 BHP was refused re-entry into PNG.

BHP has shown similar contempt for taking responsibility for the impacts of its actions in Australia. The recently amended Indenture Act which will apply to the new mine continues to exempt BHP from the Aboriginal Heritage Act 1988, which applies elsewhere in the state. Instead the company recognises the Aboriginal Heritage Act 1979, which was never made an operating law in South Australia. It is preferred by the company due to its weaker consultation provisions in relation to Aboriginal heritage, and the company is further granted exemptions from parts of this Act. The effect of these exemptions is that BHP has absolute discretion as to what Aboriginal sites are recognised and protected. BHP have essentially chosen which parts of which legislation should apply to them.

It is clearly a conflict of interest to have a corporation with a commercial interest in a piece of land also making decisions as to whether this same piece of land has competing non-commercial values.

At this stage the company does not have a comprehensive Mine Closure Plan. This has instead been added as a condition to the Federal Governments approval of the project. It has recently been argued in the Federal Court that a plan dealing with the closure of the mine should not have been added to the approval as a condition but that such a plan is a critical part of the project design, and hence should have been submitted prior to approval and considered as part of the approval process.

Where does Uncle Kevin Buzzacott and the Arabunna fit into all of this? 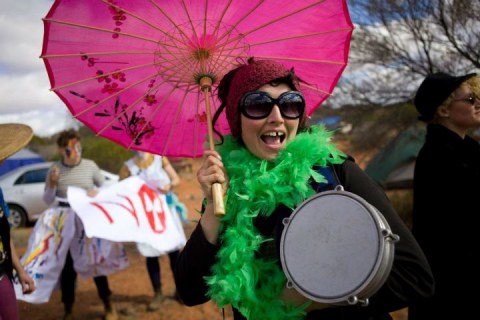 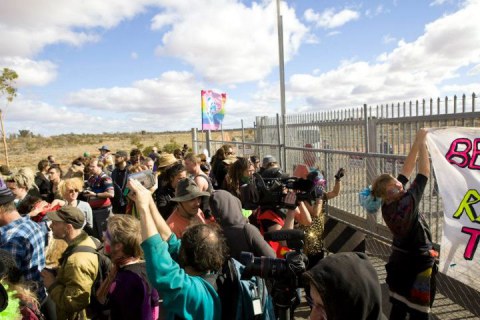 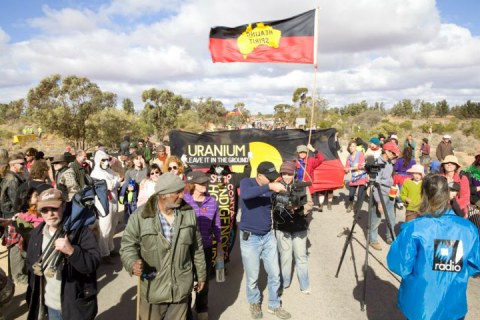 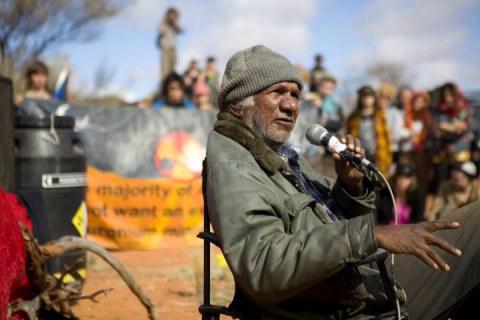