While the Perth Heirisson Island Tent Embassy continues to come under attack with ongoing police raids, the Brisbane Tent Embassy coordinators have warmed to growing support from within their community and from other township representatives who have visited their site.

Moree has now also joined a growing list of cities and towns by establishing a Tent Embassy.

Musgrave Park Tent Embassy coordinator Wayne ‘Coco’ Wharton said more than 2,000 people have signed the guest book in a week of the public opening of the Tent Embassy site and acknowledged the Mums and Bubs Playgroups at their site as a resounding endorsement of their operations.

“It’s fantastic that those mothers feel safe to hold their playgroup sessions at our camp site,” Mr Wharton said.

“We also hold community meetings here on a Wednesday evening and again on Saturday morning to keep our people informed on what we’re doing.”

Yarraka Bayles said they decided to have the Mums and Bubs Playgroup in Musgrave Park to show their support for the Embassy.

“We continue to bring our children back regularly as it is a family friendly environment where we can sit around the camp fire and yarning circle listening and sharing stories about the journey and the importance of the Embassy 40 years on.

“It is important to pay tribute and acknowledge our Elders and people who are no longer with us, who died in the struggle, fighting for what we have today.”

Respected Brisbane Elder Country Maddison said he was happy to have his students from the dance academy he tutors who danced at the sacred fire ceremony last week.
“We have to get all our people involved in our grass roots movement - the young and the old all have a part to play,” Mr Maddison told the National Indigenous Times.

Peter Scuthorpe said the Moree delegation that attended the official fire ceremony at the Musgrave Park Tent Embassy were so impressed with the way the event was received by the public they have planned an opening of their own Tent Embassy in Moree over the Easter weekend.

“As a young man it empowers me to see the strength in our people of them wanting to start a grass roots movement from a Tent Embassy base,” said Mr Scuthorpe

Moree Goomeroi Tent Embassy coordinator Browyn Spearim confirmed their opening and added with delight that a brother of one of the founders of the original Tent Embassy in Canberra would light their sacred fire at their Lloyd Park site in Moree on Friday at 10.30 am.

“The location for our Tent Embassy is also significant as it is near the location where Ronald ‘Cheeky’ McIntosh was shot dead in the early hours of the morning of November 5, 1982 following a race-related pub brawl.”

Warren Ledingham and Steven Delamothe were found guilty of manslaughter and each jailed for 14 years for their part in McIntosh’s death.

“The council officials and police have visited our site a couple of times but haven’t told us to shut it down.

“No matter what happens between now and Friday, we will still light the sacred fire and have our neighbouring tribes share their cultural dances with our mob, “ Ms Spearmin said.

Liz Munro, another Moree Goomeroi Tent Embassy coordinator said their setup has been in response to community demand for a real change - right here – right now. “Our starting point (innegotiations) is the unbroken and unbeaten Sovereignty of the Goomeroi people,” Ms Munro said.

The Moree Sovereign Embassy was launched on Saturday 7th April 2012. The lighting of the sacred fire and a remembrance ceremony for the late Billy Craigie featured.
Billy Craigie who was one of the four co-founders of the 1972 Aboriginal Tent Embassy, grew up in Gomilaroy country near Moree. He was a Gomilaroy warrior, and last month was laid to rest in a traditional burial. He died of a heart attack at the place he helped to build — "the Block" in Redfern. 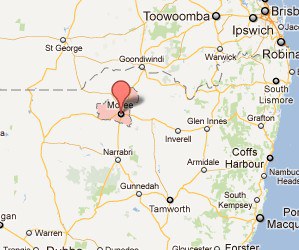