A colour leaflet is available advertising the 8th anniversary of 17 year old tj hickey who died as a result of a redfern police chase on st. valentine's day 2004 when he was rammed by a police vehicle that catapulted him onto a spiked fence.

on this 8th anniversary we are attempting to build our numbers to show the redfern police and the nsw government of barry o'farrell that we are not going to forget our true obligation to the memory of tj, his mother gail hickey and his sisters. as they will never forget the injustice that was done to tj on that infamous day, nor should we.

all of us, whether aboriginal or non-aboriginal, owe a duty of care to tj to find the real peace that only full justice will allow.

we ask all who can possibly make the rally on tuesday 14th february 2012 to join us in support to have a new and open coronial inquest put in place, one that would allow for all witnesses and all the evidence that was blocked by the original inquest and police to be presented in argument that the redfern police are guilty of the death of tj and the subsequent cover-up and exoneration of the true facts of the matter by the police presenting a corrupt and false brief of evidence to the coroner. the carr government-appointed legal team forced upon gail hickey at the time are also involved in the conspiracy to exonerate the redfern police of all blame.

we have no funding to assist in travel or accommodation but still plead with you that if you are able to attend and join in the call for justice, then please do so. the mightier our numbers, the louder is our voice that we no longer ask for justice, we demand it as our right.

the genocide of our people must stop and it is up to you and me, speaking as one, that will stop it.

should you not be able to attend on the day then i ask that you write your support for our stand and email it to me before the 14/2.

two other matters of importance that were called for last year was for the plaque given to the family by the uts aboriginal students committee be allowed to be attached to the brick wall below the fence line where tj was impaled. the nsw dept. of housing and the redfern police are still blocking that this be done. the police want the words 'police chase' changed to 'tragic accident'. under no circumstances was this in any way a 'tragic accident', this was a deliberate action taken by a member of the redfern police and this officer must finally be brought to justice.

the other matter was the call for a death in custody memorial to honour those nsw aborigines who have died in custody from 1 january 1980 to the present day. support was sought for this to be done and one of those who replied was the sydney lord mayor, ms. clover moore, who in a signed letter stated that she agreed with the call for the monument and she would ask ms. rebecca martin and ms. melodie-jane gibson to arrange a meeting with me and mick mundine to discuss the matter. the letter is dated 10/2/2011 and, to date, nothing has been done to bring the matter to fruition. an isja letter-headed advise letter was hand-delivered to mick mundine in his office at the block explaining the call for the monument but, again, to date, no reply from mick or others of the redfern housing co. have bothered to reply.

the other matter of import i will make here is that 14 february is also the 8th anniversary of the sad loss of a most indefatigable fighter for justice, my aboriginal sister, letty scott who fought for over 20 years to bring the murderers of her then-husband, douglas bruce scott, in the berrimah gaol in darwin in 1985. i had the great honour to work with letty in that fight for justice. letty, you are still an inspiration to those of us that are left.

the family of letty scott in alice springs are now involved in another dic struggle for justice with the death of 28 year old terrance daniel briscoe who died in the cells of the alice springs watch house on the morning of 5th january 2012. to the family i offer not only my heartfelt sympathies but also my assistance in the fight for justice.

we live and work on the stolen lands of the gadigal people. 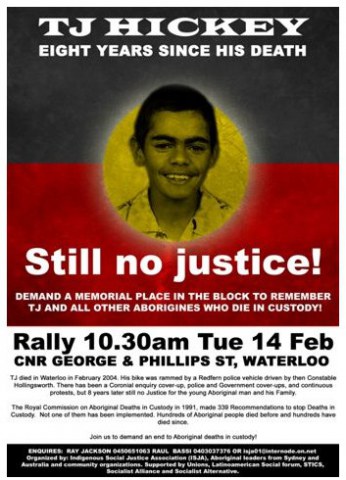 Ray Jackson and some others should be ashamed!!!!

While I feel for the family on this sad day it shouldn't turn into another "white" and "police" bashing excercise from people like Ray. If you have issues with certain members of the police why not talk to them yourself. I know TJ's family have done that in the past and why not always agreeing they treat each other with respect.

If this turns into a day where the extremists from the 70's try to stir up anger it could set us back even further.

I'll always be there fighting for Aboriginal Rights but there needs to be a better way then swearing, abusing and stand overing people. ray Jackson and some others should be ashamed!!!!

Re: Call-out to 8th anniversary of the death in a police ...

He crashed his bicycle end of story. Pretending that the police 'killed' him won't bring him back.