New research by CSIRO scientists is showing a trend for fewer tropical cyclones forming off the Western Australian coast, but those that do form may become more intense and potentially destructive. The results apply across the Australian region according to CSIRO in an interview with Dr Debbie Abbs from CSIRO Marine and Atmospheric Research.

Dr Debbie Abbs said there could be a 50 percent reduction in the number of storms in the second half of this century - from 2051-2090 - compared to the period from 1971-2000. The climate model developed by Dr Abbs' team also indicates a distinct shift towards more destructive storms. "Despite a decrease in the number of tropical cyclones, there is a greater risk that a tropical cyclone that forms will be more severe in future," Dr Abbs said. "Even a small increase in cyclone intensity is concerning because of the threat to life, property, industry and agriculture," said Dr Abbs in a CSIRO media release.

The research work is being done on behalf of the Indian Ocean Climate Initiative (IOCI) which is a strategic research partnership between the WA government, CSIRO and the Bureau of Meteorology.

Tropical cyclone formation is a complex process which scientists are continuing to study, with global long term trends in cyclone frequency still difficult to determine from natural variability. Sea surface temperatures, wind shear, temperature and humidity of the atmosphere all contribute to cyclone formation and behaviour.

"If we get changes in either the wind shear or in the temperature and humidity characteristics of the atmosphere, then that will affect the ability of the atmosphere to form tropical cyclones, and we find that is happening, but the relative contributions are still under investigation. Some of our climate models say that it's the shear is the most important, and other climate models say it's the temperature and humidity characteristics that are the most important." said Dr Abbs.

The results apply not only to western Australia but the whole Australian region according to Dr Abbs. "Our modelling shows a very consistent picture of decreases in cyclone occurrence across the Australian continent as a whole."

The cyclones that do form are likely to be larger and of greater intensity, said Dr Abbs, "There's a greater likelihood, or greater risk, that the cyclones that do form will form in the category three, four and five level. To say that they'll be Cyclone Yasi is pushing it a little bit too far, but there's a greater risk that they will be at that level."

The destructive potential of cyclones will increase with a change in the size of tropical cyclones according to the research, "We're finding larger cyclones, and that's cause for concern because it's the size of cyclones that affects the destruction from waves and storm surge." said Dr Abbs. 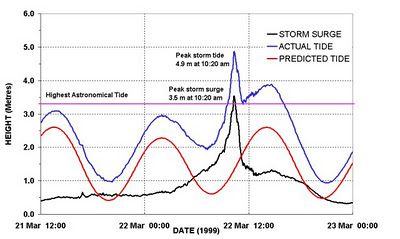 The CSIRO and Bureau of Meteorology issued a major new report in November 2011 on Climate change in the Pacific, scientific assessment and new research in which they say that many Pacific Island nations will experience higher temperatures, sea level rise, and changing rainfall.

There is also a trend for cyclones moving further south, so far by about one degree or 100 kilometres. "So that means that when they eventually peter out or decay it's going to be a little bit further south than we expect today." said Dr Abbs.

Larger cyclones of greater intensity will have a major impact on human structures. Adaptation regimes need to be considered to avoid disasterous impacts such as ocurred recently with Cyclone Sendong (Washi) causing torrential rain then flash flooding in the Philippines resulting in over 1500 deaths. The Guardian has reported that the torrential rain and flash flooding circumstances were predicted in 2009 as part of a UN exercise in disaster reduction planning. The Philippines government never got around to implementing a plan to reduce this hazard.

The Bureau of Meteorology also reports on Cyclone frequency and intensity:

Each of the above studies finds a marked increase in the severe Category 3 - 5 storms. Some also reported a poleward extension of tropical cyclone tracks. 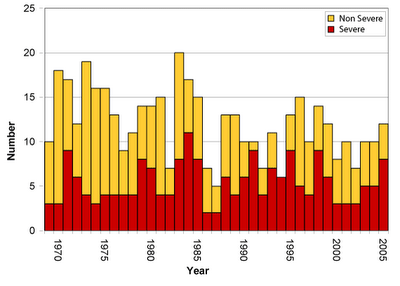 The research also feeds in to State Government and Local Government planning for storm water disposal, flood mitigation and protection of buildings from storm surge in the future.

Statistical modelling by Kuleshov et al from the National Climate Centre, Bureau of Meteorology published in January 2010 in the Journal of Geophysics Research found that there was no apparent trends in the total number or intensity of Tropical cyclones in the Indian Ocean, South Pacific and Australian regions. (See abstract)

However a 2010 paper in Nature Geoscience by Thomas R. Knutson et al on Tropical cyclones and climate change (abstract), found that:

"...high-resolution dynamical models consistently indicate that greenhouse warming will cause the globally averaged intensity of tropical cyclones to shift towards stronger storms, with intensity increases of 2-11% by 2100. Existing modelling studies also consistently project decreases in the globally averaged frequency of tropical cyclones, by 6-34%. Balanced against this, higher resolution modelling studies typically project substantial increases in the frequency of the most intense cyclones, and increases of the order of 20% in the precipitation rate within 100 km of the storm centre. For all cyclone parameters, projected changes for individual basins show large variations between different modelling studies."

Karl Braganza, David Jones and Yuri Kuleshov, climatologists from the Bureau of Meteorology, also state the difficulty in determining trends for cyclones in a December 2011 article on The Conversation website - Australia expecting an active cyclone season, but future cyclones still hard to predict - but conclude that climate modelling of global warming predicts a trend for fewer storms but an increase in storm intensity:

For large increases in greenhouse gases, extensive climate modeling has pointed to some consistent future changes. Future projections based on physics and using high-resolution dynamical models consistently indicate that greenhouse warming will cause the globally averaged intensity of tropical cyclones to shift towards stronger storms. The average intensity will increase with global warming.

Existing modeling studies also consistently project decreases in the globally averaged frequency of tropical cyclones. In other words, there will be fewer overall storms.

However that is balanced against the projected increases in the frequency of the most intense cyclones as global warming intensifies. This suggests a future world where tropical cyclones are less frequent, but those storms which do occur are more dangerous.

So, the long term prognosis is fewer tropical cyclones making landfall, but the ones that do are likely to be more powerful and more destructive. Climate Adaptation measures will be important to reduce the risk to people. Disaster management planning will be important along with upgrading planning and building regulations to take account of increased wind speed, flash flooding, and extreme sea level due to storm surge associated with Category 3-5 tropical cyclones. While we may be able to reduce the risk to people, agriculture will certainly suffer from the impacts of more intense cyclones with stronger winds.

More Information:
Skeptical Science - What is the link between hurricanes and global warming? (2010) - includes links to several related scientific sources and summaries. 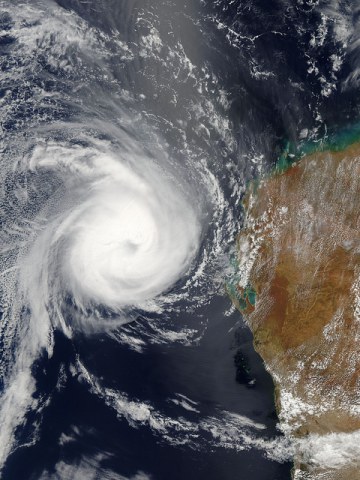 Is this research Peer reviewed? If not, should we believe it?

Takver is this research Peer reviewed? If it is not should we believe it?Or do you only ask for Peer review when the research goes against the crap you believe?LOL