Occupy Melbourne's strategy of "going mobile" to get around the "Notice to comply" orders, continually issued against them by the Melbourne City Council and enforced by the police, was taken to a whole other level today 4th December. Watch the video below to see the Occupy Melbourne "tent monsters" emerge from their tents and literally chase the confused police and council officers out of the Flagstaff Gardens. This is a beautiful example of how creative non-violence can use humour to highlight and undermine the absurd use of state power. The hilarity of these actions does not change the fact that the State is trying to prevent Occupy Melbourne through constant harassment from creating a public space to discuss and organise for a fairer, peaceful and more sustainable world. On the 5th of December the Federal Court will hear a case testing the legality of the Melbourne City Council's actions against OM. May their spirit of resistance stay strong - get down there and support them!
Related: Occupy Melbourne outfoxes council and police -- OM Digest for news about the campaign -- OM Monsters on Youtube

Police are down in the park today (Monday) threatening to arrest people "wearing" tents and to remove the tents from them, despite being told the are naked underneath. This farce seems to have no end in sight!

Watch the livestream at:
http://www.livestream.com/occupymelblivest

This morning Occupy Melbourne was informed that Melbourne City Council would be attending Flagstaff Gardens with the intent to have Victoria Police charge Occupiers under a long-forgotten bylaw.

This response is not only a sign that the Melbourne City Council and Robert Doyle are clutching at straws in their attacks against Occupy Melbourne but it also shows that they are becoming desperate in th...e face of Occupy Melbourne’s peaceful resistance to Council intimidation.

On Sunday afternoon Melbourne City Council attempted to confiscate tents and other equipment used by Occupy Melbourne in Flagstaff Gardens but were forced to retreat after the tents stood up and started running around them. In pursuing this latest recourse we have been informed that anyone wearing a tent will be arrested.

In addition to today’s action one Occupier has been specifically targeted for his dissent. Carl Scrase, an active member of Occupy Melbourne, recently announced that he would run against Robert Doyle in next year’s Mayoral elections. Over the weekend Mr. Scrase was contacted by a media outlet who alleged that Mr. Doyle had criticised Mr. Scrase for accepting arts funding during 2010 and then criticising Melbourne City Council.

“Mr Doyle claims that because I accepted an Arts award from the City of Melbourne, this precludes me of being critical of the actions of the Lord Mayor,” said Mr. Scrase.

Mr. Doyle’s criticism can only be summarised as a belief that those who receive grants and funding from Melbourne City Council should adopt a servile and non-questioning attitude towards the Council. This is further proof that Mr. Doyle considers himself to be more Lord and less Mayor.

“The City of Melbourne is an excellent institution – it is the current Lord Mayor that I have problems with. In Melbourne’s history, we have enjoyed many wonderful Lord Mayors, however Mr Doyle is not one of them,” he said.

Video Goes Viral!
The Youtube clip has started to go viral with over 25,000 hits so far. The mainstream press has started to notice - see Channel Nine coverage here 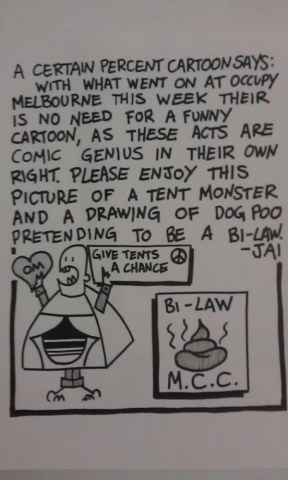 The Occupy Movement is endeavouring to fill the gap in public involvement in government in the true dense of democracy - government by the people. The reason for this is simple. The disconnection of the public from their representative which lies at the door of the party system. They vote as required by party,having no active connection with constituents face to face. This does not happen because MPs can ignore the people between elections as party power and influence is dominant.
Only secret ballots in parliament, to free MPs to actually represent the people in local forums, and give everyone the permission to join in, can stop the ruination of our pretence of democratic government, and remove the necessity for such protest movements as are growing up as 'rebel' movements.
New eBook 'OUT WITH THE PARTIES - A PARLIAMENTARY REVOLUTION' spells out the facts. Get out you iPad and go to Palmer Higgs Books to buy for $9,99. C U there! Basol Smith

I don't see any chasing, and the police don't look confused

I don't see any chasing, and the police don't look confused to me, either...

Congratulations for stirring the ire of these misbegotten souls

still chuckling over "loosers," seriously some people are into hate here, I have my differences with OM but they can still be congratulated for stirring the ire of these misbegotten souls...

It's not rogue police and council officers that are the problem. The very nature of the state and capital - and therefore the police who are there to guard these institutions, is repressive and oppressive.

More government is not an answer - self organisation, self management and direct control over our own lives within communities of local, decentralised power and resources will bring peace and equality.

Democracy always was and always has been a farce. From the ancient Greek city states til today, democracy has always required slaves and oppressed minorities to sustain it, to provide an underclass of cheap and unpaid labor. Whether that is in the form of the slaves and women of ancient Greece, or the entire populations of people who's land, labor and lives are stolen and displaced so a few people can prosper, 'democracy' on a state level will always be open to manipulation by a few savvy, callous, expliotative elites.

Direct democracy can only work on a smaller level where people can see and talk to each other face to face, and hold each other accountable. These local groups can then federate with one rotating representative (immediately accountable to and a spokesperson of their group) from each smaller group meeting up to negotiate and discuss on a larger level.

Occupy Melbourne has receded into the ether, is barely mentioned

And now, on the 17th January 2012, all is well. Occupy Melbourne has receded into the ether and barely rates a mention in the media. Where are those committed stalwarts who so earnestly participated in the ...er...street theatre of protest in late 2011. Gone, gone, gone, like a turd down the s-bend of life. The world keeps turning as before and the ripple on the pond of life slowly fades to nothing. God bless you all for your efforts, but it is time to go away.