The last few days have seen Occupy Melbourne develop some very creative tactics to prevent the convisgation of their property by the Melbourne City Council and Police. On Friday 25th of November after the Council served Notice of Compliance on the camp and came down with police protestors took their gear and left the park. However this wasn't enough a police and the police gave chase to the tents! One protestor, Sean Bedlam was arrested for "hindering council officers" whilst sitting on a tarp on the footpath outside the park. The police actually tried to place a bail condition on Sean that he was not to return to the park on the basis "he would just continue protesting". The Magistrate rightfully rejected this on the basis that Sean had every right to return to the park to protest or have a picnic if he so desired!
Related Keystone Kops and the great tent chase

On the Saturday 26th, protestors took there tactics one step further and completely skedaddled as soon as the 30 or so police and council workers entered the park. The sight of tents crossing the road whilst a group of bewildered police and council workers walked aimless around an empty park was really quite something. Soon after the police left, as if by some magical process, the OM tent city reappeared with its kitchen etc in full swing, which was just as well as that night saw the camp soaked with torrential rain.

This tactic of cat and mouse relies on the fact that the Council has to issue fresh compliance notices each time it wishes to call in the cops. It also relies on people coming down to the park to help take away gear temporarily in cars etc whenever the call goes it of new compliance notices. If you can help out please do so and help maintain the camp. OM now it has found a way to playfully evade or deal with the constant harrassment from the council and police can once again start dealing more with the politics of the movement. It was interesting to read that on the Saturday a motion was moved but did not pass to return to daily GA's. I think this reflects the growing strength and resolve of those people who are camping in the park. It is also apparent that the police themselves are becoming less enthusiastic about the daily absurdist events down at the park.

A repeat performance on Sunday saw fifteen police succesfully remove a mattress that had become sodden during the rain of the night before! 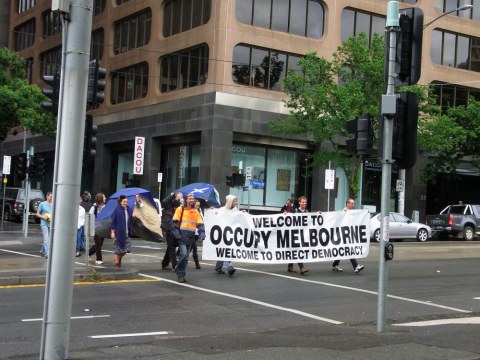 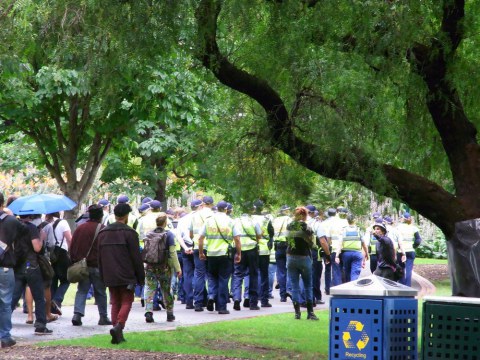 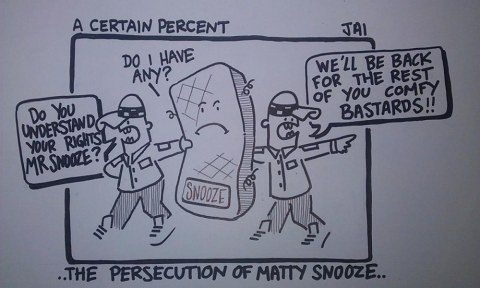 park of losers grow up!!!

You guys are idiots stop wasting the police precious time get a job and just leave our city and parks alone!!! You wasting taxpayers money where it could be used on more useful items such as paying nurses more increase ambulance car you are a park of losers grow up!!!

Bent on anihilating protests for the 1%?

You are an idiot yourself. Since when the government is going to use taxpayers money to pay nurses more or get better ambulance services? If anything they would again increase their take-home pays with the taxpayers money whilst idiots like you will allow it. The police and councils can stop wasting their precious time by allowing the protests instead of trying to supress it. If they are so concerned about the order, cleanliness, sanitation, etc why they don't tell protesters exactly what is required of them so that the protests can continue unabated? After all there were hundreds of public events organised over the past 50 years in public spaces with the blessing of the councils.... so why they are so bent on anihilating protests? Isn't it because they are doing it for 1%???