Mace, tear gas and tasers are allegedly being used on Melbournians supporting the Occupy Melbourne camp. Over 1000 people are currently occupying a major intersection in the city centre. Police are trampling people with horses.

Protestor BenjaminSolah tweets he "was punched in the stomach by a riot cop." Many other tweeters are claiming police have removed their name tags so they can't be identified, allowing them to assault protesters with impunity. At lease one person has sustained a broken nose as a result of police action according to this picture by Peacenicsta. http://twitpic.com/73cpud

SilenceWedge on Twitter says crowd has swelled five times since this morning, says, When you send in riot police against unarmed citizens, it doesn't matter what their agenda is. I know which side I'm on."

OccupyMelbourne twitter feed says, "We have collectively agreed not to sign any bail conditions that prevent us from returning to the city square".

Greens MP Adam Bandt asks, "Whether or not you agree with the protest, sending in riot police is not the way to respond to the non-violent #occupymelbourne". 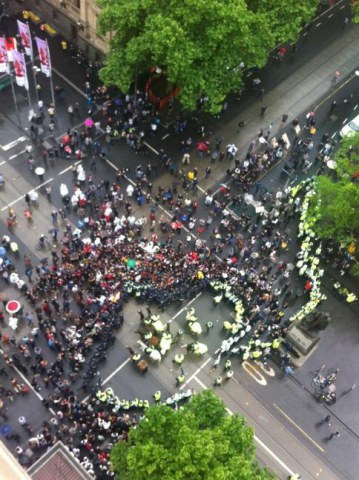 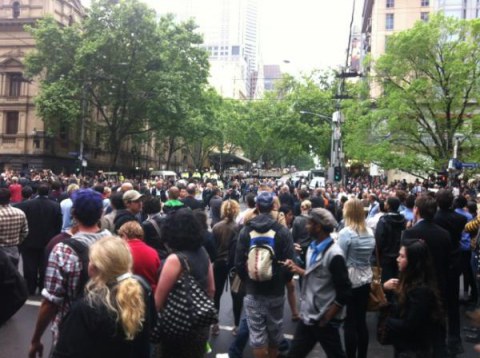 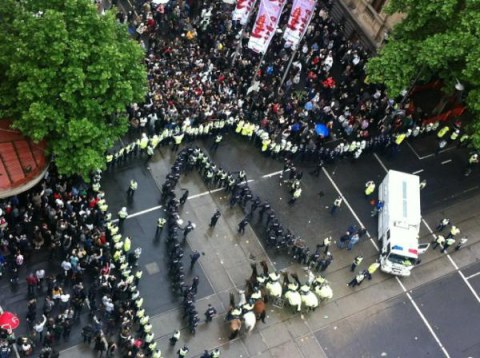 It can only be concluded that you're a moron..

Not leaving when asked is usually the NATURE of a protest

The whole concept of a peaceful protest is..wait for it..to protest..When peaceful protesters are 'politely asked' to leave and don't, it's usually because that's the NATURE of a protest.. It's kind of the point.We've seen what it led to and it was an unacceptable attack by police.
Your statement is the worst argument i have ever read, unless your a police officer.. If you cannot see that, You're a dumbass.

WOW THE CITIZENS ARE ACTING CONTRARY TO OFFICIAL PROGRAMMING...THAT THEY DARE TO HAVE AN OPINION IN THE FACE OF THE CORPORATE MINDERS AND OTHER ASSORTED RIGHT WING CAPITALIST THUGS IS HEARTENING...