The Occupy Melbourne day in Melbourne's City Square kicked off with approximately 750 people and a large number of police. Approximately 20 tents have been set up from various groups including refugee support and campaign groups, the gay marriage campaign, an indigenous tent, kids' spaces, and many others. People are busy making signs and placards with calls for solidarity. Throughout today and subsequent days there will be workshops, and a General Assembly at 4pm weekends or 6pm on weekdays.

The Occupy Melbourne kitchen group has a wishlist - if you can help please donate.

11AM The day began with a speech and smoking ceremony conducted by indigenous activist Robbie Thorpe. Robbie spoke passionately about the linkage between the system that has dispossessed Aboriginal people of Australia, the system that is destroying the planet and the system that is oppressing the majority of Australians. He received large cheers when he stated it was time for all of us to rise up! People are being directed to working group meetings that are happening throughout the day.

12 AM The day has a very organic feeling so far as the working groups begin to meet and people start to claim the space in the square. A speakers corner is in operation. The square is a hive of activity and noise as people sef-organise.

1PM About 300 people left the city square to march to the State Library to join the protest against Max Brenner with other pro-Palestinian activists. After speaches the demonstration marched around and Melbourne Central and the police completely shutting down the shopping centre, including access to thne station, for approximately an hour. Then they marched on Max Brenner at QV where they occupied the front of the Max Brenners premises for about half an hour. On the return march the demonstrators blocked the intersection of Burke St and Swanston Walk for a few minutes before returning returning to City Square.

The first motion to fail - that the '1%` not be vilified. Motion put forward that nothing can be bought or sold in the space. 'No commerce' motion roundly defeated.

"a motion that capitialism be renounced. big debate the use of the 'chinese whispers' human microphone. Motion put forward to open lines of communication with local, state & federal MPs. Big, big round of applause for the cops. Meeting closing out (6.08pm). Great mood amongst organizers and the crowd. About 500-600 in crowd." reports Mike Stuchbery via twitter.

From Reports from twitter by Mike Stuchbery (@mikestuchbery), Andrew Cheeseman (@Red__Revolution) and others. Read a detailed report of the General Assembly

Mainstream Press
Coverage in the Age 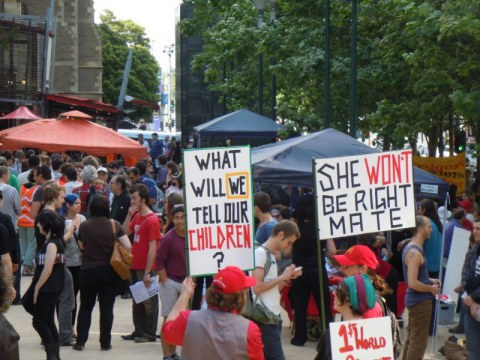 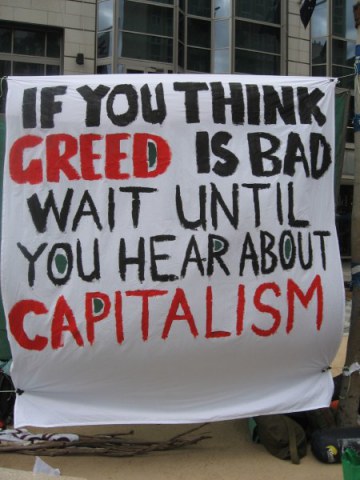 Here's another video from yesterday

Here's another video from yesterday: http://www.youtube.com/watch?v=E3vesDE5loM

I am Chrisentiae, a musician, acoustic guitar and harmonica (harp). I have been playing at Southbank since February 2011, once per week, the first fine day of the week, usually a 10:20 ish start and 11:00 am finish.

The reason I state this, is to express my interest in playing live music. I am a licensed busker, but I don't busk, I perform. I do not accept money.

I don't know whom to contact so I will just leave this message, for those who are organizing the protests. My politics are center left, and I don't have a TV so I really haven't followed the news much.

If you are interesting in performing ,Joan Baez + Bob Dylan 1964 style, and beatnik style music, then send me an email: chrisentiae AT iinet DOT net DOT au