In a referendum over the weekend Italians have rejected plans by Italian Prime Minister Silvio Berlusconi for nuclear power and water privatisation. More than 50% of the electorate needed to vote, including the estimated 3 million Italians living overseas, for the referendums to be binding. About 57% are estimated to have participated with official projections showing that 95% rejected water privatisation and 90% rejected Berlusconi's plans to build 4 nuclear power plants.

The referendums were undertaken with little television media coverage - an area where Berlusconi has much power controlling six of Italy's seven main TV channels in an effort to dampen the turnout. A constitutional court appeal by the Government to stop the referendums was thrown out. The questions covered nuclear power, two on water privatisation, and one on court immunity for Prime Minister and government ministers engaged on official buriness. It is the first time in 16 years a quorum has been achieved in any referendum in Italy.

"By rejecting nuclear power via a popular vote Italy has become the third country to exclude nuclear power in their future energy choice," commented Aslihan Tumer, Greenpeace International Energy Campaigner. "With Germany and Switzerland moving also away from nuclear, the path for an effective shift to an economy powered by clean energy is taking shape, we hope that other countries will catch this opportunity rather than risking to be left behind."

Italy started closing down ts four nuclear plants after the Chernobyl disaster in 1987, with the last one closing in 1990. In 2008 Berlusconi announced the intention to restart an Italian nuclear program in 2014, but imposed a one year moratorium on the plans after the Fukushima disaster earlier this year in Japan. Italy imports 90% of it's energy from neighboring countries.

At a press conference Silvio Berlusconi conceded that Italy would probably have to give up plans for nuclear power and instead focus on renewable energy. According to Wayne Chang an analyst with Brean Murray Carret & Co. in a news report on Forbes.com, solar stocks are rising with the costs of producing solar power continuing to dramatically fall and expected to be on on par with traditional energy sources as early as 2012 to 2013 in major European markets.

"By sticking to outdated technologies such as fossil fuels and nuclear, governments are not only gambling with the planet's future, but wasting time and money. The solutions to meet our modern electricity needs are already here: renewable energy paired with the latest efficiency technologies can and already are delivering, " concluded Tumer.

Chancellor Merkel earlier this year announced that Germany would shut down all 17 of its nuclear power plants replacing them with renewable energy and energy efficiency measures. Switzerland is also due to wind down it's nuclear power program as plants reach their end of life. In Japan a survey by the Asahi newspaper found that 74 percent wanted nuclear power phased out. 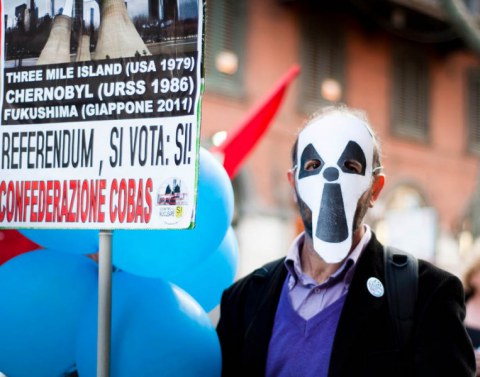