Twenty one protestors have been arrested trying to stop the start of construction of a section of a road bridge that will destroy a nationally listed heritage site that contains evidence of Aboriginal occupation of Tasmania going back 42,000 years. The Tasmanian Government claims it is "too expensive" to re-route the bridge demonstrating that in 2011 Aboriginal culture and heritage is still seen as both an impediment to "progress" and disposable.

Below is the text of an article from the Hobart Mercury newspaper about the protest and arrests.

ABORIGINAL protesters were handcuffed, arrested, dragged through the mud and forcibly lifted into paddy wagons by police yesterday, in angry scenes at the Brighton bridge construction site.

More than 40 protesters charged the two-metre wire fence surrounding work on the bridge over the Jordan River at 9.45am, claiming the destruction of 42,000 years of Aboriginal heritage at the site.

A force of 25 police stood across the gate to the construction zone and ringed its perimeter from just after dawn as the first heavy machinery moved onto the site, ready to arrest any protesters who tried to stop work.

Protesters shook the fence violently on several occasions, with some climbing over the top and standing in deep holes being dug by an excavator as work on the bridge began.

Police said 21 protesters were arrested on trespassing charges in three incidents and driven away to Bridgewater police station. One was additionally charged with resisting arrest.

All protesters, including Aboriginal leaders Aaron Everett, Adam Thompson and Nala Mansell, were bailed to appear in the Hobart Magistrates Court on May 30.

The heavy police presence involved at least five police cars, four paddy wagons and one police bus, as well as officers drawn from across southern Tasmania.

The senior police officer in charge of yesterday's Jordan River operation, Inspector Lee Renshaw, said Tasmania Police were obligated to protect the lawful right of workers anywhere to do their jobs.

But notices erected around the first-stage construction site where major earthworks to support a 70-metre span across the river are being built, proclaim the owner as the Crown or State Government.

"The lawful owner of the site is the department of Infrastructure, Energy and Resources," Insp Renshaw said.

"Our intention isn't to remove any protesters [from their neighbouring camp] but any incursions onto the [fenced-off construction area] will be removed."

Insp Renshaw said it had been necessary to use handcuffs on several of the protesters because they had struggled and resisted arrest.

Their actions had jeopardised the safety of themselves and police officers, Insp Renshaw added. But Tasmanian Aboriginal Council spokeswoman Sara Maynard denied any of the protesters had been violent or obstructive.

She questioned why handcuffs had been necessary when all protesters were only charged with trespass, not with obstruction or resisting arrest.

Nala Mansell yelled as she was arrested and escorted to a waiting police bus that her community would never stop fighting to protect its heritage.

"They can throw as many Aboriginal people in paddy wagons and lock up as many of us as they like, but we will continue to fight every day until this bridge is stopped," Ms Mansell said

It is unlikely Aboriginal leaders such as Ms Mansell, Mr Everett and Mr Thompson will be allowed to return to the Jordan River levee camp after being arrested in yesterday's protest.

Artefacts and stone tools dating back 42,000 years have been found spread through the depths of the soil on the Jordan River levee bank.

Archaeologists believe the site is one of a few found in Australia, and the only one in Tasmania, showing signs of continuous occupation, camps and hunting activities spanning such a long period.

The state and federal governments have ruled an alterative bridge location for the last remaining link of the federally-funded $176 million Brighton bypass highway too expensive, costing between $80 million and $140 million extra.

State Heritage Minister Brian Wightman told Parliament on Wednesday the historic heritage site would be protected by the bridge being built across it. 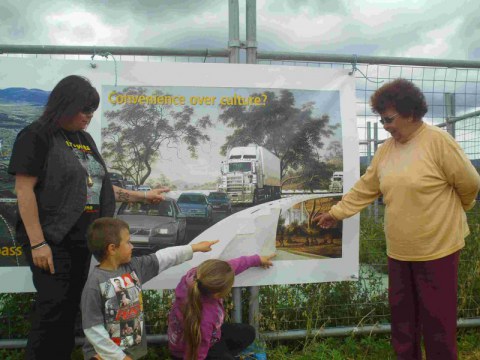 Stop voting and working. Start waking up to these thugs

arrest the government because they are greedy. First they hand back the land Muckaty in 1999 and now they wanna dump nuclear waste there because they have raped it to the max and now black people have a minute part of their land back. Hey, Tazzy govt, go back to England with your backwater mind. Take your penal colony mentality with you coz it does not belong in Australia in this year 2011. Not the real year actually! According to Christians it is 2011. That also needs to change....Wake up Australia. Stop voting and working. Start waking up to these thugs.