We are still shackled captives of government

Goodooga, northwest NSW, 4 February 11 - - “We have not had the shackles of control removed from our feet. We continue to be captives at the will of the government and their collaborators. We do not have liberators who work to free our people,” says Aboriginal political activist, Michael Anderson, announcing the next New Way Sovereignty Summit.

It will take place over the Easter long weekend at the Aboriginal Embassy in Canberra, commencing Good Friday through to Sunday, with a protest march planned for Monday from the front of the Australian National University to Parliament House.

Michael (Euahlayi name Ghillar) is the sole survivor of the four young Black Power activists who set up the embassy in 1972. He is the leader of the Euahlayi tribe whose lands straddle northwest NSW and southwest Queensland. He launched the New Way movement which has had four gatherings so far.

“We have no money to get anyone to Canberra, but it is up to you if you want to stop the Uncle Tom’s and Aunt Mary’s from saying they talk for us.”

His statement in full:

“The Easter gathering will focus on the need to make our voices heard loud and clear. We are too silent on the issues that we all speak of inside our homes; the time has come to get out there and let the government know that we are Aboriginal people whose nations are continuing to be torn apart as the whites continue to clear the lands of our people.

“Our rights - what rights? We have NO rights. Government owns and controls our culture through various legislative regimes. Government agents determine who gets funding to language programs. This is not a right for all.

“If you are political and have a history of political activity, your name will show up on the warning list that they have in the government computers.

“No black fulla or woman will get assistance for their mob if their names show up in their government no-go field of operations."

“People, I implore you to understand that all our names are in the government control system and any community programs that you want to start in your community must not include the older people who have been politically active and condemn the government collaborators who assist the government to maintain control over their own people.

“We have not had the shackles of control removed from our feet. We continue to be captives at the will of the government and their collaborators. We do not have liberators who work to free our people.

“One of the reasons why this is so is that too many of our people think the whites and the government are wanting to help us and build us up to be like them. Billions of dollars have been spent by government bureaucrats on supposedly improving our plight but what have we got? Tighter government controls, self-determination is nowhere to be seen. Our right to be who are does not exist.

“Other countries watching Australia cannot understand why we are so passive, considering what the government is doing to us."

“Look at what the police are doing to us and no one gets punished, because it is all within their terms of reference to criminalize all our youth. If they resist and ask questions, bash them or kill them if they want to be ‘smart Black Bastards’, which appears to be the rhetoric of the authorities.

“All being done in the course of the authorities carrying out their responsibilities. Aborigines are dispensable and we just made another statistic to be put on their charts and records, not someone whose life was worth anything, otherwise someone would have been prosecuted by now.

“If the white authorities want to kill our people then we need to stand up and fight back - at least being killed to liberate ourselves would be better than frying in the back of a police van or having your neck broken when they throw you into one head first, or when they bash you to death in a cell or while arresting you.

“What do we have that is ours? Think about it people. All the assets we acquired during the 70s liberation period are gone. All the services we controlled are shut down. Sure, people made mistakes; governments keep doing it all the time.

“There is a version of a saying used by Abraham Lincoln that we must all adopt if we are to commence a new liberation movement. ‘A house divided within, will surely fall.’

“In the 1920s the tribes of South Africa united despite their political and cultural differences to fight a common enemy and they ultimately defeated the South African racist machines. Australia is the other South Africa that NO ONE wants to talk about."

No one will help us, we must take steps ourselves

“No one will help us, people. If we want the governments to stop rolling over us then we must take steps ourselves.

“We have no money to get anyone to Canberra, but it is up to you if you want to stop the Uncle Tom’s and Aunt Mary’s from saying they talk for us.” 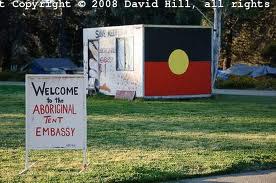 The topology of captivity and that of freedom

One aspect I find remarkable from the outside is that Australia is still largely undeveloped when it comes to internet connections (say the Nimbin radio geeks). It will be interesting to see whether it will end up with a centralised network where operators at the hubs can easily reconstruct who makes which requests, or a decentralised one where nearly everyone passes through requests from everyone else and no authority can spot any bottlenecks to monitor. When it comes to self-liberation such a difference might be decisive.