Over a third of the Australian state of Queensland has been declared a disaster area with the capital Brisbane on flood alert expected to experience it's worst flooding in living memory. Early report: Brisbane flood, from an island in suburbia. Total deaths from Queensland floods now number 27 - 10 from Rockhampton and regional floods in late December and 17 from the flooding in Toowoomba, Lockyer valley and Brisbane, with 14 people now listed as missing feared dead (revised down from 55).

This flood event follows widespead flooding across northern and central Queensland over the christmas holiday period that affected over 200,000 people, closing major highways and airports, closing most of the mines in the state, damaging crops, and causing billions of dollars worth of damage.

Friends of the Earth have warned about heavy metals released in flood waters and a Wiradjuri elder has warned of the risk of groundwater poisoning from gold mine at Lake Cowal if floodwaters breach the open cut mine owned by Canadian company Barrick Gold. The Great Barrier Reef is under threat from toxic pollution from floods according to the WWF.

The question that few people are publicly discussing is to what extent is climate change contributing to this disaster presently unfolding in Australia.

While Queensland is suffering disasterous floods, one of the world's largest insurers, Munich Re announced that the number of climate related disasters soared in 2010 killing as many as 295,000 people. "The high number of weather-related natural catastrophes and record temperatures both globally and in different regions of the world provide further indications of advancing climate change." said Munich Re in a press statement. Nine tenths of the disasters in 2010 were severe weather-related events.

Cars were swept down streets and creeks bobbing like little toys in the surging power of the torrent and were carried blocks away until dumped in mangled heaps as the force of the flood dissipated. Surprisingly only 2 people were confirmed dead after being swept away by the flash flood in Toowoomba but many more were heroically rescued by bystanders and emergency services personnel.

As some of the flood water found it's way down the escarpment it triggered landslides blocking the main highway to Brisbane. The people and houses in the small villages like Grantham in the Lockyer valley, part of the upper Brisbane river catchment, were subjected to a 7 metre flood wave, described by Queensland Police Commissioner Bob Atkinson as an "inland tsunami", devastating houses and everything in its path. Shipping containers, cars and debris were lifted and carried by the flood. Houses were torn from their stumps and swept along by the floodwaters with people crying for help inside.

The destruction has been compared with Darwin after Cyclone Tracy in December 1974. Several more deaths have been confirmed from the Lockyer valley with up to 60 people feared missing with warnings from the authorities that the death toll is likely to climb as waters recede and rescue teams can search the debris. Many people were rescued from roofs by helicopter.

Over a third of the state of Queensland has now been declared a disaster area. Towns like Warwick, Dalby and Chinchilla on the Darling Downs to the west of Toowoomba are now facing their second major flood event in two weeks with flood waters surging into the giant Murray Darling river system that may cause flood events in coming weeks as the water makes its way across the western floodplains through New South Wales to the Coorong and the Murray river mouth in South Australia.

Brisbane, the capital of the state of Queensland, is built on a flood plain and is now on full flood alert. A flood peak is expected in the next 48 hours.

Brisbane experienced its worst flood in 1974, with the Bureau of Meteorology and State Government authorities advising this flood may be even worse. According to flood modelling 9,000 homes and business may be subjected in the coming days to major inundation, and another 16,000 properties may feel minor flooding effects.

In the late 1970s authorities built the Wivenhoe dam for flood mitigation. The dam is now at 170% of capacity and is making controlled releases into the Brisbane river system. Dam operators have little choice but to continue the controlled release of waters to cope with the floodwaters upstream coming into the dam catchment. Without the dam Brisbane may have already suffered flooding.

Brisbane River floodwaters are now expected to surpass the height of the 1974 floods due to the amount of water released from the Wivenhoe Dam coming down the Brisbane River, the continuing rain and a King Tide expected at 3pm on Thursday.

The Prime Minister, Julia Gillard, has pledged any necessary assistance by Defence force personnel. Emergency financial assistance programs have also been established to assist people through the crisis. The Queensland Government has established a flood disaster fund, to be administered by the Red Cross, for public donations.

At it's expected peak on Thursday afternoon flooding will inundate parts of the Brisbane CBD to rival or exceed the 1974 floods. Tony Weber, an expert consultant in Catchment Assessment said "With the whole catchment now in a state of complete saturation, any subsequent rainfalls, even though they may not be record rainfalls, will likely result in extreme run-off events as we have seen in Toowoomba and the Lockyer Valley."

"Until sufficient drying of the catchment occurs (likely to be in the order of several weeks with no further major rainfall), there will continue to be a very high risk of further major run-off events." said Tony Weber, a National Practice Leader - Water Quality for Engineering and Environmental Consultants firm BMT WBM and Visiting Fellow at the Integrated Catchment Assessment and Management Centre, Australian National University.

Climate Change and the Queensland Floods

Climate change is a very real factor in the weather causing the extreme floods in Queensland, but to what extent is largely unknown. (Queensland's big wet, disastrous floods and climate change)

Global temperatures have increased by 0.8 degree C due to climate change. As the atmosphere warms it can carry more water which means greater and more intense precipitation. For each 1 degree of warming the capacity of the atmosphere to carry water increases by 5 per cent. So we have at least a possible 4 per cent attribution factor to climate change right there.

The Bureau of Meteorology have stated there is record sea surface temperatures around Australia combined with a strong La Niña/ENSO weather cycle which is creating this extreme weather.

According to Professor Neville Nicholls "The Queensland floods are caused by what is one of the strongest (if not THE strongest) La Niña events since our records began in the late 19th century . Our understanding of the La Niña and its impacts meant that the Bureau of Meteorology, as early as October, was warning of substantially increased chances of above average rain across eastern Australia. The La Niña is also associated with record warm sea surface temperatures around Australia and these would have contributed to the heavy rains."

"The extent to which any of this (the floods, the warm oceans, or the very strong La Niña) is linked to global warming is unknown, because the requisite studies to test this have simply not been done yet." concluded Professor Nicholls, who is an Australian Research Council Professorial Fellow in the School of Geography & Environmental Science at Monash University and President of the Australian Meteorological and Oceanographic Society.

Global warming contributes to increased sea surface temperatures which also generates the tropical rain fronts that have drenched Queensland over the last 5 months. There is a lack of scientific studies on how climate change may have impacted the El Nino/La Nina (ENSO) weather pattern.

Professor Neville Nicholls, an Australian Research Council Professorial Fellow at Monash University, said that no current link could be made between flash floods and global warming. He said that it was the strong La Nina event responsible.

"Is the La Nina that strong because of global warming, or is global warming exacerbating the effect of La Nina? Honestly, we don't know. But just because we don't now doesn't mean it's not happening. "You'd have to be a brave person to say it [climate change] is not having some sort of effect," he told the Australian Online.

The unfolding tragedy of the Queensland floods will continue with health related problems.

"There is an increased risk of outbreaks of Ross River virus and dengue infections in post-flood Queensland, particularly in these warm and humid conditions. Mosquito populations will now have much greater breeding opportunities." said Professor Tony McMichael from the National Centre for Epidemiology & Population Health at The Australian National University.

According to McMichael the flood experience elsewhere suggests the most frequently reported outbreaks of disease are likely to be Diarrhoea related (gastroenteritis) diseases, respiratory illnesses (prominent after Hurricane Katrina in the USA), and skin infections.

"Flooding also has a range of adverse effects on mental health. Long-term post-traumatic stress disorders are common. Deaths and serious injuries cause anguish, and bereavement often progresses to depression. 'Survivor guilt' may afflict those who are less affected or unscathed." said Professor Tony McMichael.

Disaster far from over

Queensland is waterlogged. September 2010 was Australia's wettest month in 110 years. The continuing rain just cannot soak in any more, hence the widespread flooding that is happening. As this is a particularly strong La Nina, it's effect is likely to be prolonged into Autumn bringing more tropical fronts and torrential rain to Queensland in coming months.

Summer is also cyclone season. If a major cyclone hits the Queensland coast more flooding events could result. The Bureau of Meteorology warned in October 2010 that Queensland may experience above average tropical cyclone activity due to La Nina, with up to six cyclones developing in the Coral Sea this season.

More extreme rain and flood events should be expected in the coming months.

In the weeks and months to come serious planning will also need to be undertaken to plan for and adapt to extreme events to take into account climate change from global warming.

“The recent flood events in Queensland are a clear indication of the need for improved planning to adapt future development for our settlements and infrastructure. With expanding settlements, extreme weather resulting in emergency situations can be expected to become more frequent with higher temperatures and climate change.” said Professor Ron Cox, from the UNSW School of Civil and Environmental Engineering, and the Convenor of the Australian Climate Change Adaptation Research Network for Settlements and Infrastructure (ACCARNSI). 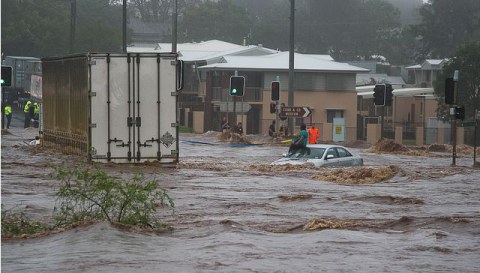 In Brisbane and feeling helpless for something to do to help?

Make some pies, cupcakes, similar other munchies and you can drop them off at these SES stations for volunteers and others affected by the floods. Only do so if safe to travel. The volunteers would really appreciate the support.

Re: Floods threaten Brisbane, one third of Queensland ...

It really breaks my heart. I have been to Victoria and New South Wales and have a deep appreciation for the Australian nature as well as many other aspects of that wonderful country.
Sadly Australia is going through tough years and unfortunately chances are that things will deteriorate in Australia as well as everywhere.
It was years ago when the deadly Victorian bush fire happened, the water level in many major rivers is going down and yet we have this flood. It just breaks my heart.
Bill