Global warming a potent brew for coffee and tea drinkers

Okay, climate change is now getting serious with global warming set to impact on the enjoyment of a nice strong cup of Assam tea or a good brew of Columbian coffee. Already the subtle flavors of Assam tea are starting to change. For the tea and coffee connoisseurs in the developed world we might find the price increasing on that skinny latte or cup of tea.

While we might bemoan subtle favor changes or price rises from the comfort of our street cafes and comfortable dwellings, the real hardship will be felt by the thousands of small growers in the developing world. Those who are dependent on tea or coffee as a major cash crop and boost to their local economies face the problems of increasing temperatures and changing rainfall patterns.

According to a report in The Guardian the cultivation of Assam tea in Northern India is being affected by global warming. Yields are reducing due to rising temperatures which is altering the flavor of highly distinctive and sort after Assam tea.

Mridul Hazarika, director of Tocklai Tea Research, identified rainfall and minimum temperature as two of the most important factors affecting both quality and quantity of harvests. "The decline has been taking place although there has been an increase in the area of tea cultivation as new gardens have come up, and many gardens have added new areas for tea plantation. This is an indication of the seriousness of the threat," said Hazarika in the Guardian report.

"Changes have already been observed in the flavor, but it is not possible to blame only climate change for this," he said. "Other factors like the fertilisers used and cultivation methods might also be partly responsible."

Changes in rainfall and increasing temperatures have also affected tea production in Sri Lanka and other tea producing regions. In the first three months of 2010 tea production from Sri Lanka fell by more than 41% - the largest drop in a decade. This produced a shortage of tea on global markets in early 2010 pushing up consumer prices.

Meanwhile, scientists from the Centre for Ecological Sciences at the Indian Institute Science have forecast that over the next two decades, the quality and quantity of coffee beans grown in India's southern states will suffer, and costs will escalate. The trend for rising temperatures and changes in rainfall patterns projected by Asian and Indian monsoon models indicate problems for plantation coffee production.

The two main species of coffee - Arabica and Robusta - grow in slightly different but narrow climatic bands. Arabica evolved in the Ethiopian highland forests with a dry season and an optimum temperature range between 15 °C and 24 °C, and rainfall between between 1500 and 2000 mm per annum. Robusta evolved in the African lowlands in areas with abundant evenly distributed rainfall through the year of around 2,000 mm per annum, optimum temperature ranges from 22 °C to 26 °C, and at altitudes ranging from sea level to about 800 metres. Robusta is less tolerant of very high as well as very low temperatures than is arabica.

Many coffee growers are small landholders with coffee being a major cash crop grown in the tropics from Africa to the Caribbean, South America, India and south east Asia. These landowners will need assistance in managing the threat of climate change through adapting agricultural practices, and sometimes diversifying into other crops. Reducing carbon emissions from coffee growing and earning carbon credits for reforesting coffee lands under the Clean Development Mechanism or REDD scheme may provide further transfer of wealth to the first world through subsidising carbon emissions in developed countries.

Stimulated by warming climate conditions, the coffee berry borer, has also become a huge problem destroying coffee crops in most coffee growing regions of the world.

A paper on Climate Change and the Coffee Industry (PDF) published by the International Trade Centre in February 2010 outlines the climate risks for coffee:

Rising temperatures are expected to render certain producing areas less suitable or even completely unsuitable for coffee growing, meaning production may have to shift and alternative crops will have to be identified. Incidences of pests and diseases will increase whereas coffee quality is likely to suffer, both factors that may limit the viability of current high quality producers. More coffee may need to be grown under irrigation, thereby increasing pressure on scarce water resources. All the foregoing will increase the cost of production whereas in the future fewer parts of the world may be suitable for coffee production. If so then the already evident growth in concentration could become even more pronounced, bringing with it an increased risk of high volatility. For example if an extreme event should severely curtail the output of one of the major producers.

So for us privileged consumers in the western world climate change will also hit us in our little luxuries: in our habitual consumption of tea and coffee. As you sip your Orange Pekoe relishing the flavors, or skimming the froth from your capuccino, or knocking back that double espresso, understand that global warming will affect our lives in big ways and small. 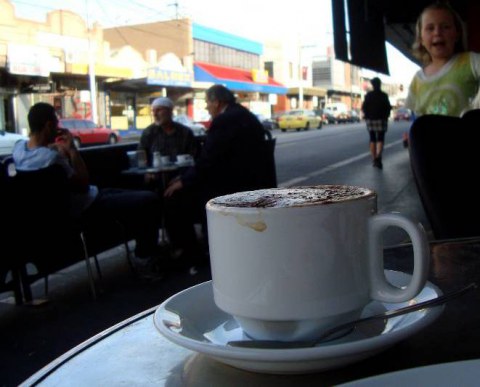 Re: Global warming a potent brew for coffee and tea drinkers

The Climate Change MISTAKE has done to progressivism, science and journalism, what Bush’s false war in Iraq did to the neocon’s reputation. SAVE THE PLANET is now seen by the voting public as just a veiled deceptive death threat to billions of children worldwide. Climate Change is not viewed now as pollution, energy, waste or responsible for bad weather. It was a failed 25 year old disco science theory that promised the effects from human CO2 to be from virtually nothing to unstoppable warming. It was a free pass for everyone. Up till now. Promising the end of the planet was not sustainable. What were we thinking people?
It is you faded remaining climate change believers that are the REAL neocons of hate and fear mongering that are hurting the planet and it's people as you divide environmentalism and drag progressivism down with it. You lovers of doom and misery and hate and fear, seemed to wish and pray for this crisis to have happened.
I will never trust anything ever again. We let Bush get away with HIS false war and we will not let you “unstoppable warming” WAR mongers get away without federal prosecution.
Green was mean. We needed LOVE, not CO2 death threats just to get my kids to turn the lights out more often.
History is both laughing and cursing each and every single one of you DOOMERS for leading us to a false war of climate variation.
If any of you remaining fear mongers still think this democracy will vote YES to taxing the air to make the weather colder, YOU are the new denier.
I am a Liberal Green Climate Change Denier. Drop the CO2 and begin Green Anew for the CO2 mistake will keep progressivism out of power for a decade.
A wave of denier rage from responsible environmentalists has arrived.
Now we face the future challenges of pollution, energy and waste with courage, not like climate cowards fearing the unknown like cave men.