A Geelong Magistrate today stated that activists who had blocked the gate of the Swan Island military facility had “acted in good consciousness” and in light of this, recorded no conviction, and dismissed the charges for 8 of the 9 defendants.The 9th defendant, who was arrested the same day she faced court for a similar action, was given a one month good behavior bond.

“This result is a vindication of our actions, and the community’s opposition to the Afghan war. It sends a signal that this war is wrong, and citizens should feel empowered to act against it” said one of the activists, Jessica Morrison.

In court, the activists talked about their community service, the atrocities of the Afghan war, and their efforts to stop this. All stated that they felt compelled to act in this way against the Afghanistan war.

“I take into account the guilty plea…I take into account that it was a nonviolent protest. It caused inconvenience but no harm….That all of you are worthwhile members of {the community} that contribute to society…that you conscientiously object to war….that one of you stated you feel disempowered by the Government’s response, and that this has been a motivating factor. Weighing up all considerations, I find it inappropriate to record a conviction for any of you” she went on to say.

On the 16th of June nine activists were arrested while blockading the road to Swan Island military base, a military installation heavily involved in supporting the war in Afghanistan. They were later charged with hindering police and obstructing a road.

Their action was on the same day of a court case for a previous action. On this day, the court dismissed charges by four activists, citing the character of the activists, and the contentiousness of the war in Afghanistan. In the previous action activists blocked the entrance and also entered the base and shut off equipment.

Swan Island is known as an ultra-secret clandestine warfare centre, used for training ASIS agents and Special Air Service Regiment of the ADF. ASIS is Australia’s overseas intelligence service.   Swan Island also serves as a communications centre with its own transmitters and receivers, and a control point for any Special Operations that may be launched. It is more secretive than the Pine Gap facility. On the 16th of June the nine activists were arrested while blockading the road to Swan Island military base, a military installation heavily involved in supporting the war in Afghanistan. 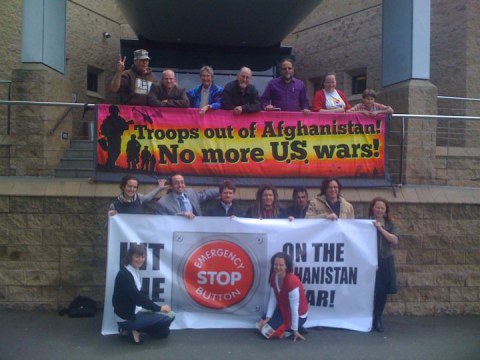