Hillary Clinton arrived in Melbourne today (6/11/2010) and will soon be joined by Secretary of Defence Robert Gates. These high level U.S. war criminals will then be meeting the Prime Minister and other politicians as part of the annual AUSMIN talks in Canberra on Monday. The whole visit and itinerary has been kept secret, supposedly for "security" but more likely to prevent any public protests against U.S. imperialism and the U.S. Australian alliance. On the agenda for the talks include the development of new U.S. bases in Australia, escalation of the conflict with Iran and of course Australia's involvement in the increasingly bloody Afghan war. If anyone has any details of any snap protests planned please post ASAP.

Reports from the mainstream press reveal the visit is part of the Gillard government's increasing involvement in the U.S. War machine.

A new U.S. Space Warfare Base in West Australia
Robert Gates is expected to announce the building of a new U.S. base at the Harold E Holt Naval communications station at Exmouth in West Australia. Laughingly defended in The Australian as not US bases as such, but truly joint facilities, this base is squarely aimed at ensuring the U.S. continues to militarise space and achieve hegemony down here on earth. It is being presented as a response to China’s 2007 shooting down of old satellite, which is again laughable China’s action was in itself a response to U.S. moves to use space for its own military ends. Whatever the case, like Pine Gap, Australia is again providing essential support to the U.S. nuclear war machine, a contribution more important in reality than any contribution of a few thousand troops in Afghanistan or Iraq.

More U.S. naval ships to visit Australian ports
As part of the U.S. projecting its military power into the Asia Pacific to contain Chinese power, we can expect more nuclear armed and powered vessels in Australian waters.

Preparing for war on Iran
As the U.S. prepares the option of military action against Iran, according to the Australian The two sides will enhance co-operation on Iran. A sinister phrase given Australia’s involvement in both the initial invasion of Afghanistan and its membership of the “Coalition of the Willing” in the illegal invasion of Iraq.

Hilary Clinton is apparently also giving a televised discussion with “young Australians” at a secret location tomorrow on Sunday. To submit questions visit this site for details .

It is a real shame that due to the secret nature of this visit, Australians did not have the opportunity to show what they thought of the criminal nature of the U.S. wars in Afghanistan, Iraq and elsewhere around the world and to declare that we don’t all agree that Australia should blindly follow and support the U.S. in its new Cold War with China in the Asia Pacific.

To protest the Afghan war though please consider attending a demonstration in Melbourne on Friday 12th of November.

Visit some Australian peace web sites to learn more about the campaign against Australia’s involvement in the U.S. war machine 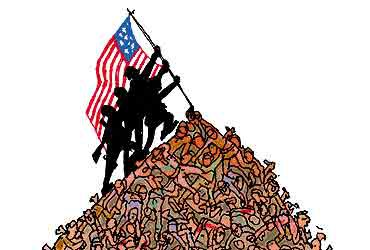 Re: U.S. war criminals in Oz as Australia boosts its ...

Sydney Stop The War Coalition organised "Shoe Away The War Criminals" lunchtime protest outside the US Consulate in Martin Place Sydney as US Secretary of State Hilary Clinton and US Secretary for Defense (War, actually) met with PM Julia Gillard & Foreign Minister Kevin Rudd in Melbourne to discuss ongoing military collaboration between the two governments. In the days leading up to the protest police initially threatened to arrest any shoe throwers but backed off on the day.

Australia aligns with US against China’s geo-political rise.
By James Cogan
9 November 2010

The underlying theme of the 25th annual AUSMIN talks between the American and Australian governments yesterday in Melbourne was Washington’s alarm over China’s growing economic strength, military reach and political assertiveness in the Asia-Pacific. The Obama administration is attempting to forge a network of strategic and military alliances to contain Beijing and challenge its efforts to assert greater regional influence.