The Victorian parliament tackled climate change on Friday with a climate bill passed in the Legislative Council with support of Liberals and Greens members to set a 20 percent emissions reduction based upon 2000 levels by 2020. "This is a significant Bill which has the potential to stabilise and then drive down our greenhouse emissions, while also creating certainty for investors and industry, and many new jobs across the state," said Friends of the Earth (FoE) campaigns co-ordinator Cam Walker.

It follows the lead in August by the minority Labor and Green ACT Government announced cuts to greenhouse gas emissions of 40 per cent by 2020, and 80 per cent by 2050, based on 1990 levels.

The targets and programs announced in the Victorian bill were part of Premier John Brumby's climate announcement which included large scale solar feed-in tariff and a 25 per cent renewable energy target by 2020 during the recent federal election campaign. The announcement embarrassed the Federal Labor party and their lack of effective policy action on climate change. State Governments around Australia have deferred taking substantive action on climate change waiting for national action on setting a carbon price that has failed to materialise because of the intense adversarial politics on the issue by both the Labor and Liberal parties.

"In spite of the lack of federal leadership on the issue, or a global agreement on climate, Victoria has taken another significant move that will allow us to start to reduce our emissions". said Cam Walker. "This legislation, which was first promised in 2006, has been a long time coming. The legislation passed today is stronger than what was contained in earlier versions of the Bill".

"The government has already indicated that it will act quickly to implement the measures contained in the Bill and the Climate Change White Paper and we urge them to do so. We also call on the Premier to intervene and rule out any further coal developments in the state, such as the proposed HRL coal fired power station. The proponents of the HRL development are currently re writing their application, in the hope they can bring their average emissions below the new emissions intensity levels enshrined in the Bill". said Cam Walker in a FoE media statement.

During the debate in the legislative Council Greg Barber, leader of the Greens, said that state governments have always had the strongest tools for tackling climate issues "State governments control land use, they control transport policy, they set the building codes, they have tree-clearing controls, they own the natural ecosystems and they even own the actual physical coal and resources. If at any time in the last 11 years the Labor government wanted to take strong action in this area, it had the chance."

"With this bill the EPA would be able to directly control the emission levels of those big polluters." continued Greg Barber, "There is no walking away from it: this is a good step by the Brumby government. Labor could have done it in any time in the last 11 years. It now has the next 86 days to convince the Victorian public that it is fair dinkum about using the tool it has just armed itself with, but there is no getting around it: it is an extremely important threshold to be crossed."

The legislation received qualified support from the opposition who moved a number of amendments, although the contribution of Bernie Finn, from the Liberal party for the Western Metropolitan Region in the Legislative Council showed that scepticism of climate science and the human contribution to climate change is alive and well in the Liberal Party.

"This is a con; the whole thing is a con. Today we are in the Parliament of Victoria wasting our time on something that is largely an invention of the left. I am not suggesting for a moment that the climate does not change. I think that is a natural phenomenon; it has been happening for thousands of years." said Bernie Finn in the debate on the climate bill according to Hansard (Legislative Council Sep 3 PDF)

Bernie Finn obviously echos the unscientific beliefs of Federal Liberal Party leader Tony Abbott who stated before the 2010 election that climate change is "absolute crap". As recently as 19 May 2010 the Federal Liberal Party published a 47-page document titled 'Rebuilding Sustainable Prosperity' which stated on page 45 (Liberal Party PDF): "Climate change is a special challenge. There is some debate as to: Whether the planet is warming; If it is warming, whether human activity is contributing to that process; If the first two points are true, whether there are negative consequences." This statement flies in the face of climate research and scientific evidence of thousands of scientists in the IPCC who have urged action since 1990 and the recent joint statement by the Australian Bureau of Meteorology and CSIRO, and climate facts statement by the Australian Academy of Sciences.

The Brumby Government have moved on climate change because they have seen the issue play a prominent role in Federal politics in the defeat of John Howard in the first climate change federal election, the rolling of Malcolm Turnbull, the sacrifice of Kevin Rudd, and the rejection of both Julia Gillard and Tony Abbott by voters with a hung Federal parliament in the second climate change federal election. Expected high votes for the Greens in the inner city state seats of Melbourne, Brunswick, Richmond and Northcote are a challenge for the Labor Party and hence the attempt to neutralise the climate issue by Premier Brumby.

Climate issues are resonating in Victoria with Environmental and climate activists active in campaigning for the closing down of the Hazelwood Power Station, one of the dirtiest coal fired power stations in the Industrial World. The Premier has committed to closing down a quarter of the generating capacity of Hazelwood by 2014 subject to finance assistance from Federal funds to compensate the operator International Power.

The positive announcements by John Brumby in making Victoria a leader in renewables technology with the solar feed in tariff and 25% solar and wind energy target by 2020 is also a response to the Beyond Zero Emissions and Melbourne University's Melbourne Energy Institute plan for how Australia could transition to 100 per cent renewables by 2020. The Beyond Zero Emissions plan was costed at $370 billion over 10 years to develop large scale solar power stations and wind farms across Australia and substantially upgrade and build an electricity transmission grid to maximise power generation resources. The plan of How to achieve Zero Carbon Emissions by 2020 was launched in July 2010 but received no support by Liberal or Labor parties and little media commentary during the Federal election. But it is evident the Victorian Premier took notice. 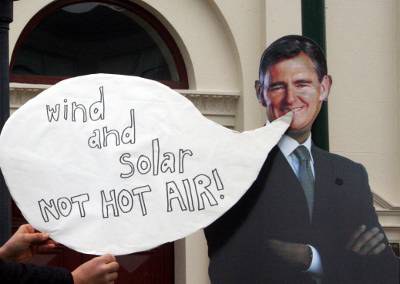