Farmers and conservations took to the streets of Brisbane protesting the increasing encroachment and damage to prime agricultural farm land and the environment by the rapacious coal mining industry. While the rally proceeded outside Parliament House, two activists managed to evade security and to unfurl a banner from high up on the Parliament House facade that said "Don't undermine our farms"

Hannh Elvery from Six Degrees told the rally "We want to hand our environment, our farmland intact to future generations."

"As the Queensland Government invests bilions of dollars in the doubling of our coal export industry, in the expansion of coal mining all across this state. As they allow, approve, encourage the digging of 40,000 coal mines and gas wells in the Darling Downs alone, what is the real price for our children, what is the real price for our communities, for our water resources."

Greens Senate candidate and environmental lawyer Larissa Waters told the rally that she would call for a moratorium on Coal Seam Gas (CSG) projects.

As the rally moved to the entrance of Parliament House they were stopped by a row of police. With calls for the Premier Anna Bligh to come out to meet the crowd a chant started "They come out or we go in".

The appearance of Friends of the Earth activists Bradley Smith and Dhruba Horsfal on the parliament house roof diverted the attention, and the unfurling of the banner ws made to cheers from the crowd.

Bradley Smith and Dhruba Horsfal were later arrested and charged with unauthorised trespass of parliament and high-risk activities.

Interesting charges given the protestors are alledging the mining is risking prime agricultural land, the pisoning of rivers and the Great Artesian Basin, and the health of residents in rural communities.

The Six Degrees coal and climate campaign reports the Prime agricultural land protest movement strengthening. Residents at Aldershot have vowed to fight a new coal mine which residents say will threaten the water of the Mary River. Last week residents of Collinsville blockaded the trainline to protest a planned increase in the number of coal trains through the town from the Bown Basin to 50 to 70 a day. 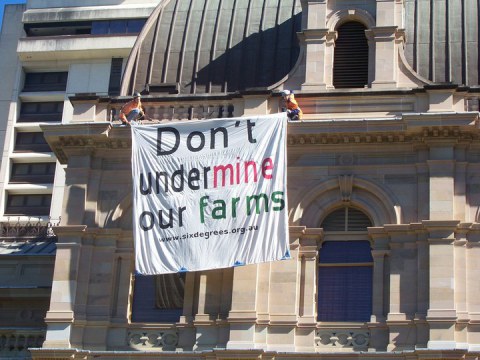