A group of Traditional Owners from Muckaty are currently in Melbourne in connection with a court challenge to Government plans to build a nuclear waste dump on their land. This morning they attended the launch of a billboard in Northcote funded by supporters of the Australian Conservation Foundation, and this afternoon they followed this up by joining members of Friends of the Earth ACE collective and others outside the office of Federal Resources and Energy Minister Martin Ferguson. They wanted to deliver a letter for the Minister, but the office was locked…

This weekend will see the start of the 2010 ‘Nuclear Freeways’ campaign, designed to highlight the implications of transporting radioactive waste from Sydney’s Lucas Heights reactor to the projected waste dump site in the Northern Territory – see http://www.nuclearfreeways.org.au/. 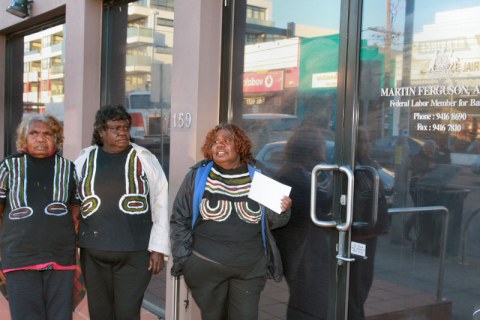 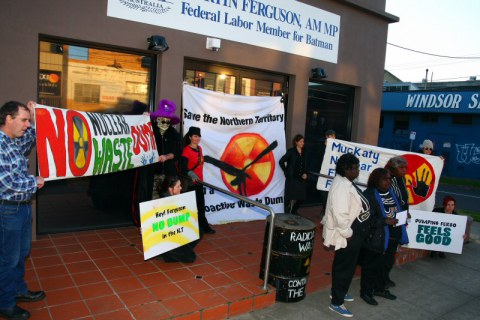 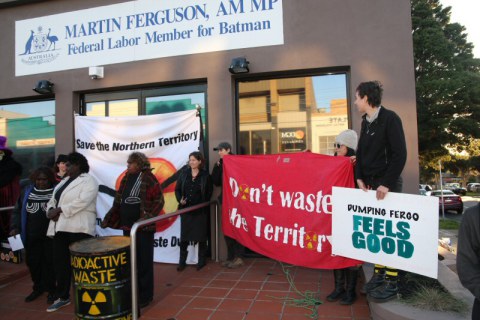 ABORIGINES from the Northern Territory are calling on Darebin residents to get behind their campaign to stop a nuclear waste dump on their land.

Five traditional landowners from Muckaty Station last week joined anti-nuclear campaigners and lawyers in unveiling a billboard in Northcote, which is in Resource and Energy Minister Martin Ferguson’s Batman electorate, which covers Preston and Reservoir.

The words on the billboard read: “He won’t listen to us but he answers to you. Tell Minister Martin Ferguson to stop his plan for a radioactive waste dump in the NT.”

Traditional landowner Diane Stokes said she and leaders from four of the five clan groups had not been consulted about the proposed dump that one family group had agreed to for $12 million.

“We don’t want the waste dump because it will affect us all,” Ms Stokes said.

“Our dancing relates to the ground and the soil where they want to put the dump, and this is one of the main reasons we don’t want it. The dancing we are talking about is important cultural dancing, not a disco dance.”

Mr Ferguson told the Leader he had nothing to do with the identification of the Muckaty Station site, which was nominated by the Northern Land Council, on behalf of the Ngapa clan, in 2007.

“The land was identified as a result of the indigenous decision-making process, something that I’ve always respected,” he said.

“If this is now contested, so be it.

“I will in no way interfere with the indigenous decision-making process, including the determination in the courts.”

The Australian Conservation Foundation paid for and authorised the billboard.