The missing words at Julia Gillard's first address as Prime Minister to the National Press Club was "climate change". Outside the building Climate activists from Rising Tide Newcastle had dumped a ute full of coal at the entrance. The protesters called on the Gillard Government to announce a climate change policy that addresses Australia's principal source of greenhouse pollution - coal.

While the protesters chanted outside the front entrance Gillard was chaperoned through a side entrance into the club.

"Australia is already the world's biggest coal exporter, and coal exports are our nation's biggest contribution to the climate crisis. Yet coal corporations in New South Wales and Queensland are planning massive expansions of up to eleven-fold over coming years." concluded Steve Phillips, "Gillard must put a moratorium on the expansion of the coal mining and export industry, and start replacing coal with sustainable, renewable alternative industries."

Inside the press club Gillard's speech did not make one mention of climate or climate change policy, but focussed on the economic and social credentials of the Government. The upcoming eletion campaign will be "clean and green" she said, "but mostly lean."

Outside Greenpeace spokeswoman Trish Harrup told reporters "The policy vacuum created by Labor is being filled with pollution."

According to a Stock and Land article cabinet discussed on Tuesday climate change policy which may include setting an interim carbon price to be implemented sometime in the next two years, as well as other measures.

The electorate waits for the release of this climate policy. It may prove the make or break of the Gillard government campaign for re-election.

Yesterday Climate Change minister Penny Wong unveiled new funding for the National Solar Schools Program - grants of up to $50,000 ($100,000 for multi-campus schools) which are awarded to eligible primary and secondary schools to install solar and other renewable power systems, rainwater tanks and a range of energy efficiency measures. The Program was temporarily suspended in October 2009 due to high demand.

"More than 1000 schools across the nation have already installed solar systems under this program, and another 1500 schools have projects underway to become solar schools," Senator Wong said. “Since the program began in 2008, about 6 MW of renewable solar power has been installed in schools – the equivalent of meeting the electricity needs of 1200 average households each day.

But the tight timing for the National Solar Schools program refunding has been criticised by one solar energy supplier, Energy Matters, "the timing isn't ideal given many schools are in the midst of a break and some school administrators are on well-deserved leave." said Energy Matters co-founder Max Sylvester "We fear the narrow time-frame will see many deserving schools miss out on playing a larger, crucial role in addressing greenhouse gas emissions and slashing their coal-fired related electricity consumption."

As demand is so high for solar power, the Government needs to seriously consider the action plan Zero Carbon Australia 2020 to transition from coal powered electricity generation to renewable energy.

Perhaps as a start our Prime Minister should install solar panels on the Lodge as a symbolic action of leadership. 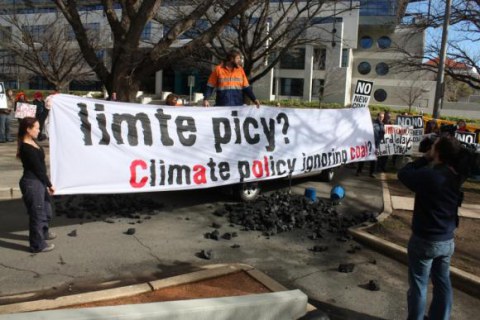