Sex workers in Australia joined thousands of other sex workers around the world to celebrate and commemorate the 35th anniversary of International Whores Day the 2nd June. A diverse range of events are being held around Australia over a week of celebration. On Saturday June 5 2010, Scarlet Alliance marched from the Sydney Opera House to celebrate this occasion and to protest against the lack of anti-discrimination protections afforded to sex workers.

Sex workers have rallied in Sydney to demand an end to "whore-phobic" attitudes and greater protection under anti-discrimination laws. Chanting "sex worker rights are human rights" and "no bad whores, just bad laws", dozens of protesters marched from the Opera House on Saturday in a bid to have their rights recognised.

Many carried red umbrellas, a symbol of the global movement, while others made statements with T-shirts reading "whore power" and "sluts unite".
"We are human beings, we are people, we do a job and we are continually vilified for that job," sex worker Julie Bates said, noting that little had changed in the way of community attitudes during her 30-year career.

"So whilst we remained silenced ... today is a chance for us to speak to the community, so we have a voice. "What we want society to see is that sex work is real damn hard work, and ... we provide a service like any other industry."

Organised by the Scarlet Alliance, a peak body representing the nation's estimated 20,000 sex workers, the event was one of several staged in capital cities across the country on Saturday to commemorate International Whores Day.

The alliance is using the occasion to lobby state governments for amendments to existing legislation that covers the industry. The campaign focuses on NSW, which has the highest concentration of sex workers - about 8,000 - yet has inferior anti-discrimination laws compared with other parts of the nation.

In the ACT, Queensland and Tasmania, legislation protects against discrimination based on legal sexual activity or occupation, essentially giving mistreated sex workers an avenue for recourse.

The most common instances of discrimination reported to the alliance occur during applications for rental properties, bank loans and credit cards.

Sex workers are also forced to pay up to five times more than other advertisers in newspapers, and encounter problems when dealing with police and the judicial system, the alliance said.

It was often seen when women lost custody cases because of negative stereotypes associated with their jobs. Alliance president Elena Jeffreys said part of the problem stemmed from deep-rooted attitudes within government and mainstream institutions.

"They think that sex workers are not part of the community," she told AAP. "We are absolutely sick of whore-phobic attitudes.
"Sex work is legalised, decriminalised, brothels are run in a professional and transparent manner, and sex workers are huge contributors to society, yet we face this discrimination every single day. "It's absolutely untenable and we demand that it be changed." 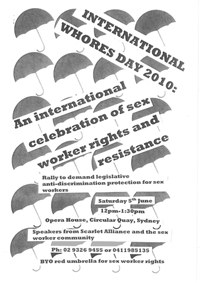 i agree..sex workers are also humans and we should respect them equally.they just do a job to earn bread nothing else.