Protests condemn Israel over attack on humanitarian flotilla to Gaza

Protests in Australia condemned the Israeli attack on the humanitarian aid flotilla to Gaza resulting in the death of 10 civilians and injuries to 30 more including to one Australian. 1500 people listened to speakers and marched through the streets of Melbourne on short notice. In Sydney a crowd of 4000 people marched and listened to speakers with passion and anger. Other protests were held in Brisbane, outside the Israeli embassy in Canberra, and 150 people attending a protest in Perth.

Melbourne protest organiser Kim Bullimore said of the Israeli commando attack on the flotilla: "This is absolutely outragous, this is absolutely shameful. We should be calling it what it is. It's a massacre," she said. The crowd observed a minute's silence for victims of the attack.

Many people from the middle eastern community gathered in Sydney Square next to the Town Hall where they were addressed by speakers. Stuart Rees from the Sydney Peace Foundation urged people to contact Prime Minister Kevin Rudd and local MPs. "Ring up Mr Rudd's office, ring up your local member of Parliament," he said. "The Australian government has to find the courage to say no to violence in the Middle East."

NSW Greens MP Lee Rhiannon urged "The Australian Jewish community needs to add their voice to your voice," she said.

Report from Sydney: Sydney streets were tinged with anger and passion by Antony Lowenstein.

Report from Melbourne and other cities:Protests against Israel across Australia and the world from the Socialist Alliance website

Five Australians have been confirmed as being part of the humanitarian aid flotilla to Gaza. The Foreign Minister Stephen Smith has confirmed one of the Australians has been shot in the leg and is currently in detention receiving hospital treatment, while the others are also being detained by the State of Israel.

While Steven Smith called for a "credible investigation", he supported Israel's military action as "self-defence". Ausralia's diplomatic response is subdued, particularly in the light of the recent expulsion of an Israeli diplomat - a Mossad agent - over the State of Israel forging Australian Passports for assassination of Hamas strongman Mahmoud al-Mabhouh in Dubai.

Even the UN Security Council managed to condemn the deadly Israeli attack on the humanitarian flotilla in more stern words than the Australian Government, and called on Israel to immediately release the ships and all civilians, allow the countries involved to retrieve their deceased and wounded, and ensure the delivery of the humanitarian aid aboard the ships to Gaza.

The US based Jewish Voice for Peace organisation has condemned the attack saying that "Israel has blood on its hands." with the attack being "just another deadly escalation of Israel's harsh repression of nonviolent protests against the occupation, paid with American tax-dollars."

The group called for President Obama to call for an immediate lifting of the siege of Gaza and support an international and impartial investigation into the tragic killing of civilians in a humanitarian mission. Jewish Voice for Peace also called for President Obama to suspend military aid to Israel while there is concern American aid may be used to commit similar abuses.

Greta Berlin of the Free Gaza Movement who co-ordinated the aid flotilla said that two more ships were being readied to head to Gaza in another attempt to break Israel's isolation of Gaza. The boats are expected in the region at the end of this week or early next week. "This initiative is not going to stop," she said from the group's base in Cyprus. "We think eventually Israel will get some kind of common sense. They're going to have to stop the blockade of Gaza, and one of the ways to do this is for us to continue to send the boats." she told Associated Press.

Egypt has announced that it has lifted it's blockade of the Gaza strip for several days.

Further protests have been called for Sydney and Melbourne 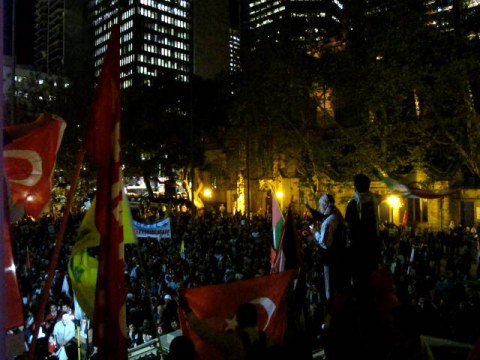 The Age covered the Melbourne rally, including a short video of the event

Re: Protests condemn Israel over attack on humanitarian ...

where is your report of the rally?

Hi Benny, Did you take any pics? or do you know of others who took pics?
Then post them. Or put them up on flickr or photobucket, etc and post the link.

If you spoke at the Melb rally, where is your report of the rally? what did you say? what did other speakers say? what were the chants, the hand written placards?

This is a user contributed activist news site. It is only as good as the contributions from me and you and many others make it.

Hope someone gets pics for Indymedia from the weekend rally.

Huwaidi Arraf - U.S. Activist tells of being beaten and hooded by Israeli commando's

Re: Protests condemn Israel over attack on humanitarian ...

A criminal act against international law

Israel's attack on the peace flotilla carrying humanitarian aid for the people in Gaza is a criminal act against international law - http://www.european-left.org/english/home/israels_attack_on_the_peace_fl...