"Why don't the people get rid of the lizards?"

"why don't the people get rid of the lizards?" said Arthur Dent. Well it seems the people are doing very well at getting rid of the lizards, due to climate change. Yep, it is our carbon emissions which is driving up global mean temperatures, altering the climate and driving lizards, Koalas and other species to extinction. The quote from Arthur Dent comes from Douglas Adams explaining the concept of democracy in the Hitchhikers Guide to the Galaxy.

Unfortunately, it seems we are getting rid of the wrong lizards - the ones with four feet that eat insects and are important prey for other small carnivores. That just leaves the cold-blooded political Lizards we have elected to office, still in charge and warming themselves in the glow from the fossil fuel vested interests.

"Odd," said Arthur, "I thought you said it was a democracy."


"So," said Arthur, hoping he wasn't sounding ridiculously obtuse, "why don't the people get rid of the lizards?"


"You mean they actually vote for the lizards?"


"Because if they didn't vote for a lizard," said Ford, "the wrong lizard might get in. Got any gin?"

From So Long, and Thanks for All the Fish by Douglas Adams. Douglas Adams also did a book and a video about endangered species - Another Chance to See. I think he would be horrified with the most recent scientific study released and published in Science and making media headlines about the global extinction of lizard species (the four footed cold blooded ones)

A team of international biologists said that up to 20 percent of all lizard species are predicted to go extinct by 2080 and that ongoing extinction of populations is directly related to climate change.

"We did a lot of work on the ground to validate the model and show that the extinctions are the result of climate change," said Barry Sinervo, professor of ecology and evolutionary biology at the University of California, Santa Cruz "None of these are due to habitat loss. These sites are not disturbed in any way, and most of them are in national parks or other protected areas."

While some species are already doomed due to the inertia in the carbon system, many of the extinctions projected for 2080 could be avoided if global efforts to reduce emissions are successful suggested the researchers.

The research was published as a report titled Erosion of Lizard Diversity by Climate Change and Altered Thermal Niches in Science dated May 14, 2010 under the lead authorship of Barry Sinervo.

The report abstract states in full:

It is predicted that climate change will cause species extinctions and distributional shifts in coming decades, but data to validate these predictions are relatively scarce. Here, we compare recent and historical surveys for 48 Mexican lizard species at 200 sites. Since 1975, 12% of local populations have gone extinct. We verified physiological models of extinction risk with observed local extinctions and extended projections worldwide. Since 1975, we estimate that 4% of local populations have gone extinct worldwide, but by 2080 local extinctions are projected to reach 39% worldwide, and species extinctions may reach 20%. Global extinction projections were validated with local extinctions observed from 1975 to 2009 for regional biotas on four other continents, suggesting that lizards have already crossed a threshold for extinctions caused by climate change.

Douglas Adams would be turning in his grave that we are well on the way at getting rid of the wrong lizards. Oh well, I hope everyone has their towell ready to hitch a lift from a passing spaceship. At the rate of destruction from climate change who needs a Vogon Constructor Fleet to destroy Earth for a hyperspace bypass? Humans and the Lizards they elect are destroying it quite adequately enough. 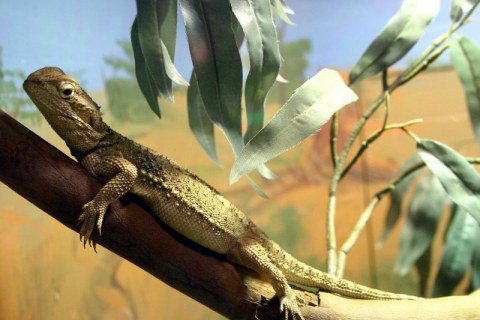