The rally was held in Brunswick at the Free Speech memorial on the corner of Glenlyon and Sydney Roads, near where a free speech campaign was run (and succeeded) in 1933. The rally had a wide degree of support including from several councillors, The Greens, the radical left, union activists and community groups. By coincidence, May 8 is the 40th anniversary of the first Vietnam Moratorium march which saw 100,000 people on the streets of Melbourne in opposition to conscription and the Vietnam war.

But the focus of the rally was the harassment of community stalls at the Barkly Square Shopping Centre. As several speakers pointed out, the issue goes far beyond one shopping centre.

Brian Walters told the crowd that Kevin Rudd had performed another policy backflip to not introduce a Human Rights Act in Australia which would have protected the right of free speech in this country. "At the moment there is not a right protected in our law of free speech. There is in Victoria to a limited extent. But we need to have a comprehensive protection of the right for freedom of expression." he said in his speech at the rally (Video of Speech).

Greens member Cyndi Dawes said "I don't want to live in a place where everything is sterile and when you gather as a group or you bump into your neighbours the only ideas you are likely to encounter is how cheap you can buy the orange juice and which brand is on special."

Brunswick is a cosmopolitan inner suburb of Melbourne with strong liberal, radical and workingclass traditions. "One of the fabulous things about moving around Brunswick is any Saturday morning there will be five or six stalls or groups of people handing things out, having a talk, getting up and having a rant about something that really matters to them. I want to live in a place where we can still do that." said Cyndi Dawes.

Trent Hawkins helps run a regular Socialist Alliance stall at Barkly Square which is feeling the harassment of shopping centre security and the police when they are called. "I've been at the stall for a few weeks and I've had the police come up. There is this very annoying security guy who comes over as if he's got a lot of power and control, gets the cops to try and shut us down. They just expect we gotta shut up in fifteen minutes and we want you out of here." he said.

"At some point not very long ago we took that land off aboriginal people, denied them the right to a say over how their land was used, and systematically denied them that right. So on what basis does this institution have any right at all." raised Trent Hawkins.

The rally was attended by a number of construction workers from two local jobs and CFMEU state president Ralph Edwards. The Organiser told the crowd "The right to free speech has to be fought for everyday. We are here now after the fight was taken up back in the 30's and we are commemmorating the free speech fight that took place then."

Construction workers work under the punitive supervision of the Australian Building and Construction Commission established by Prime Minister John Howard and continued by the Rudd Labor Government. The Commission has powers which are the same as those powers exercised in relation to terrorism.

The carpark entrance is where community group stalls often setup. Centre management authorised 'community stalls' are allowed to setup on the shopping concourse inside.

Further speeches were made by representatives of diverse community groups. David Nunn, a representative from 'A High School for Coburg' said that if community stalls were excluded from Barkly Square, the same would happen in Coburg. Ellen Roberts from Climate Action Moreland spoke on the need to communicate with people on climate change as politicians had failed to take action. Peter Riley from the Wednesday Action Group told of the harassment by security and the right of groups to use the Federation Square public space. Debbie Brennan spoke on the Campaign for Women’s Reproductive Rights in East Melbourne.

Just as speeches were winding down and people were about to disperse, two policemen arrive in a squad car. I daresay Centre security had put in a call for the police to attend. The two officers looked to be slightly overwhelmed, took some details, and promptly left. 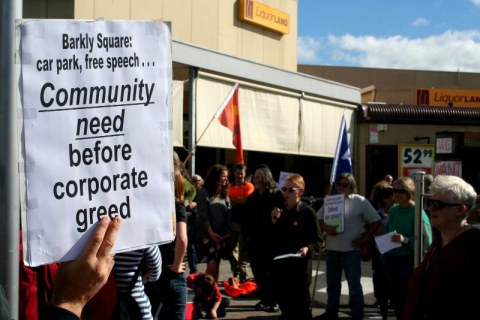 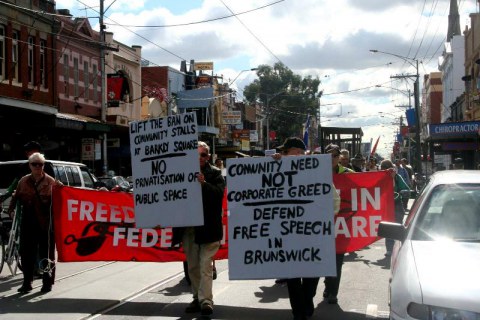