At 1.30pm on May 1st activists dropped a banner reading "Rising Rents = Rising Homeless" from the seventh floor of an overpriced apartment block across from Flinders Street train station. The action was taken in solidarity with similar events being held across the US by the Take Back The Land group (takebacktheland.org) and highlighted the rental rip offs taking place in Melbourne, including landlords charging $480 a week for tiny spaces in the building from which the banner was hung. Passersby, including a huge contingent of the undead taking part in a Zombie walk, gave the banner the thumbs up. Flyers highlighting the human cost of the city's rental crisis (text below) were also handed out. Those involved in the action plan to come together in the coming months to launch a new version of the Melbourne Squatters Handbook and organise further actions. For more information contact: renegadeactivist@gmail.com

RIP OFF
What percentage of your wages is spent on rent?

The housing crisis is affecting everyone. We all know someone with a horror story about housing prices.

A report just released by the National Housing Supply Council states that the housing shortage has reached 200,000 homes, while at the same time one in ten properties in Australia are being left vacant!

There are over 15,000 homeless people in Melbourne. For many people, homelessness is not temporary.

Some rooming house operators are taking advantage of the situation by setting up short term rooms for very high rents in appalling conditions. In January 2008 three international students died in a rooming house fire in Footscray. The students were “hot-bedding”, that is, they shared rooms and took shifts to sleep because they could not afford their own bedrooms. In 2009, there were about 150 Indian students hot-bedding in the City of Moreland alone. In 2007, two people died in a Brunswick rooming house fire.

We are taking this action because we don’t want to see our rent money going to dodgy landlords who take no responsibility for our homes. Because we don’t want public housing privatised through Public Private Partnerships, and because everyone has a right to live somewhere with dignity. Because rising rents mean rising homelessness and the rental rip off must stop. 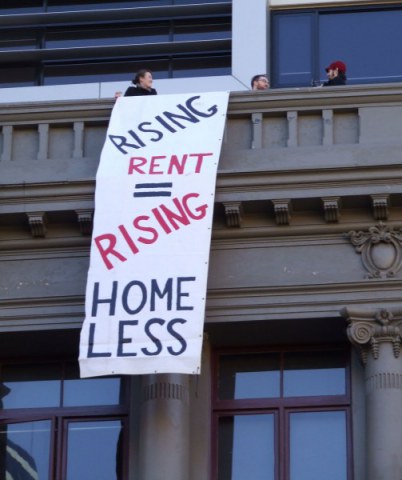 Re: May Day Housing Action: Melbourne

Re: May Day Housing Action: Melbourne

we got video and more pics to my knowledge. Don't know who has it though, i guess i'll post it if i can find out.

Re: May Day housing action: Melbourne

A meeting has been set to discuss future actions on Tuesday 26th May at 6pm at the Renegade Activist office on the 4th floor of Trades Hall. Enter via lift in rear building.