Punishing the people who stand up for the common good

"It's a tragedy that the people who are responsible for the climate catastrophe get rewarded, while the people standing up for the common good get punished." said Greenpeace activist Kristen McDonald after leaving a Mackay courtroom this week. She was one of fifteen Greenpeace activists convicted and fined on charges of Unregulated High Risk Activity and other charges during a three day occupation in August 2009 of the Abbot and Hay Point coal terminals near Bowen, Queensland.

The majority had no conviction recorded, and fines ranged from $300 to $750. According to Greenpeace, the judge acknowledged that the activists' views were genuinely held, but said he was 'miffed' that the activists tried to highlight the issue, because 'the public is already well aware of the issue' and that our views are 'held by the majority of the community'.

Outside the court Greenpeace Australia Pacific's CEO Linda Selvey told reporters that the future of Queensland and the environment is being sacrificed for the short term profits of the coal industry and that the public concern on climate has not been translated into strong leadership by Governments on this issue. "While we continue to expand our coal industry in Australia and continue to increase our carbon dioxide emissions, Greenpeace will continue to take action," she said.

The charges against the Esperanza captain, Vladimir Votiacov, will be heard in Mackay Magistrate's Court in May 2010, for failing to comply with Harbour Master's direction, for navigating a ship in a pilotage area without a pilot and operation of a ship which endangers safety. The piloting of the Esperanza into the coal loader area effectively blocked all access by waiting bulk carriers.

The three day coal blockade occurred at Abbot Point and Hay Point coal loaders, near Bowen, Queensland from 4th to 6th August 2009 and involved the Greenpeace ship MV Esperanza. Hay Point is one of the world's largest coal export terminals. About 30 per cent of export coal originates from Australia.

"I can see more than 12 coal ships waiting to load coal behind me. There are mountains of coal. It is a bit overwhelming - tonnes and tonnes of it. Eveything I see here means to me that there's one more family that will be affected, one more child that won't have the future they deserve." said Fenton, a Fijian activist speaking while locked onto the Hay Point coal loader.

It is estimated the three day blockade may have cost BHP Billiton Mitsubishi Alliance who own and operate the coal port up to $20million in lost productivity, and a loss of about $1.5 million in revenue in the form of coal royalties to the Queensland Government.

See photos of the action from August 2009 on Greenpeace Australia Pacific Blog. 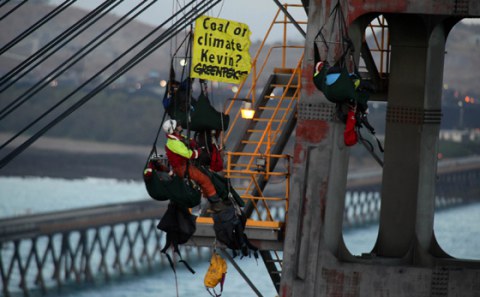 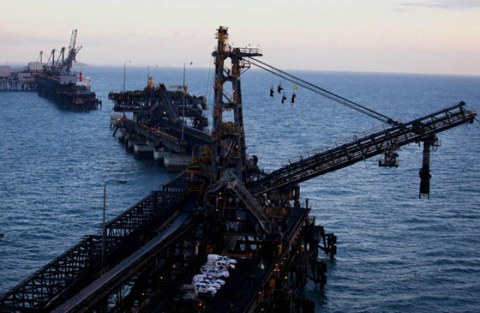